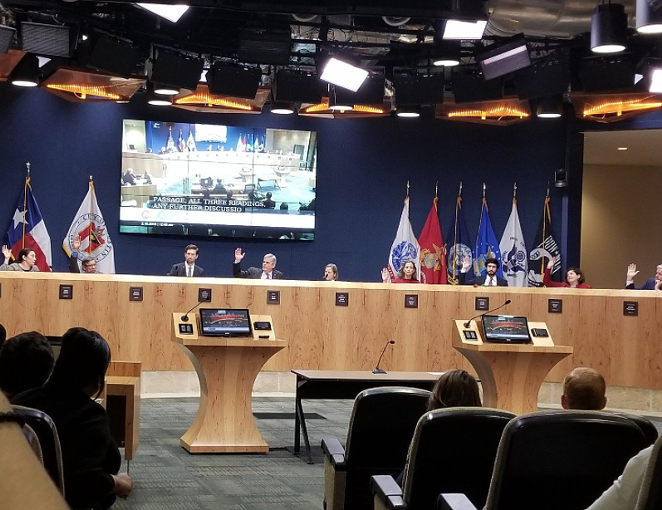 Starting October 1, all Austin residents will be guaranteed six to eight paid sick days a year — making the city the first in Texas to regulate sick leave.

Austin City Council made the historic decision early Friday morning with a 9-2 vote, after hours of public testimony from nearly 200 Austin residents.

“For me, so much of this is about widening inequality and our fight against it,” said Council Member Greg Casar, who authored the ordinance, according to the Austin American-Statesman.

Government employees are already granted sick leave in Austin, but some 37 percent of the city's residents (223,000 people) aren't given the option. For many, taking an unpaid day off to recover from a cold could derail a family living on a tight budget. For some, it could cost them their job. That means thousands end up going into work sick, a health risk for anyone they come in contact with that day (think wait staff at a restaurant sneezing on plates of food, or a cashier handing over germs on dollar bills).

“After tireless organizing and advocacy, our coalition has fought and won an ordinance alongside our allies on Austin City Council that ensures all workers have the right to take care of themselves or a loved one when they are ill,” said Jose P. Garza, director of the Workers Defense Project, in a statement. “Tonight, working families in Texas have made history.”

Many, including former state Senator (and Austinite) Wendy Davis, testified that the ordinance is also one of reproductive justice. Since women in Texas seeking an abortion are required to wait 24 hours between an initial “consultation” with a doctor and the actual procedure — and many live hours away from the nearest abortion clinic — taking unpaid time off to get the already pricey procedure is a major financial burden. Enough to keep women from getting an abortion who truly wanted one.

“Women will no longer be threatened with losing their jobs for accessing their reproductive rights,” said Davis Thursday evening.

The ordinance requires all private employers to provide up to 64 hours (the equivalent of eight eight-hour days) of paid sick leave to their staff annually. To lighten the burden on small businesses, members of council amended the rule to cap paid sick time to 48 hours (six days) for businesses with 15 or fewer employees.

The ordinance rejected a proposed exception for businesses with five or fewer employees. These tiny businesses, however, won't have to comply with the rule until October 2020.

According to U.S. Census data, 13 percent of San Antonians were employees by a form of government in 2016, meaning they were covered by paid sick leave. It's unknown what percent of the remaining private sector employees were granted this luxury.