Photo via Facebook, TexPopSA
Margaret Moser, 1954-2017
This story is reprinted with permission from the Austin Chronicle.

Coming two days after reports of her death spread virally on social media, the news marks the end of Moser’s four-year struggle with colon cancer. She died as a once-in-a-decade storm hit Texas.

Flash back to another rainy day five months back, when I was rummaging through a muddy South Austin salvage yard, foraging benches for my band van when a smashed up old Chevy called my name. Yanking open its rusty side doors, my eyes locked on a book, splayed open on the seat, revealing a face dear and familiar.

Of all books to find in a broken down van, it was Pamela Des Barres’ chronicling of famous groupies: Let’s Spend the Night Together. Miraculously, it was open to page 218, where Margaret Moser is pictured, smiling with a bouquet of flowers, between Woody Harrelson and Willie Nelson. Margaret always did have a way of finding interesting avenues into my life.

Cover image by Martha Grenon
The famed music journalist discovered me working at local bong palace Planet K in 2011 and quickly helped me realize my dream of becoming a writer. She believed in me when no one else did. I’m not alone, either. Her belief in people was a force of nature in Austin for more than 40 years.

Born in Chicago on May 16, 1954, to highly educated, churchgoing parents Phyllis Jackson Stegall and Willard Cummings Moser, Margaret was raised in New Orleans, Houston, and San Antonio, where she dropped out of high school. She moved to Austin in 1973 and began her journalism career in 1976 as an office manager and custodian at seminal alt-rag the Austin Sun. When the Chronicle was established in 1981, the ever-present backstage scenester seized the music news page with her column “In One Ear.”

“She had such a personal and passionate way of writing about music,” Roky Erickson, the godfather of psychedelic rock, who she held in reverence through his ups and downs, recently remembered. “I also liked seeing if she had written about me or my life or what I was doing. She had a different way of looking at things, and the way she wrote made the music come alive, like the musicians were right there with me. She has a gift not every writer has.”

Indeed, Moser boasted a unique voice as a writer: easy, soulful, and unabashedly reverent – part diary, part fanzine, part gossip columnist. At her best, like in this celebrated cover story of Charlie and Will Sexton, she was impossibly candid and personal. She used that voice to espouse love for music makers her entire career.

“She’s got the soul and the wonder and the gratitude of an artist,” offered Kathy Valentine, bassist and songwriter for the Go-Go’s during their heyday, in June. “She has that ability to know what’s important and what a musician needs, whether it’s a lift or recognition. People just want to be appreciated and recognized … Margaret has a way of doing that with every musician. She’s just the champion, our champion, all of us – all of us who play music.”

As Wagoneers leader Monte Warden noted in the Chronicle’s summer tribute, “Everybody thinks they’re Margaret Moser’s one special thing.” That supportive, confidence-boosting mentality she employed proved powerful and had an immeasurable impact on fostering the local music scene. If ever there were a patron saint of Austin musicians, it’s Margaret Moser.

Of course she wasn’t a saint in the holy sense. Chronicle co-founder Louis Black worried, in a late June “Page Two” column, that stories being shared about her in the twilight of her earthly existence were drifting so toward the positive, that it undermined the wondrous force of nature that was Moser.

“The good ship Margaret Moser is a fleet unto itself,” he mused. “She isn’t and has never been one person, one thing.”

Her well-documented groupie history, leading an infamous local welcoming committee called the Texas Blondes in the Seventies, included bedding Mick Ronson and Roger McGuinn – in one night. Margaret was wild.

“She always stirred up whatever trouble there was, and we all appreciated that because we were always looking for a good time,” Joe Ely recalled in the tribute.

Lucinda Williams, a close friend of Moser, concurs: “Margaret is so intelligent, well-read, funny as hell. She was always the life of the party. Unfortunately, the partying could get a little out of hand back then, you know. She was just this wild woman in the most brilliant way.
click to enlarge 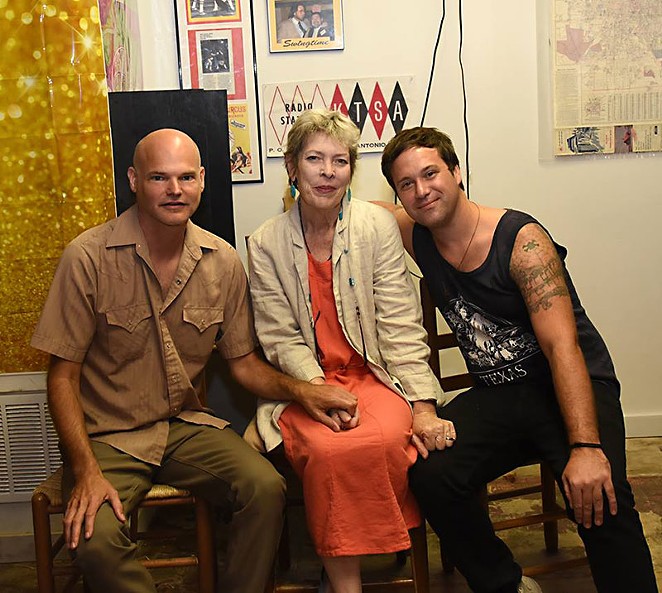 Paul Minor and Kevin Curtin (r) with Margaret at Tex Pop in San Antonio on June 11
“But she has this sweetness. There was a real soulfulness there, too. She’s always been one of the most favorite people I’ve ever known.”

The onetime backup singer/dancer in Dino Lee & the White Trash Revue, who was married for 15 years to famed tattoo artist Mike Malone (aka Rollo Banks), served a key community function as the life force behind the Austin Music Awards, the Chronicle’s 35-year-old homegrown version of the Grammys, a unique mash-up of performances from local acts and superstars such as Bruce Springsteen, Robert Plant, and Pete Townshend.

People often use the words “battle” and “bout” to describe their experience with cancer. Moser’s was neither. Rather, she entered into a slow and graceful dance with death.

Since May, when she let friends and fans know that the disease had moved to her brain and she was entering home hospice, Margaret was reciprocated the love she had shown Austin ten-fold. She and her husband Steve Chaney welcomed a constant succession of musicians, writers, and old friends down to San Antonio. She was also lauded extensively in the press, not just by the Chronicle, but NPR and the Austin American-Statesman. Few in the world get to experience living eulogies, but Margaret enjoyed a whole summer’s worth.

She’s survived by her mother, husband, and younger brothers Scott, Stephen, and Bill.

When we were emailing back and forth in June, Moser was truly basking in the attention. Though cancer consumed her, she wasn’t by any means miserable: “I keep saying my head lights up at night,” she wrote. “It does. The view is beautiful.”

There was another phrase she repeated often in her final months, more of a directive. It had everything to do with how Moser had entered the world of music writing as a high school dropout to eventually become the most celebrated female music journalist in Texas history. It was also significant to the way in which she transformed my life and many others:

“Keep opening those back doors.”