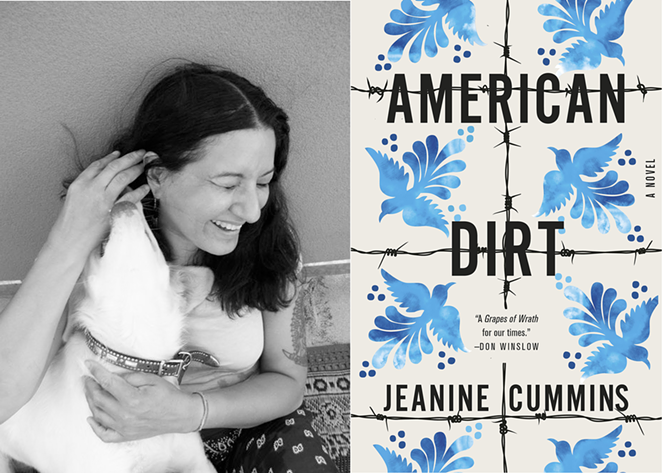 Ray Santisteban / Macmillan
Sandra Cisneros' people probably planned for this week's headlines to focus on her latest coup, the recently announced television adaptation of her novel The House on Mango Street.

Last week, Oprah named the novel American Dirt — a thriller in which a Mexican woman is targeted by a drug kingpin and must flee across the border with her son — an official selection for her book club.

The problem? The book is written by a white woman, Jeanine Cummins, who critics say leans heavily on racist stereotypes throughout the novel. Cue a bevy of scathing articles and conflicted think pieces, as well as a predictable shitstorm on Twitter.


writing my Latino novel: "We fled late in the night, or /la noche/ as Mami calls it. I'm always embarrassed when Mami says shit like that, but I forgive her because she's one of eleven kids and is from /el barrio./ Anyway it was late at night, and Yolanda Saldivar was chasing us-

The discovery that a promo party for the book in May featured barbed wire floral centerpieces that Cummins praised at the time certainly didn't help.

It didn't go unnoticed that Cisneros provided a glowing promotional blurb for the problematic novel.

“This book is not simply the great American novel; it's the great novel of las Americas. It's the great world novel! This is the international story of our times. Masterful," it reads.

As the controversy erupted, Cisneros remained silent. That is, until yesterday.

On Wednesday, Cisneros appeared on NPR's Latino USA as one of four people interviewed about the scandal, along with Cummins, author and outspoken critic of American Dirt Myriam Gurba and author Luis Alberto Urrea.

Unlike celebs such as Salma Hayek — who rescinded her initial endorsement of the book — Cisneros doubled down on her support for American Dirt.

In the interview, she strongly defended the novel, saying, "Reading this book ... it had great resonance for me, and I knew the amount of work that it took to weave this from testimonial and to make it into a novel that moves from the first page."

"I knew this story," she continued, "and I said, 'Ok, she has transformed it into a thriller novel.' And people are reading books like spy novels and other trash that you see at the airport. I thought, 'Great, now we’re going to engage someone who won’t come to a book written by Sandra Cisneros or by Reyna Grande.' She’s going to reach a different kind of audience, and we’re all together side by side working to raise consciousness about this issue. So I wanted to support it. I do support it, and I do stand by it."


What Cisneros says here, that she thought American Dirt might do good in the world because white audiences don't listen to Latinx writers... man. That's the same shit I've been told as a writer: your name will tank sales, baby. https://t.co/50jTxetgyL


Particularly rankled is Alisa Valdes-Rodriguez, the Cuban American author of bestselling novel The Dirty Girls Social Club. In a blog post entitled "Auntie Sandra's Cabin: Why No One Should Be Surprised Sandra Cisneros Endorsed American Dirt," she pulls no punches.

Her thesis? That "none alls y'all should be surprised that Sandra Cisneros endorsed American Dirt, the fake-ass immigrant novel written by a white lady ... from New York who magnanimously visited Mexico for a few days and then 'borrowed' anecdotes about Mexican migration from a bunch of actual Mexican or Mexican American writers who did not, as she did, get a seven-figure advance from a publisher for their efforts, presumably because publishing realizes 'them thar people' would only spend it on wrestling masks and guns anyway."

Among notable barbs, Valdes-Rodriguez deploys a few choice phrases she learned from her father: "ethnic entrepreneurs" and "comemierdas." For anyone unversed in vulgarity en español, the latter means "shit eaters."

"Their entire existence is predicated on not only the oversimplification of the 'exotic peoples' they purport to represent but about whom they actually know jack shit," Valdes-Rodriguez writes, "but also is dependent upon the continued marginalization and exoticization of said peoples, because without it them fakeass Aztec empresses would have no rebosos at all."

Anyone that's down for some serious chisme should read Valdes-Rodriguez's article in full — she has some big beef with Cisneros that's best gotten from the horse's mouth. While some could argue that said beef implies a bias on Valdes-Rodriguez's part, we have to admit that she makes some salient points in her takedown.