Erin Winch
Smoke and Water from Periphery
Francis Bogside // If it works for the Oscars. it works for us. Francis’s drinks menu didn’t offer anything new at the bar’s recent reopening, but a revised one should emerge before year’s end. A sampling of a couple of contenders yielded a sure winner, currently place-named the Sherry Cobbler. Some already know (and the rest are about to find out) that I’m normally not a fan of cobblers or other, crushed-ice drinks. They get too watery/wimpy for me. But this one, composed of Lustau Amontillado Sherry, Laphroig 10-year Scotch, house-made pineapple cordial, lemon juice, Angostura bitters and cinnamon — plus a nutmeg grating, holds up to the non-aqueous end. Nutty meets smoky with just enough fruit to moderate the two.

The Brooklynite // “It’s pretty much all his menu,” said the tatted female ‘tender who deftly stirred up my Buffalo Soldier at The Brooklynite. Bar manager Omar Cormier has indeed put together an impressive list, and though the BS was a more complicated drink than I normally go for, it turned out to be just my kid of tipple: boozy, just bitter enough, and creatively complex. Served over a single, pellucid cube, the mix of rye, Smith and Cross rum, house falernum mix, Gran Classico Italian bitter, cardamom tincture and Angostura bitters, all with an orange swath garnish, only got better with time. Not that a winner need be declared, but rum dominated the drink’s last whisper.

Juniper Tar // Benjamin Krick, Juniper Tar’s General Manager and recent winner of a Starchefs Rising Stars award, seems to delight in obscure spirits. He was the one to bring Blanche Armagnac to my attention, and with his nearly perfect Petra, a seductive blend of apricot rakia (clear brandy), ratafia (a fortified liqueur made from Champagne grapes) and Italicus (if staff tells you this rosolio liqueur is made in Greece from tree sap, just roll your eyes and Google it), he has conjured up a beautifully balanced gem. But Krick’s creative mind also goes to more mostly-mainstream spirits — just not produced in the normal way. The Tejuino con Elote combines Vago Elote Mezcal, fermented corn masa, and lime in a drink that’s good but not startlingly so on its own — but then he adds a garnish of torched baby corn anointed with a garlicky mayo. And the two are killer together — but separate. Don’t dip the corn in the drink, in other words.

Hanzo // The evil media would have us believe that we’re currently in an era of Gen-X recycling — both of things that birthed in the generation from about ’65-’85 and phenomena from gen-Xers’ teen years. Hence Star Wars’ new trilogy, the Will and Grace reboot and the newer, Stranger Things. If a drink I had at Hanzo is any indication, Cherry Coke (it officially debuted in ’85) is also coming back — at least that’s what I immediately thought of the Black Lodge, a cocktail dating back only to 2012. As riffed on at Hanzo, it includes rye, Cynar, Cherry Heering (no, not Herring), and vanilla infused Punt e Mes in lieu of the original Carpano Antica vermouth. It’s a beautifully executed, stirred drink, in which the vanilla first prevails, that shows more bitter Cynar with time — and that’s fine with me.

Esquire Tavern // It may be hard to divert your gaze from the battery of back-bar, back-lit bottles of mezcal at Esquire — but persist: these puppies are made for sipping, not stirring or shaking. Accordingly, there’s only one mezcal cocktail on the bar menu. Only one tequila, too. So the best course of action for the cocktail connoisseur is to look elsewhere, preferably to a drink you wouldn’t find at another bar in San Antonio. The First Note fills the bill perfectly. It’s built on a base of aguardiente de caña (small-batch rum from the mountains of Oaxaca — not at all like anise-heavy versions from Colombia) shaken vigorously with guava, Amaro Ramazotti, lime, and honey. The rum, funky with wild yeasts, dominates, but not to the detriment of the earthy guava and the restrained bitterness of the amaro. Think of it as a high-toned tiki without the orchids and umbrellas, if you like — but try it regardless. — RB

Jazz, TX // The Checkmate in Waterloo, a Cocktail created by Derik Cortez at Jazz, TX is a combination of house lavender-infused gin, capertif, dry vermouth and orange bitters garnished with a grapefruit knot. Featured on the summer menu at Jazz, TX this drink was the perfect combination of summer flavors for those that are into boozy drinks. More often than not, summer and spring menus are littered with refreshing cocktails that, while tasty, leave boozehounds longing for more. The Checkmate creates a summer sipper that utilizes local Texas flavors like the lavender and grapefruit. 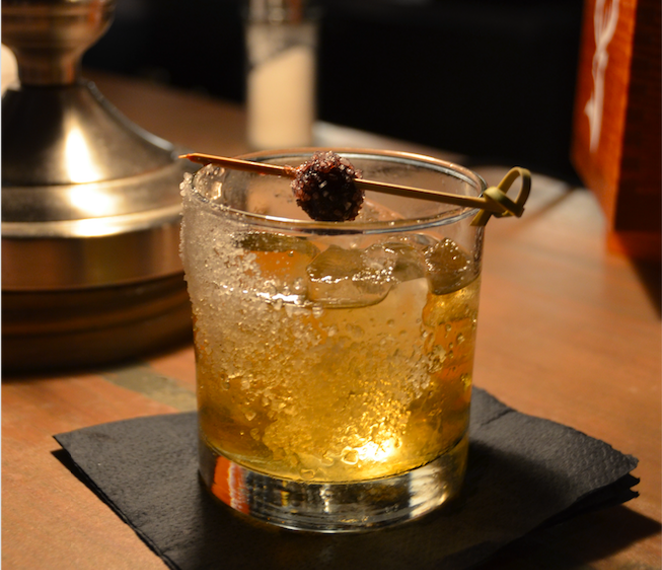 Jessica Elizarraras
What is Dead May Never Die from The Last Word
The Last Word // The What is Dead May Never Die was created by Stephanie Di Muria at the Last Word and it is a combination of Compass Box blended scotch, sweet vermouth, house-made habanero tincture and salt. The drink is fairly new to the 2017 cocktail list, but it's a star for sure. The cocktail derives its name from Game of Thrones, and is an amazing combination of peat, sweet and heat, that creates an amazingly well balanced and tasty cocktail. The salted rim and salt covered luxardo cherry really complete the drink though, leaving you sipping on a cocktail that tantalizes all of your taste buds.

Periphery // A limited time only cocktail that was a favorite was the Smoke and Water that was created by Michael Miller at the Periphery. Watermelon drinks have been popular this year, with many variations popping up all over the city, the Smoke and Water was a great combination that used mezcal, Campari, and a house-made watermelon shrub. The drink was almost a variation on the classic Negroni cocktail though in this variation, the bitter flavor of the Campari is enhanced by the smoke from the mezcal, which is then rounded out and balanced by sweetness from the favorite summer fruit. Due to its creative simplicity, and the use of favorite San Antonio ingredients, it’s a top cocktail of 2017 for sure. — EW

Nonna Osteria // Maybe I’m a sucker for a good show. Make sure to leave room for dessert at Nonna, be it the solid or liquid kind. The Marriochino Ubriaco, a combination of Nutella, espresso and China China — a herbaceous liqueur with a strong hint of citrus, that compliments the hazelnut spread and coffee — is finished off with a house-made green Chartreuse marshmallow that’s torched tableside. Give it a minute to cool or risk a scorched nose. — JE