Bad Takes: The Texas Lottery is a losing proposition for ticket buyers — and for the state's schools 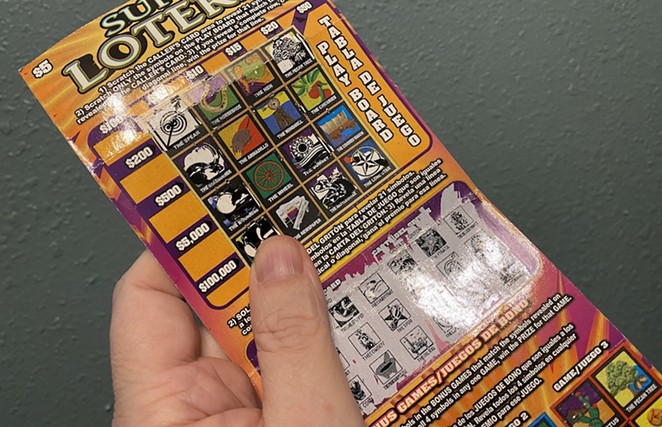 Sanford Nowlin
The odds are against any lottery ticket earning money for the buyer. That's kinda how lotteries work.
Bad Takes is a periodic column of opinion and political analysis.

"Hey, you ever get a lottery ticket as a gift? That's what I got for Christmas, guy gave me a lottery ticket. And what a stinking gift that is. What the hell is the guy thinking?" Macdonald said. "'Here you go... NOTHING! Best of the season to you there, it's... NOTHING!'"

Well, to a degree.

Earlier this month, one San Antonio resident won $3 million from a $50 scratch-off purchased at the aptly named Lucky Store on Commercial Avenue. That's not nothing.

Ticket sales also hit a record $8 billion this year, according to the Texas Lottery Commission. That's certainly not nothing either. As the Commission reminds us, since Gov. Ann Richards bought the first lotto in 1992, it's raised more than $27 billion for education and more than $100 million to help veterans.

But have K-12 students actually benefited from this massive windfall? Not especially. Despite those brisk scratch-off sales, Texas ranks 43rd in education spending, and it's fallen far short of the national average for decades.

And unlike our budget-strapped Southern cohorts in Louisiana and Tennessee, Texas can't claim lower-than-average fiscal capacity as an excuse for not investing more in its kids. We've got the money, we'd just rather blow it on locking up migrants and corporate welfare.

Another riddle to stuff your stocking with this holiday season: instead of state-sponsored gambling, why not legalize and license casinos, then tax the bejesus out of them to fund necessary government functions? Why can't I play one goddamn hand of Texas Hold 'Em in the goddamn state of goddamn Texas?

Deciding to step into a poker room is one thing, but to normalize laying bad bets while buying gas at the convenience store is something else. Practically every state has a lottery these days, yet plenty of Americans continue to struggle with compulsive gambling. Why does the media routinely report big winners without saying peep about the everyday fleecing of those of limited means who wager against stupendously long odds every time they buy a ticket?

Our lucky San Antonian, for example, beat worse than 2.5 million-to-1 odds this month. But for every instant millionaire, there are millions of Texans pouring cash they don't have down the drain and rationalizing it by saying, "It's for the kids." What's next? State-run strip clubs to subsidize hospitals?

However we reconcile ourselves, in the end, Norm was right. You shouldn't give someone a lottery ticket as a gift. That goes for your loved ones on Christmas Eve. And also for returning soldiers and impoverished schoolchildren who deserve something more substantial — like a sure thing.