Barney Does Biggie: The Purple Dinosaur Sings Two Notorious B.I.G. Classics and It Is Awesome 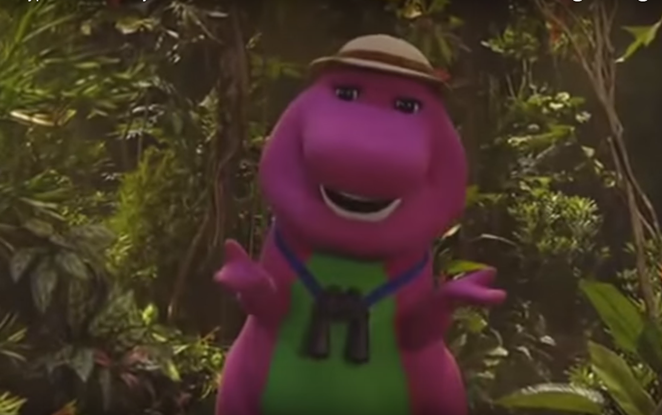 Many of us born before 9/11 and after the Chernobyl disaster can easily recall watching a dinosaur named Barney sing and dance for our childish amusement. We learned many things from this big purple bastard: Not to steal from others, always listen to your parents and, most importantly, how to make C-notes by the layers (like true fucking players). OK, so maybe not that last part. However, with a little fancy editing, the plum Tyrannosaurus is now representing the 'B' in Notorious B.I.G.

In the video for "Get Money," we see a child playing with a lifeless Barney toy and just as the gangsta-licious beat drops, Barney springs to life, inspired by the "You Can't Turn Me Away" sample, no doubt. The dino and friends do some pretty fly choreography as Barney spits the late, great Biggie's bars. PBS' very own Junior M.A.F.I.A. – Baby Bop, BJ and friends – hold down the chorus chant of "Fuck Bitches! Get Money!"


Would you believe that this is not the only Barney-does-Biggie video out there?
Luckily, B.I.G.'s "Big Poppa" was also taken on by bored YouTubers with far too much time on their hands.

As the gangsta-ass song starts, we see Barney turn towards the camera to drop drop the famous "Uhh" of the song. And just like Christopher Wallace's love for fine clothing, we are treated to Barney in a top hat, bow tie and some pimp-ass kicks, teaching the children a thing or two about cutting a rug.

Like any rap video worth its salt, there's got to be a beach scene and this one is no exception. Much like the Locs favored by B.I.G., Barney rocks some blacked-out wayfarers, perfect for blocking out the sun on a day after too much Dom. He then jumps and twirls like a ballerina before lighting up the mic, spitting fire. B.J. takes Puff Daddy's part, imitating Diddy's goofy-ass comments and laughter perfectly. The better of the two videos, "Big Poppa" also features Barney changing costumes several times and going up ... in a hot air balloon. Even Yeezy doesn't roll in a motherfucking hot air ballon! Shit is too tight.