Jaime Monzon
Behemoth's Nergal delivers his venom.
Extreme metal isn't everyone's taste.
But for those who find catharsis in pummeling songs of rage, terror despair, Tuesday's Behemoth-led bill at the Aztec Theatre showed just how creative metal can be when divorced from mainstream commercial concerns.

Wolves in the Throne Room, the Olympia, Wash.-based opener, kicked off the proceedings eerie atmosphere. Although the band took early influence from Scandinavian black metal, it's since evolved a soundtrack-like approach to the genre. The lengthy, multi-layered compositions start with foreboding instrumental swells before peaking into violent crescendos of tremolo-picked guitars and shrieked vocals.
click to enlarge

Sanford Nowlin
Wolves in the Throne Room look into the light.


Augmented by a keyboardist who coaxed sounds of thunderstorms and crackling fire from her instruments, the band wove its ten-minute closer "Born from the Serpent's Eye" into a desolate-but-beautiful tapestry of sound. When are the producers of Game of Thrones going to wise up and have these guys score an episode?

At the Gates took the stage next, and their drummer's Motorhead shirt provided a solid tipoff where tempos would hover for most of the performance. In contrast to the experimental opener, the veteran Swedish outfit delivered its goods in concise, speedy blasts. Unlike an army of soundalike thrashers, At the Gates have a penchant for hooks and sing-along choruses that kept its set from blurring together into a generic mess.

Baseball cap-wearing vocalist Tomas Lindberg was the perfect master of ceremonies, darting across the stage, pumping fists and egging on the crowd. As the only band of the night that didn't arise from the black metal scene, At the Gates proved an unpretentious and energetic foil for the other acts' darker, more theatrical approach.

And "theatrical" certainly fits headliner Behemoth precisely. The Polish band donned the cadaverous corpse paint worn the by black metal genre's Scandinavian pioneers. And they were unafraid to bring out a little showbiz:

Jaime Monzon
At the Gates goad the audience into a frenzy.
With all the over-the-top blasphemy, things could have taken a quick right turn into Cartoon Land (or Marilyn Manson-, for that matter) if the nearly three-decades-old outfit didn't have the musical heft to back it up. Fortunately, they stormed through a highly orchestrated 14-song set that fused black and death metal (that's "blackened death" to those in the know) with apocalyptic fury.

Clearly, Behemoth's time touring with heavies like Slayer and Dimmu Borgir have required it to hone its game. Singer-guitarist Nergal stalked the stage, first in a black skull mask, then a black parody of a papal . He periodically climbed the stadium-like risers or leaned over the monitors to incite the audience, who responded with raised fists and devil horns.

In the end, the bill was a testament to the power of a well-constructed package tour — none of the bands sounded like carbon copies of each other but all were united by a desire to push metal to its sonic extremes. If one act didn't serve up your particular cup of arsenic, there were still two other deadly brews to sample. 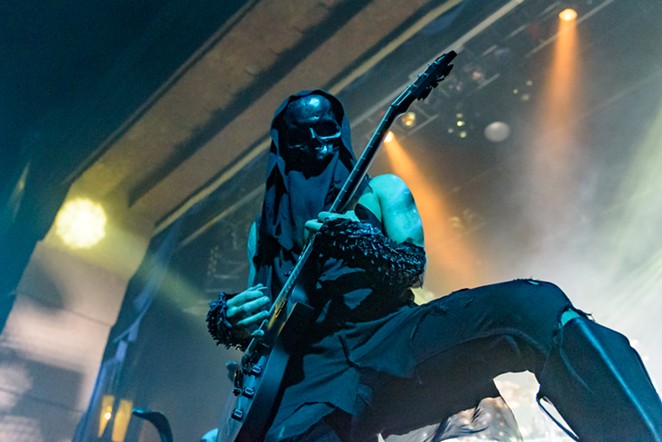