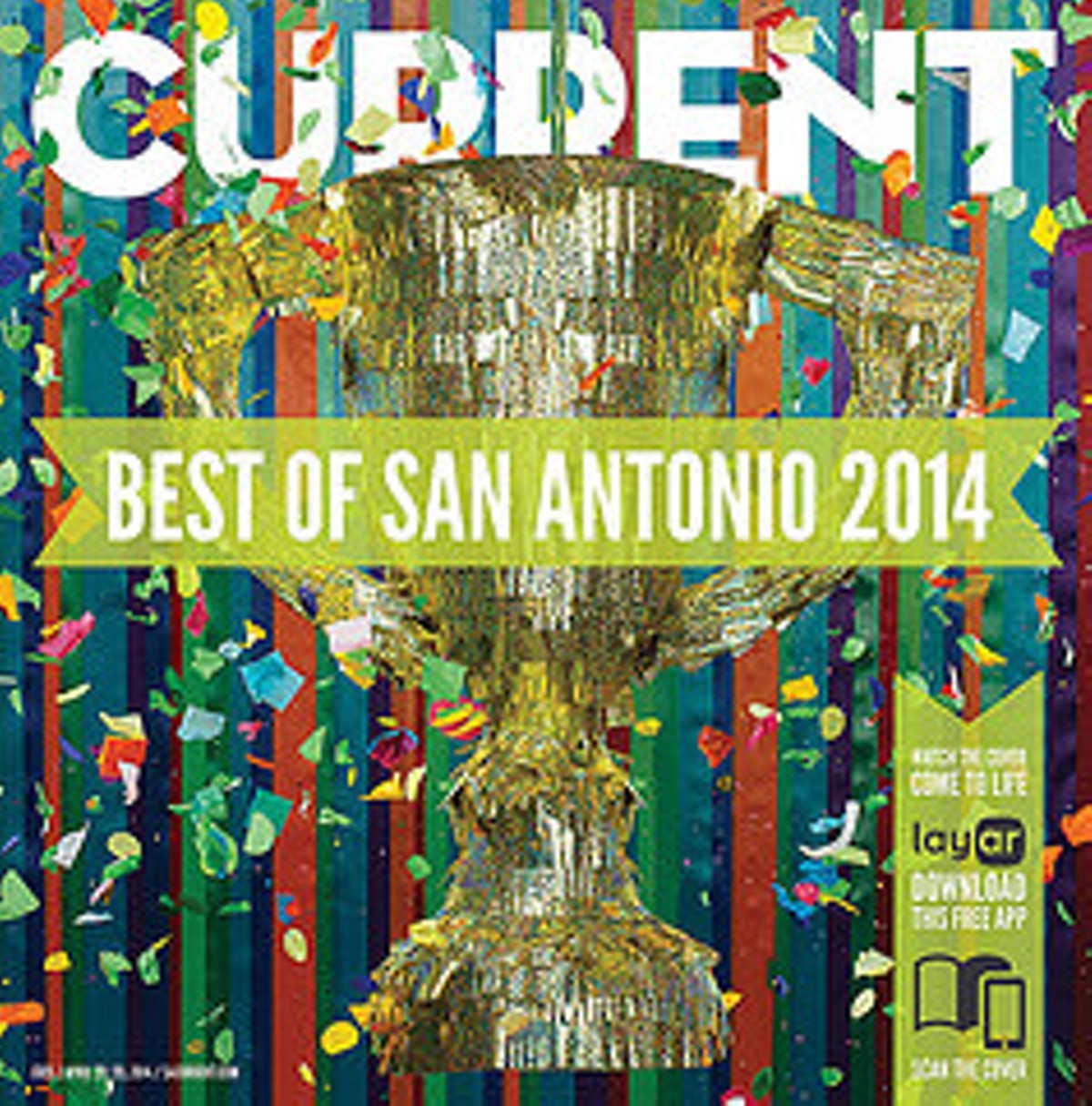 He rarely gives himself marquee billing on the many solo and group exhibitions he puts together every year, but Hills Snyder gets our vote for San Antonio’s best curator. Snyder is the guiding force behind the consistently unique offerings at Sala Diaz, one of SA’s premier contemporary project spaces. He encourages resident solo artists to overtake the unconventional facility at the limits of their imaginations, which has made for some of the most ambitious and original work in town. For group shows, Snyder addresses uncommon but accessible conceptual themes with customary wit; his “Lonely Are the Brave” Contemporary Art Month show at Blue Star five years ago, inspired in part by the 1962 Western film of the same name, set the bar high for SA, and he doesn’t let up.

Choosing best chef during SA’s gastro-renaissance is basically the culinary version of Sophie’s Choice. Not only do these two chefs exemplify a passion for food in all its forms, both are adding an extra element to the growth of the food scene locally and nationally. Rattray’s hand in bringing in Josh Ozerky’s carnivorous carnival (aka Meatopia) to the Pearl notwithstanding, chef’s collaborative dinners with his renowned peers help bring inventive eats to San Antonio. For his part, Bowers, who will participate in this year’s Austin Food & Wine Festival, is keeping things in the family with his guest chef series that helps showcase local talent including Jennifer Dobbertin (Hot Joy), Robbie Nowlin (Las Canarias), Jeff Wiley (NAO) and Pieter Sypesteyn (Where Y’at). Both chefs deserve a lot of credit for moving our tasty food scene forward.

In a city with an art scene as inclusive as San Antonio’s, maybe it’s counterintuitive to single out one person as worthy of this title. Plus, what’s a maven, exactly? Well, Nina Hassele is a damn good example. The Brooklyn native and passionate San Antonio convert is co-chair of Contemporary Art Month, for starters, and instrumental in organizing the horde of events, calendar entries, venues, volunteers, patrons and celebrations during SA’s annual month-long extravaganza. Her meticulously maintained Facebook feed is more informative and diverse than the arts sections of some major publications. She’s a tireless, unpaid, year-round promoter of exhibitions and performances, Kickstarter campaigns, art spaces, theater events and live music. She’s relentlessly cheerful, too.

Elequa is a water purifying startup company that utilizes electrocoagulation, a simple, inexpensive, chemical-free process that kills bacteria and separates other water contaminants using an electric current. Beltrán, a go-getter who’s dabbled in photography, film, travel and activist causes like Occupy Wall Street, co-founded Elequa and is now working to bring affordable and clean water to families in Mexico.

Jack-of-all-trades Tim Jenison founded NewTek in 1986, which led to the development of many successful desktop video production and manipulation software. His most recent cinematic foray, the recently released Tim’s Vermeer, documented his painstaking process of recreating Johannes Vermeer’s The Music Lesson by using lenses, mirrors and a camera obscura in an attempt to prove Vermeer and his contemporaries may have used such technology to acheive their revered style.

Impressing us here at our humble-sized alt-weekly are a few stand-out reporters at the SA daily: Josh Baugh, who gets all up in City Hall’s face; columnist Gilbert Garcia, who refused to overlook former councilman David Medina’s multiple failings; columnist Brian Chasnoff, who famously first reported on Elisa Chan’s homophobic remarks; and straight-out-of college hotshot Kolten Parker—who we’re convinced is actually six people considering how many articles and blog posts he churns out. Keep filin’ those FOIAs, digging through campaign finance records and staying on top of your beats, journos.

Ask serious, local food folk which restaurants have the best overall service and these names consistently appear: Bliss, Boudro’s and Chez Vatel Bistro. Also touted, and getting the nod for sheer longevity of its core staff, is Biga on the Banks; some of the servers and managers have even been there since the original location on Locust Street. It’s difficult to mention all, but here are some on the management side: Jon Baumgartner, Michael de la Vega and Missy Ramos. On the floor: Chris Sanders, Gigi Gallegos, Ben Vargas and Cesar Martinez. And behind the bar, Bronson Ketchum and Kim Woods. Many diners ask for favorites by name; one group was even inspired to write a poem, massively excerpted below:
“Ode to Biga”
… Your hostess greeted us kindly
Your chef’s menu was divine
And it’s hard to say what we loved more
Our server, Chris, or the wine! ...

But, upon further review, this pick goes to every Spurs fan in Bexar County who endured the heartbreaking Game 6 and tortuous Game 7 of the Spurs vs. Heat finals in real time last year. Bring on the playoffs!

“If he ever quit dressing up, I might go home and cry,” fellow best-dressed winner Polly Lou Livingston told the Current about her longtime pal Mike Casey and his distinctive sense of style. A practicing attorney who rides a one-speed bicycle as his primary source of transportation, Casey has been called many (good) things—dandy, urban pioneer and unofficial Mayor of Southtown. So frequently is Casey seen in a vintage suit, straw hat and bowtie that some folks don’t even recognize him when he’s dressed casually. This adorable uniform has a backstory. When his dear friend Bernard Lifshutz (who co-founded Blue Star Arts Complex in the mid-1980s) passed away, Casey inherited about 20 of his suits. “In the fall and winter, most of the dress-up things [are] hand-me-downs from Bernard,” Casey told the Current. Even the famous hat has a story. As a founding member of the King William Yacht Club—which has been launching canoes in the San Antonio River every Fourth of July for the last 30 years—Casey purchased a Venetian straw boater hat from Paris Hatters. “It’s got some miles on it,” he said. “But so have I.”

Although she claims she’s been playing dress up since before she was born, it’s safe to say Victoria native Polly Lou Livingston’s keen fashion sense developed in her father’s bygone department store, M.O. Simon. Growing up around clothes led to Livingston working as a buyer for the store, taking trips to New York to meet with designers and later working in San Antonio as a personal shopper for Frost Brothers, where she earned a nickel on the dollar (“If they spent $500, I got 500 nickels,” Livingston told the Current). Comprised of garments dating back as far as the 1940s, Livingston’s truly eclectic wardrobe—which takes up almost an entire room—seems to have a mind of its own. Take this chestnut for example: “Clothes have personalities. The outfit tells me what it wants at a particular time ... and I do what it says.” Livingston, who voices a yellow-green pygmy elephant named Tree Trunks on the Cartoon Network series Adventure Time, even dreams about clothes and trends. “I seem to know what’s coming up,” she said. “Black and white is back—even for summer. Black and white and gray ... maybe a touch of another color. ... But never wear white shoes after August.”

Seemingly always on the scene, blogger and activist Randy Bear makes us think twice about major City of San Antonio developments with his critical insight and natural curiosity. He’s an old school citizen—asking tough questions, attending mundane council meetings and hearings on nitty gritty policy—guided by his evident passion to make San Antonio the best it can be. Leslie Knope would be proud.