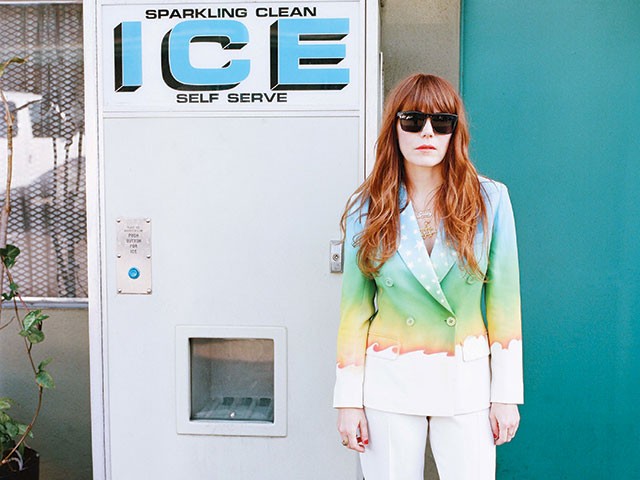 Jenny Lewis was 23 years old when her influential indie rock group Rilo Kiley released their first EP in ’99, the quirky and uneven, but ultimately promising Initial Friend. With its confessional, wry lyrics and insular, lo-fi bedroom aesthetic, Friend hit home for fans of growingly popular indie acts like Death Cab for Cutie and Bright Eyes. Over the course of their next two albums, Take Offs and Landings and The Execution of All Things, Lewis and company solidified their status as a bona fide indie rock phenomenon. This week, with Rilo Kiley fading into the rearview, Lewis comes through Gruene Hall supporting her excellent third solo LP The Voyager. Knowing that where she is now has a great deal to do with where she’s been, let’s take a quick look at Lewis’ songwriting progression.

“Hail to Whatever You’ve Found...”
A track from Rilo Kiley’s magnum opus, 2002’s The Execution of All Things, “Hail to Whatever You’ve Found in the Sunlight that Surrounds You” is entirely indicative of what Lewis did best with the LA quintet. There’s a sublime tension in this song, as with much of Rilo Kiley’s material, between the personal and the universal. At once a self-help meditation and a grand exhortation to loving acceptance, “Hail” is as emotive as it is philosophical. At a time when her friend and Bright Eyes’ ringleader Conor Oberst was touted as the voice of his generation, Lewis’ work was probably more wholly deserving of that type of praise.

“The Big Guns”
With rumors of the dissolution of Rilo Kiley already abounding, Lewis released her first solo LP Rabbit Fur Coat in 2006. The album, far more steeped in alt-country and folk traditions than 2007’s Under the Blacklight would be, was a lyrical tour de force, addressing issues as compelling and disparate as atheism, poverty and consumerism, familial rot and an ultimate hope for happiness. The only Jenny Lewis album of its kind, Rabbit, with songs like the searing “The Big Guns”—which lambasts the patriarchy and the patriarchal conception of God—reminded us of the incredible depth and range of Lewis’ talent.

“Just One of the Guys”
After a dud in the form of 2008’s Acid Tongue, Lewis returned this year with a new look, a matured creative approach and a fantastic new album in The Voyager. Produced by Ryan Adams, The Voyager finds Lewis once again playing her voice of the generation role. Only now, that generation has aged. Lewis’ chief concerns on this album center around the expectations, disappointments and excruciating losses that accompany growing older. On the album’s first single “Just One of the Guys,” Lewis contemplates how she might fit into this male-dominated world, even as she eschews many of its typical expectations.