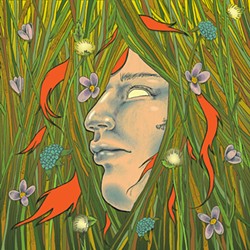 If you've never heard of local, late-blooming singer, songwriter and guitarist Douglas Miles Clarke, it's high time to amend that.

As a Canuck youngster in the '70s and early '80s, he played in bands and honed his skills before more pragmatic concerns — college, an MBA from Pepperdine and a career in finance — relegated his musical entanglements to avid fandom and home-bound dabbling.

After moving to San Antonio, Clarke slowly began trying his hand at songwriting, something he never saw as a personal talent, until — randomly enough — his belated discovery of indie-folk rocker Ryan Adams. In a phone interview last week, Clarke told the San Antonio Current that "The way [Adams] writes songs, gave [him] a framework and a spark for a kind of songwriting [he] thought [he] could be good at."

After frequenting area open mics and songwriting workshops, Clarke's burgeoning confidence led him to work on his first home-recorded material. Around this same time, as he taught himself the ins-and-outs of recording, producing, mixing and mastering, Clarke worked with local acts like Chris Maddin's FILMSTRIPS and Nat'l Parks on releases.

In 2013 and 2014 respectively, Clarke released his first recordings, L(G) and HOMEWRKD: Alaskan Night Tremors. The latter was written entirely as part of a weekly songwriting group, with members encouraged to write a song based off of a weekly phrase.

Both of these efforts, plying a poppy brand of Americana, contain some strong compositions and show immense promise. His latest work, Intransigence, out digitally and on vinyl this week, marks his true arrival as a force in local music.

"These are the first songs that are really where I want to be musically," said Clarke, 55.

Breezy and satisfyingly knotty all at once, Intransigence is an album of artfully-rendered alt-pop-rock songs that confront neuroses, lament disenfranchisement, and generally run the gamut of human emotion.

The album, a rewarding set of 10 songs, manages to feel classic and contemporary at the same time. Clarke explained that this is likely due to the fact that he "stayed current and stayed with music through all of its movements."

He continued: "So when I started writing, I knew what had been happening in music over the years."

With Intransigence, Clarke makes a statement of startling vitality and lofty ambition brought to unlikely fruition.

Get Intransigence at douglasmilesclarke.bandcamp.com and be on the look out for its companion album Oh California in October.