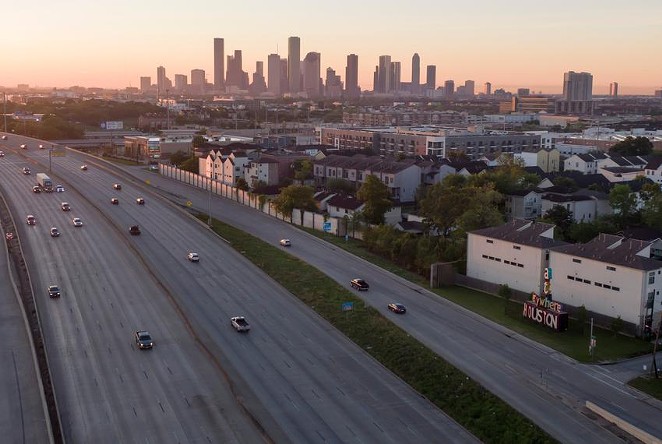 Texas Tribune
An aerial view of a highway in Houston on April 1, 2020.
The White House estimates that Texas will receive about $35.44 billion over five years for roads, bridges, pipes, ports, broadband access and other projects after federal lawmakers passed a long-anticipated national infrastructure bill on Friday.

The influx of capital is set to advance existing transit plans, pay for much-needed repairs and could lay the groundwork toward increasing transportation options for Texans.

U.S. House lawmakers gave the roughly $1.2 trillion measure final approval late Friday after a series of negotiations and concessions to get the bill passed. President Joe Biden is expected to sign the bill into law soon.

“The need for action in Texas is clear,” a White House fact sheet read. “For decades, infrastructure in Texas has suffered from a systemic lack of investment.”

The funds expected to come to Texas were determined by the White House through the bill’s state allotment formula. Texas will also have the opportunity to apply for grants in a variety of categories in addition to these funds.

It’s unclear how the money will be spent or what projects it will fund at this point, but the dollars will be set aside for a variety of new and maintenance projects, from highway expansions and broadband access to modernizing public transit throughout the state.

Here is the breakdown of the funds that Texas is expected to receive based on estimates from the White House:

The White House also estimated that $3.5 billion will be invested to weatherize the country’s energy infrastructure, but it wasn’t immediately clear how much of that money would go to Texas or how those plans could combine with measures approved by the Texas Legislature this year in response to February’s devastating winter storm.

U.S. Rep. Lizzie Pannill Fletcher, D-Houston, said the massive spending bill will help revitalize projects across the state and jumpstart new ones — as well as stimulate the state’s economy, which is still recovering from the COVID-19 pandemic.

“One of the really important things about this bill is that it's gonna help spur economic investment. [Infrastructure is] a huge driver here in Texas,” Fletcher said. “We know that we need to invest in our infrastructure and so it's really going to help us complete a lot of or begin a lot of projects that we know we need.”

Fletcher said the bill will boost weatherization and storm management throughout the state with funds planned for U.S. Army Corps of Engineer projects and will likely help boost port infrastructure in Houston.

“This comprehensive bill is just a giant step in moving forward,” she said.

The Texas Department of Transportation is waiting to see how the federal funds will be divvied up for initiatives throughout the state.

"The infrastructure bill passed by Congress will help address transportation needs in Texas,” TxDOT communications director Bob Kaufman said in a statement. “While we do not specifically know which projects will get the additional funding yet, it's likely we could move forward projects already in various phases of development in our ten-year planning document. ... With our state’s population booming, funding for transportation is as vital as ever.”

Kaufman referenced the department’s Unified Transportation Program, a document that began in 2015 outlining priorities over the next decade. The plan includes hundreds of projects across the state, including highway repairs and improvements and additions to public transit.

All Texas lawmakers voted along party lines — with the majority of Democrats voting for the bill and most Republicans voting against it. The road to passage was fraught with intraparty debate among Democrats, with some opposing it in an attempt to get leverage for a more socially progressive bill. All but 13 Republicans in the U.S. House pushed back on the proposal, largely saying it was bloated and dedicated funds to unnecessary priorities.

“We support roads and bridges, we don’t support roads and taxes and spending that really drive down this economy,” U.S. Rep. Kevin Brady, R-The Woodlands, told The National Desk. “I think most of us felt two things. Most of it was wasteful spending on Green New Deal issues but more importantly in the House it’s linked to the tax hikes and the spending hikes which is so dangerous, I think, to our country.”

Chandra Bhat, a University of Texas civil engineering professor and director of the U.S. Department of Transportation’s Center on Data-Supported Transportation Operations and Planning, said the allocations are a good step toward improving transportation in the state. But he’s not sure it’s enough.

“If you're asking me if $27 billion is sufficient for roadway transportation — it's good. I wouldn't say it's fantastic,” he said. “But for public transportation that’s where I think it’s way short for what we might need to go with the population booming the way it’s been.”

All of Texas’ largest metropolitan areas are growing very fast, leading to record amounts of congestion, Bhat said. He pointed to projects like Project Connect in Austin and MetroNext in Houston as examples of the types of initiatives that should receive increased investment.

Bhat said Texas is “very highway-oriented” and should continue to invest in roads. But he said the future needs to be a multimodal transportation system, and he thinks it will take more than the estimated $3.3 billion coming from the bill to diversify the way Texans get around.

“I think anyone in the transportation field will agree that we simply cannot continue building ourselves out of traffic congestion. It is simply not possible by building more and more roads,” Bhat said. “We don't have the real estate. We don't have the financial wherewithal. There has to be other means of trying to address how to move people reliably and efficiently.”

Houston Mayor Sylvester Turner said his city — and others throughout the state — will immediately reap rewards from this investment into infrastructure once funds are earmarked for specific projects.

“There are a number of areas within the city of Houston that can directly and specifically benefit,” he said. “We have projects that are ready to go to shovel ready right now. So it couldn’t have passed a moment too soon.”

In addition to the need for maintenance for roads and bridges, Turner said there is room for innovation and safeguarding against future problems with the incoming funds.

He also emphasized the importance of investment into Texas’ electrical grid, nodding to the fact that his constituents are seeking more stability following the widespread outages during February’s winter storm.

“When it comes to infrastructure, there's a critical need of resources, from wastewater treatment facilities, roads, bridges, the port, transit and in so many different areas,” Turner said. “It's a big deal. It certainly will help people in our respective cities throughout the state of Texas and throughout this country. And I think it will have a transformational impact.”

In addition to the $100 million provided under the infrastructure bill to expand broadband service, low-income grants will be offered to around 29% of Texans to help them pay for the internet access, the White House said.

Greg Conte, Texas Broadband Development Office director, said his office is looking into how the funds will be used to help bring “reliable, high-speed internet to every corner of Texas.”

“Once we determine how these federal dollars can be used, they will add to the significant $500 million investment the Texas Legislature made in broadband earlier this year,” Conte said.

Bethany Irvine and Kalley Huang contributed to this article.