Kent Rush
Influential artisan Dionicio Rodríguez created this trabajo rústico palapa for a private residence in Boerne.
A counterbalance to the geometric austerity of formal English garden design, the artisanal practice of trabajo rústico uses common construction materials — chiefly cement and rebar — to mimic trees, rocks and other wonders of the natural world.

Fitting for the artistic illusions it creates, one could say the form developed organically. What’s more, San Antonio played a significant role in its growth — as evidenced by works such as the distinctive trabajo rústico footbridge in Brackenridge Park, among other local landmarks.

A new coffee table book published by Texas A&M Press, Artisans of Trabajo Rústico: The Legacy of Dionicio Rodríguez, highlights the legacy and influence of the artisan who brought the form to the Alamo City.

The marriage of trabajo rústico’s materials first came into focus at the 1867 Paris Exposition, where French gardener Joseph Monier made a splash with weather-resistant “ferro-cement” flowerpots. His creations were facilitated by the invention of portland cement and the advent of inexpensive, mass-produced steel in the mid-19th century.

As trends do, France’s faux bois movement spread, first to Italy and Spain — modernist architect Antoni Gaudí was a notable fan — and then to Argentina and Mexico. And eventually Texas. 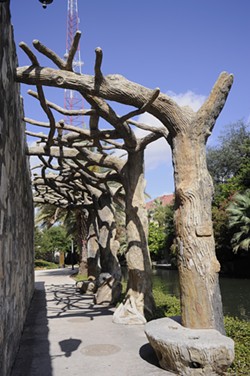 A native of Toluca, Mexico, Dionicio Rodríguez worked alongside his father as a brick maker in Mexico City and most likely learned to fabricate in the trabajo rústico style from Luis Robles Gil, an artisan who trained in Spain.

After creating numerous concrete sculptures in Mexico, Rodríguez immigrated to San Antonio in 1924 and began working for Dr. Aureliano Urrutia — a surgeon who designed his private sculpture garden Miraflores in homage to the “floating gardens” of Mexico City’s Xochimilco.

Through his work at Miraflores — a Texas Historic Landmark adjacent to Brackenridge Park — Rodríguez began receiving public and private commissions to create trabajo rústico pieces across Texas and in seven other states.

Beyond his exacting work — which can be seen in Brackenridge Park, Memorial Park Cemetery in Memphis and even an Arkansas mill that appears in the opening credits of Gone with the Wind — Rodríguez’s influence extends impressively through the network of assistants and protégées he trained.

“When I first discovered Dionicio’s work about 20 years ago, it was like opening a door to a light-filled cavern,” author, artist and historian Patsy Pittman Light said.

“When I first came to San Antonio to start the print program at the San Antonio Art Institute, I began to notice these trabajo rústico pieces in town,” Rush recalled. “I have always been a fan of vernacular art — yard art, car art, roadside attractions — and I was intrigued with these odd pieces that looked like wood but were made of concrete. I had no idea what it was, nor did I know that it had a history as a traditional genre. … I was thrilled to see that Patsy had written a book about this work and learned a lot from reading it.”

Kent Rush
A Monterrey native who immigrated to San Antonio in 1919, sculptor Bacilio Aguilar completed many trabajo rústico commissions, including this unique gas pump shelter.
Bringing a genre into focus

In addition to bonding over their interest in the niche, the pair teamed up to co-curate “The Tradition of Trabajo Rústico: Fantasies in Cement,” a 2010 exhibition hosted by the Southwest School of Art and sponsored by the San Antonio Conservation Society.

“While working with Patsy, it came to my attention that she had a lot of information on the other artisans that Rodríguez trained as apprentices and who later went off on their own and started their own independent practices,” Rush said. “I proposed to Patsy that we work together to make a book about these other artisans.”

Through Light’s voice and Rush’s images, the genre comes clearly into focus with a
click to enlarge Kent Rush
A native Texan who worked for Southern Cement Company before assisting Rodríguez in the 1920s and ‘30s, artisan Sam Murray applied trabajo rústico techniques to critters spanning from donkeys and deer to flamingoes and monkeys.
strong concentration on San Antonio — home to what Light sums up as “the largest number of trabajo rústico works found in any city in the United States.”

Following chapters dedicated to background, history, preservation and the fabrication of trabajo rústico — where Rush steps in as author and tackles everything from armature and joinery to surface modeling and coloration — the coffee table book breaks out into profiles of 20 early and contemporary artisans.

On these pages, Rush’s photographs illustrate the organic nuances of trabajo rústico and the local legacy of Rodríguez, whose work is so realistic that it’s often mistaken for the real thing.