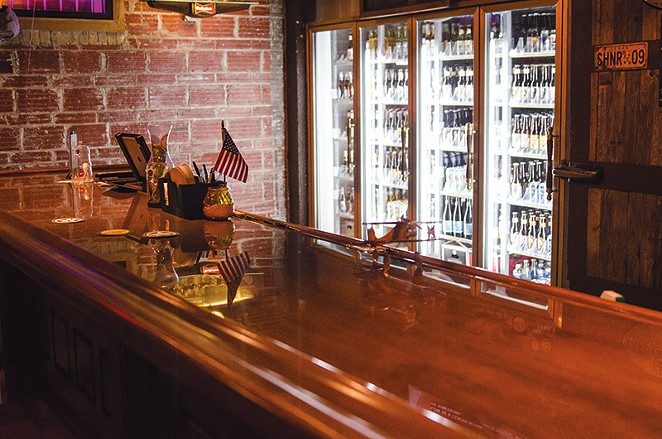 Jaime Monzon
The beer selection will fit both newbie and seasoned beer lovers.

Built into the structure of an old barn that's housed a century of tenants, from the four-footed to the two-steppin' variety, The Beer Depot is extending the existence of fine beer establishments a little further into San Antonio's West Side.

In operation for a little over two years, it's the latest venture of veteran restaurateur Steven Rodriguez. Like his father and his father's father before him, he owns and operates a restaurant — the Piedras Negras De Noche, which shares a parking lot with Beer Depot on the 1300 block of South San Pedro. Unlike them, he's also opened up a watering hole that pairs everything San Antonio loves about its finest dives with a beer menu that could — and should— draw suds nerds from all over.

Rodriguez was behind the bar when a friend and I rolled in on a mercifully low-temperature Friday evening a few weeks ago. I had obliterated a bacon-laden grilled cheese and shovelful of fries at The Monterey not 30 minutes before and was, to put it mildly, carbo-loaded. My compadre had been at work since 7 a.m. and was reeling slightly from the bottle of Jester King Dichotomous we'd split at the Monty. It was definitely time to take things easy.

Rodriguez greeted us warmly and handed over a pair of beer menus. With over a hundred different brews available, it's more extensive than your average ice house, stacked with San Anto staples (Freetail, Branchline) and state breweries (Saint Arnold's, Karbach). There's also fridge space set apart for the macro staples that continue to draw patrons who were regulars here during Beer Depot's past life as a Tejano bar.

With slight sheepishness in his voice, my friend asked for a can of PBR; intrepid beer correspondent that I am, I opted for Freetail's sour summer sensation, Yo So Un Berlinerweiss. The price was right for our wildly divergent choices. My friend's can of well branded swill cost $2; my Saytown Berlinerweiss was just about twice as much.

As befits a former barn, Beer Depot is one single space, filled with several tables in addition to the bar, which comfortably seats about 10. There's no A/C, so the Herculean (if not Sisyphean) task of keeping patrons cool falls to a legion of 10 ceiling fans and one colossal turbine to the right of the TV. Happily, on a night cooled by recent rain and a breeze, it felt great.

The Beer Depot has done due diligence to keep things friendly on its edge of the freeway. There are several billiard tables available for both seasoned and aspiring pool sharks to sharpen their nine-ball game. A reliably gigantic flat-screen TV projected the only non-Spurs sporting event I've seen in an SA establishment bar (the Cowboys, if memory serves), while the digital jukebox worked through country and rock hits from the last four decades. The tunes are also live on occasion: DJs 2abstrakt and Dallas have spun there in the past month and the long-running Los #3 Dinners played a set there last week.

The crowd was decidedly diverse. Several couples dressed in business casual were nursing Bud Light longnecks and shooting pool, while a few other couples evidently on dates were clinking bottles of Fat Tire or Sierra Nevada.

There may have been someone else there, too, and though she didn't put in an appearance during our visit, she's apparently a regular.

As we nursed our brews, Rodriguez related the tale of the lady ghost that reportedly inhabits the building. The apparition is seen most often square in front of the beer fridge behind the bar (spirits know how to prioritize). Though you skeptics out there might rank this somewhere between La Llorona and the Donkey Lady, Rodriguez also mentioned a young woman unfamiliar with the specter story who once fled the ladies' room, screaming about a very one-sided conversation with the spirit.

The primary obstacle Beer Depot faces is location. Distance-wise, there's no challenge — Beer Depot is within two miles of The Station, The Friendly Spot and Alamo Street Eat Bar — but between the proximity to the freeway and lack of connection to neighborhoods already rallying to pro-pedestrian stances, that lack of walkability might be keeping some beer hounds away.

There's no reason for things to stay that way. Beer Depot has a tasty selection of cold beer, a puro laid-back feeling and a bona fide haunting. Don't wait 'til Halloween to stop by — maybe bring Scoob and the gang when you do.