Jaime Monzon
Saxon singer Biff Byford leans on the monitor while guitarist Paul Quinn unleashes a monster riff.
Valentine’s Day may be over but it was a full on lovefest at the VIBES Event Center Friday night as British heavy metal legends Saxon blasted through a two-hour set that hit multiple milestones from their 40-year career.

The band opened with "Thunderbolt," the ferocious title track of their 2018 album, and then immediately launched into the equally fierce and almost-as-new "Sacrifice."

Singer Biff Byford then addressed the fans, saying the next three songs define Saxon, one of the bands that created the blueprint for the early '80s New Wave of British Heavy Metal. To no one’s surprise, those three were “Wheels of Steel,” “Strong Arm of the Law,” and “Denim and Leather.” During the latter, Byford made one family’s night when he picked up their homemade banner from the stage and strung it across the drum riser, where it stayed for the rest of the show.

When most bands play their three biggest songs in a row, it’s usually followed by, “Thank you and good night!” But Saxon was just getting started, and the capacity crowd of 1,500 loved every minute of it.

The band was in great form and obviously having a good time. Guitarist Doug Scarratt had a big grin on his face most of time, while fellow guitarist Paul Quinn was more stoic and generally stuck to stage left but happily acknowledged the fans after each song. 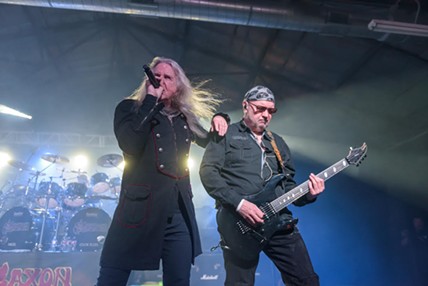 Jaime Monzon
Singer Biff Byford and guitarist Paul Quinn are the two original members of British metal band Saxon.
Bassist Nibbs Carter was a dynamo, bounding across the stage or up onto the monitors to mug at the audience, always making it back to his mic in time for the choruses. Back behind his huge drum kit, Nigel Glockler kept the pace fast and furious.

And then, of course, there was Byford — one foot on a monitor, one arm in the air, like a general marshaling an army with his mighty voice.

By the middle of the show, the set list became more and more of an audience-called playlist. Arguing that San Antonio deserved something special, he let the crowd choose by applause between the 2000-era “I've Got to Rock (To Stay Alive)” and golden '80s slow-burner “The Eagle Has Landed.” Eagle won, no contest. Byford later gave fans a choice between four songs. “The Bands Played On” and “20,000 Feet” finished in a dead heat in that contest, so the band just played both. Byford then made a show of folding up the set list and pretending to swallow it. “This set list is kaputski,” he joked. 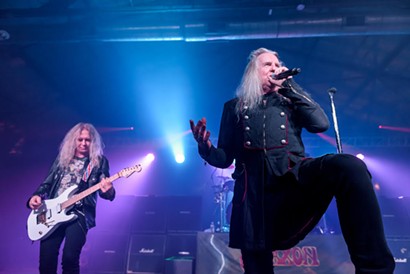 Jaime Monzon
Saxon singer Biff Byford belts it out with guitarist Doug Scarratt chugging along in the background.

After a brief break, the band returned with “747 (Strangers in the Night)” and promises of a new live album this year, The Eagle Has Landed 40, plus a possible return stateside.

But first, Saxon had a show to finish. They closed with "Princess of the Night.” At face value, it’s an upbeat love song about a train. But maybe the train’s a metaphor for something; something fast, something unstoppable, something beloved.