Brooklyn Sucks, Except for the Flatbush Zombies 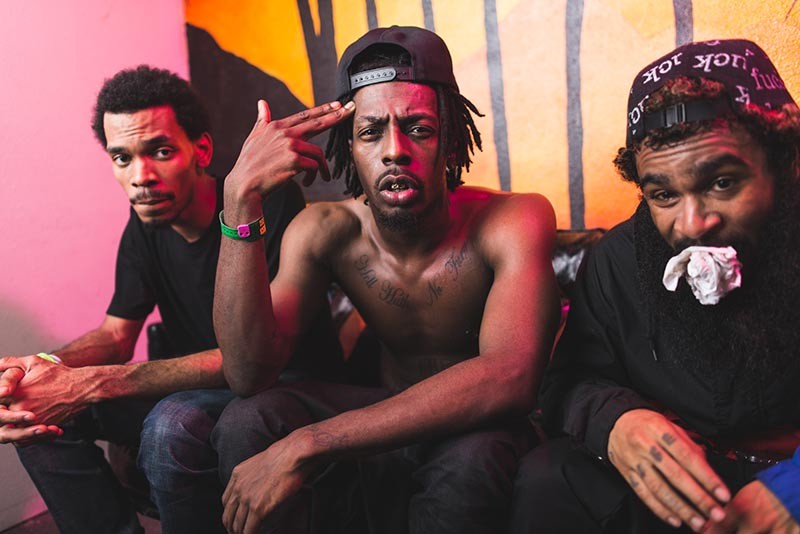 Just how branded has Brooklyn become? There's a prime-time sitcom set there. Its most famous resident now reps the town as a part NBA owner rather than a rapper. Anne Hathaway, Norah Jones and Paul Giamatti live there. Most recently, Sour Patch Kids bought a house where touring bands can stay, on the stipulation that they tag Sour Patch on Tumblr a predetermined number of times. All of which is to say, Brooklyn needs the Flatbush Zombies.

Meechy Darko, Zombie Juice and Erick "The Architect" Elliott formed the Zombies back in 2010, pooling their shared love of horrorcore, trash culture and gritty '90s hip-hop into a distinctly dynamic sound. Their ultraviolet, borderline nihilistic lyrical leanings early on branded them as a sort of East Coast answer to Odd Future. But time has shown their tastes to be NYC to the core. As the leader, Meech careens between the absurdist brutality of Ol' Dirty Bastard and the poli-conspiratorial leanings of El-P and Company Flow. In the sidekick role, Juice veers towards the non-sequitur-laced, faded flow of Das Racist, sparked with a bit of Busta Rhymes spitfire. And as the Zombies' not-so-secret weapon, producer Erick has managed to unload the grittiest clips from 36 Chambers and pack them with 21st-century production firepower.

They're also a principled bunch, insisting on releasing all of their music for free and flatly refusing to sign with a label. On top of collabs with the likes of Danny Brown, A$AP Rocky and Action Bronson, their music catalog centers on two mixtapes: 2012's D.R.U.G.S. and 2013's Better Off Dead. In Ramones fashion, the Zombies take a one-track approach to their songs: "Bliss" is about things they hate (religion, global warming, the moon, etc.); "Regular and Complex" is about hustling; "Thugnificense," "Mary, Nothing Above Thee" and "Thug Waffle" are about weed (they really like weed); "Drug Parade" is about, well, you get the idea.

Simplistic though the approach may be, that directness has made the Flatbush crew into one of the most brutally potent live acts on the road, rendering many a venue a war zone during their sets. They've now also aligned with fellow Brooklynites The Underachievers, releasing the collaborative EP Clockwork Indigo and launching the nationwide tour that brings both groups to the White Rabbit this Saturday. Here's hoping the Zombies stay hell-bent on building something in Brooklyn other than $2,000 loft apartments.