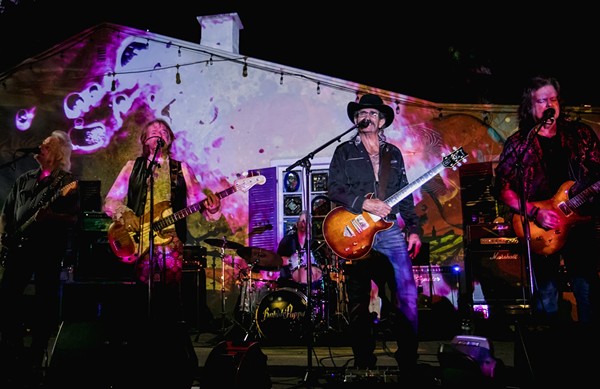 
It’s been over half a century since Bubble Puppy first landed on the Texas music scene. Forming in San Antonio in 1966 after their previous band The Bad Seeds disbanded, the group's first show was actually opening for The Who at the San Antonio Municipal Auditorium in 1968. A year later, their first single "Hot Smoke and Sasafrass" would impressively secure the number 14 slot on the Billboard 100 chart, capturing the attention of national audiences with the track's winding duel-lead guitar licks, vocal harmonies, heavy drum rhythms and unexpected transitions.

But a lot has changed since the late '60s. From switching their name to Demian and heading out to California after a bad deal with record label International Artists (Red Krayolas, 13th Floor Elevators), to car accidents, a couple attempts at reuniting the band in the late '70s and '80s, and the death of founding bass player Roy Cox, it’s safe to say frontman Rod Prince and the gang have been through some shit.

The comeback was slow, to be sure. In 2011, after the late Margaret Moser (revered music journalist and co-founder of South Texas Museum of Pop Culture) asked to them to play the Austin Music Awards, it seemed like the Puppy was back and better than ever playing select shows across Texas which led to headlining performance at the inaugural psychedelic music festival Psych Del Rio.

With the only original members being guitar/lead vocalist Rod Prince and drummer David Fore, Mark Miller (guitar/vocals), Gregg Stegall (guitar/vocals) and Jim Umstattd (bass) round out the band and judging from this latest album Certified Badass (a live studio recording released last month which includes tracks from Prince's entire catalog), the now five-piece has managed to capture that same spirit of free-flowing psychedelic rock they originally were able to capture in the late '60s.

Their next show is in Austin, and while we don't usually promote going to check out bands in different cities, catching these rock 'n' roll veterans in their environment will be worth the trip.


The Current caught up with frontman Prince to talk about the new album, plans for the future and what they’ve all been up to all this time.


OK so, that Demian record came out in 1971 when y’all when out to California. Margaret Moser hit y’all up to play The Austin Chronicle Music Awards in 2011. What were you doing in that forty years in- between?

After Demian, I came back to Texas after the band broke up and hung around for a little bit. Me and Roy went back out there to [California], – the late bass player – we had a band with Goldy (Goldy McJohn) and Jerry (Jerry Edmonton) from Steppenwolf, Manbeast. We did that for, I don’t know, about a year, I guess. That folded and I came back out to Texas, and I hadn’t been back out to California since (laughs). No more Hollywood. We did a reincarnation of the Puppy in '73 maybe. We did that ‘til disco made it not even feasible to try and work. And I got a job in a theater as a janitor. And that lasted for about four months before I became a projectionist … So I ran the movies for five years. Then I had the Prince Trio. And that was around the time we met Margaret (Moser) way back then. And she’d been a friend all those years ‘til she passed. Good ‘ol gal, one of my favorite people.


Yeah, I heard she was an awesome person. I unfortunately never got the chance to meet her.

Yeah she was a sweet baby … While the Prince Trio was going on we put the Puppy back together, minus Rob. Me and Fuzz and Todd and Rob was still playing bass. And then there was a car wreck on June 11, 1977. Dueling Volkswagens. We got T-boned on the passenger side and it paralyzed Rob on his left side for like eight months or something.

Took him out of the picture. My cousin was in the back seat – killed him. Threw me out of the car. It was a mess. Ruptured my spleen, internal bleeding. I got a scar going from my chin down to my knees…

Yeah, it was pretty ugly. When we started coming around from that. Obviously Rob was out of the picture as a bass player. We got George Rarey to play bass. That incarnation evolved in (a new band) Sirius. And we did a Sirius LP in '78 I guess, something like that. It was a good record I’m pretty proud of it. And after we broke up in '79, I went into the building trade with a friend of mine from the old days. And I worked construction, new houses, remodeling and all that stuff for about 20 years, I guess. 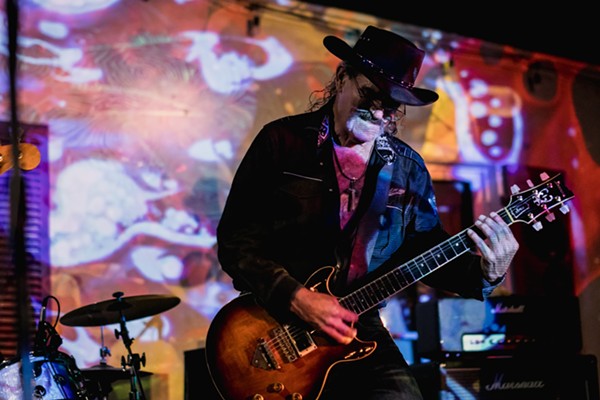 Were you still playing guitar that whole time?

Well, no. In '84, we did an actual Puppy reunion with the original band and did an LP, and that was a real short-lived reunion. All the problems that caused the band to break up in '71 weren’t resolved (laughs).


(laughs) What were those problems before?

Just different musical directions. Todd wanting to go one way, and me and Roy wanted to go another. Before that, we were were used to playing every weekend – making about $2,000 a show. And practicing anytime we wanted to, playing at the house, whatever. And we got out to California and nobody knew who we were. And you can’t just play in a house. If you have mega bucks, you can set something like that up, but we had to rent a rehearsal room and we always lived together. There was a band house situation. [We were] true brothers. True family. In spite of all the varying degrees of ego between Potter and Cox. Showbiz stuff. Out in LA, you couldn’t do that. So we split up. Me and Roy went one way. Cox went another, Fuzz went another, and Todd went another direction. It was just too different for us to hold it together. And it was just the same thing at the reunion. And by that time, by '84, Roy had become a terrible drunk, and he was just a mess. I mean, you know people like that I’m sure in the music business.


Yeah (laughs). Yeah, it’s easy to fall into that.

True enough, it’s a hard thing. But anyway, we did the Wheels Go Round LP in that reunion.

Yea, '84 or '85, I’m getting a little long in the tooth here, I can hardly remember my own name (laughs). But after that, I played a little bit around the house. Mostly, I just worked. In '90, I had a little accident with a garage door and ruined my left hand. Most of the fingers came back except for my left index finger. And, even now, it’s just probably got a range of motion from the middle knuckle to the end of an about an inch. That’s all it will move.


You can still nail those guitar solos though. I don’t think anyone can hear a difference.

Well, I’ve learned to play again. Since 2011, when we did the start of this again. I’m getting there. I still can’t play a C chord, first position, first position D, or anything like that. I’ve learned again ... 22 years I was just disgusted. I’d pick it up and go “shit.” I wouldn’t play anything. I didn’t hardly play at all. No performances or nothing. And I realized that that time I was half myself. I wasn’t whole. I was born to play music. And a lot of people in show business will do that, they’ll go, "Alright, I’m sick of this," 'cause show business sucks. 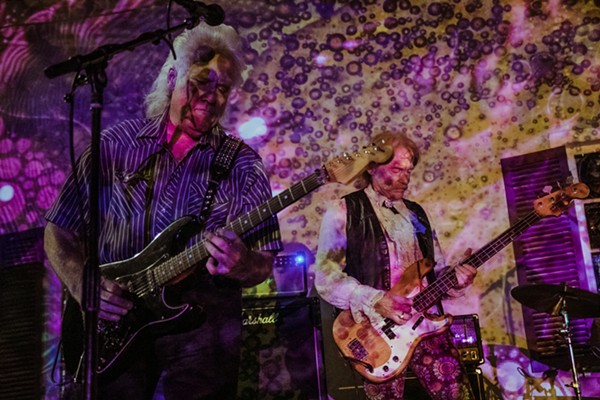 The actual performance is a whole different thing. If that’s all there was too it, I would’ve never walked away from it, because I love it above all things. I didn’t really realize that I was only operating with half myself, until the very first time we played that show at the Austin Music Awards … I hadn’t even picked up a guitar in so long. With me and Fuzz and Todd and Mark playing all my parts, all the Puppy stuff that I couldn’t do, it sounded amazing. I was playing all I could play and sing, but I tell you what, you get up there in front of 2,500 people screaming and howling you go, “Oh shit, I’m whole again.” Since then, I’ve been working really hard, getting my chops back, and loving it. Just loving being able to play again ‘cause suddenly I was whole.


As a creative person I couldn’t imagine, just going into something like construction. That would make go crazy. I am so stoked for you that you’re back in this deal. One of my co-workers was at the Psych Del Rio show and she mentioned that y’all just looked like y’all were having so much fun and that’s exciting.

This particular incarnation ... I didn’t think this kind of thing existed. I didn’t think you could get there. There’s no egos, we haven’t had an argument about anything in the five years we’ve been together. Since we parted ways with Todd (laughs). And it’s true family. It pales the old band as far as brotherhood. It was never like this. Of course, we’re all older now, all that childhood stuff is long behind us. And it’s more fun that I’ve ever had in my life by about 1,000 percent. You talk about bliss. Man, I tell you what, it doesn't get any better than this, my brother. Whoa.

Not really. There’s a bunch of stuff in the can from the old days. It wouldn’t surprise me if we put out another CD next year of that stuff. For an opener, as far as this band, the live CD is what people wanted. Those who knew the band and the people who would come to see us, what they want to hear is the old stuff, they don’t want to hear any new music that they can’t relate to. Point being, anything that I write now wouldn’t compare to the old stuff.


You’ve got art and creativity going through your veins, I don’t think it’s gone. I definitely see y’all putting some new stuff out. I’m just going to speak that into existence for y’all (laughs).


I think people want the old stuff sure but, I think with the psychedelic rock ‘n’ roll resurgence, people would want to take some mushrooms and listen to Bubble Puppy.

Well, there’s crazy licks and entire songs, they just need some words or a melody. I’ve got 40 years of backlogged stuff I need to finish. So, the material’s there, there’s plenty of it, it just takes a minute to get down and whip it into shape.