Budget Bloodbath: Defunding San Antonio Arts Organizations Will Save Money During the Current Crisis, But at What Cost? 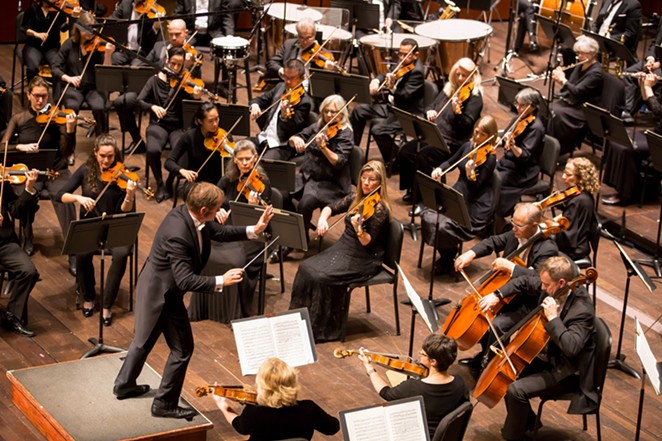 Courtesy of San Antonio Symphony
Given the scope of the coronavirus pandemic, San Antonio arts groups were expecting budget cuts. But the city’s recent decision to slash arts spending through the end of the year opened deep and painful wounds.

On Wednesday, April 8, the city furloughed 270 municipal employees and canceled the remainder of this year’s funding for local arts organizations. Institutions including the Guadalupe Cultural Arts Center, the Esperanza Peace and Justice Center, the San Antonio Symphony and Ballet San Antonio lost 20% of their allotted city funding for the year.

Members of the arts community warn that the cutbacks are likely to run deeper than a few canceled shows or concerts. They’re a deep blow to San Antonio’s rich local culture.

“We’re not about just entertaining,” said Graciela Sanchez, director of the Esperanza Center. “We’re totally connected to our communities.”

City officials made the draconian cuts to offset lost tax revenue from San Antonio International Airport, the Henry B. Gonzalez Convention Center, the Alamodome and local hotels, all of which have languished as people stay at home.

Since the cuts were announced, some arts organizations put on a brave face.
“We all must be dedicated to both helping contain this virus and to being ready and able to resume everyday life with the joys and pleasures that include live music performances across our city,” the San Antonio Symphony said in a statement.

In that same statement, the symphony said it will soon announce its 2020-2021 season.

“Announcing in this time of uncertainty is important,” the organization added. “Despite the realities the pandemic has made for today, we know that life will revive and continue.”

The Public Theater struck a more somber tone, acknowledging both the city’s proven commitment to the arts as well as the undeniable effect the cuts will have on cultural institutions.

“Without the city or Area Foundation support, the landscape of our arts community (and for sure our professional arts community) will look different in 2021,” theater officials said in a statement.

“Our partnerships with many of the departments in the city are essential to The Public Theater’s survival and growth. We are saddened for those that will be in limbo and [are] working diligently to keep the ship sailing. We can relate. Our hearts and thoughts are with them, and we know we will all appreciate each other more when we overcome this.”

The Esperanza’s Sanchez said local arts organizations can struggle through the current round of cuts. However, she cautions that the belt tightening may not be over.

“I think probably all of us will survive with that cut now, but nobody’s telling us what the future is like,” she said. “It’s March, April, May, and then the summer months that are going to be hit the hardest. That’s probably the largest revenue the city gets for hotel-motel funds — my assumption, again, I don’t know. So, what does it mean next year, from October? Do we get half of that amount that we all got, do we get 25%, do we get nothing?”

To be sure, San Antonio is already seeing casualties. On Friday, April 17, Luminaria announced the cancelation of its 2020 Contemporary Arts Festival.
“With the overwhelming health concerns and the projected insecurity of funds resulting from the COVID-19 pandemic, we believe this is the most responsible way to proceed during these unprecedented times,” Luminaria officials said in a statement.

‘A Drop in the Bucket’

It’s almost certain other cancellations will follow as arts groups reshuffle their finances and adapt to a new normal where social distancing makes programming difficult to present. Given the cultural vacuum that’s likely to create, how much the city is actually saving?

The cuts — which affect 37 local arts and music programs — amount to $995,000 in savings for the remainder of the 2019-2020 fiscal year, according to a recent analysis by KSAT News. When compared to earlier cuts of $82 million, or 2.8% of the total $2.9 billion budget, the city is clawing back what amounts to a paltry sum.

“That’s really a drop in the bucket,” Sanchez said.

With many facing unprecedented financial insecurity, it’s natural to prioritize funds with an eye on what does the most good. However, Sanchez argues that institutions such as Esperanza are doing more than staging concerts or art shows.

As the COVID-19 crisis escalated, Esperanza staff members made a point to keep in touch with at-risk community members, including the elderly, the financially insecure and people with disabilities. Those efforts go beyond simple phone trees: staffers have stood in line, shopped for groceries and done other tasks for those in need.

“A lot of our folks aren’t even on social media, so we’ve kept staff calling — from the beginning — our list of elders, our list of people that are just low-income that we know,” Sanchez said.

Ultimately, as San Antonians shelter in place — passing the time by reading books, watching films, listening to music — it should be readily apparent that the arts have immense value. While city’s cuts are understandable, for many in the arts community they still feel like a knife in the back.