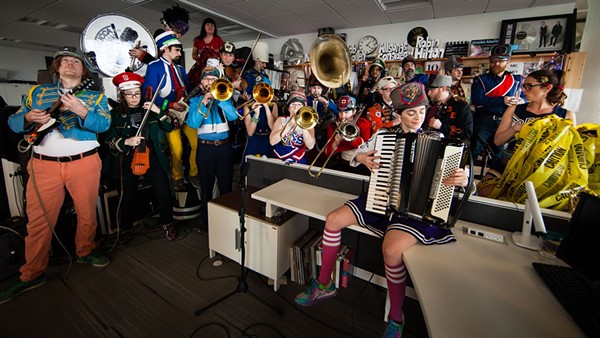 Youtube
One of the larger performers at the tiny desk, Mucca Pazza
As many struggling artists can attest, it's hard out here for a pimp, y'know, when you're trying to make that money for the rent. When the Cadillac and gas money's spent, there's a whole lot of you-know-whats jumpin' ship. That is why NPR's Tiny Desk Concert Series is such a beacon in this freezing tundra of futile music creation.

The level of artists that play the infamously small, cubicle'd area span the great range of commercial potency. One week they may host a little known indie stalwart from the Dakotas, picking out some Midwestern yodel-folk for a handful of online admirers, the next they're bringing in vocoder-kingpin and platinum artist T Pain, or Adele. Last year was the first installment of NPR's Tiny Desk Concert Series contest, in which Robin Hilton and Bob Boilen look to the post-modern A&R rep that is Youtube, much to the chagrin of Radiohead's Thom Yorke, to find the next ... well, artist that they like.

That's the beauty of the series. They really just pick what speaks to them. The informality is not only a fertile hotbed for intimate, often jaw-dropping performances, but it's a showcase of the starving-artist class as well as an opportunity for more established performers to show off their chops outside of their typical, often over-inflated, environs.


That being said, this year they are offering anyone with a Youtube account the opportunity to submit a video of themselves, or their band, performing one original composition. The piece will then be judged by a panel of esteemed music lovers for a chance to perform at several Lagunitas Brewing Co. sponsored concerts, as well as in the very office that has played host to an uncountable number of musical talents.

The details are explained in this adorably NPR-ish of videos, below. The guidelines and other pertinent info regarding the entries can be found here. Good luck.