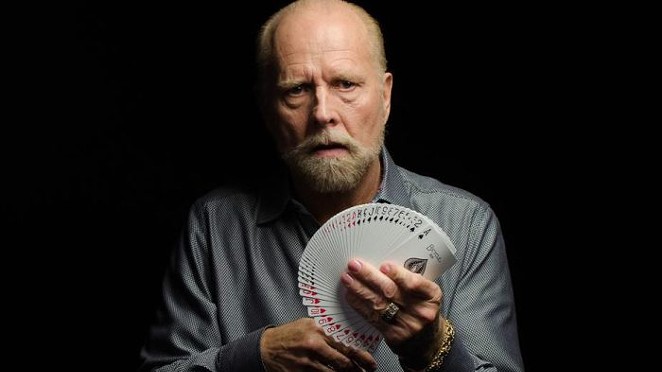 Sundance Selects
San Antonian Richard Turner is considered one of the greatest card magicians in the world.

If you’ve ever seen a magician perform a magic trick and asked yourself, “How the hell did he do that?” you ain’t seen nothing until you’ve seen what Richard Turner can do.

Turner, 63, is a San Antonio resident and considered one of the best “card mechanics” and sleight-of-hand illusionists in the world. He was the recipient of the Close-Up Magician of the Year award from the Academy of Magical Arts in 2015 and has performed shows for audiences across the globe, including for celebrities like Johnny Carson, Bob Hope and Muhammad Ali.

What makes Turner's talent even more impressive is that he is blind. His eyesight problems started at the age of nine when he contracted scarlet fever, which destroyed part of his retina. Over the years, Turner’s vision continued to deteriorate until he became completely sightless. Despite his handicap, Turner has never used his blindness as an excuse. In fact, for his entire career, he didn't like when people mentioned it before his shows.

“For years, if somebody brought it up I would get irritated with them,” Turner told the Current during an interview last week. “Now, I am more willing to share the parts of my life that I didn't want to talk about before.”

In the documentary Dealt, Austin-based director Luke Korem takes a look back at Turner’s life and career, the obstacles he’s had to overcome and his unwillingness to allow his disability to define him.

Originally from San Diego, Turner moved to San Antonio in 1992 when the Gaylord Entertainment Company opened Fiesta Texas (now Six Flag Fiesta Texas). The company hired Turner, gave him his own show and named him a spokesperson and ambassador for the amusement park. He worked at Fiesta Texas for seven years and at the Buckhorn Saloon & Museum for nine.

Sundance Selects
Richard Turner started going blind at the age of nine when he contracted scarlet fever. The documentary Dealt explores his life and career as a card magician.

Today, Turner is semi-retired and spends his time at his home on the North Central side of San Antonio with his wife Kim and continues to travel the country wowing crowds with his masterful card trickery. He also works corporate events and gigs for Don Strange of Texas.

Although filmmakers had pitched ideas to Turner in the past about making a movie on his life, it wasn’t until Korem, the son of a close magician friend, showed interest that he considered it. Ultimately, he is happy with the outcome.

“I think they did a masterful job making this film in a way that wasn’t cheesy,” Turner said. “I didn’t want it to be a film about someone that is handicap making good. They told it in an artfully and tasteful way.”

In the end, Turner hopes Dealt will inspire others who have physical limitations to push themselves and never give up. It’s something he’s been doing his entire life – with or without a deck of cards in hand.

“I've swam with sharks, climbed thousand-foot cliffs, walked tight ropes,” Turner said. “You name it, I've already done it. If this film gives people confidence, it’s all worth it.”

Dealt opens exclusively at the Santikos Bijou Theater Friday, November 3. Turner and Korem will be in attendance that night for a live Q&A following the 6:30pm and 8:45pm shows and on November 5 following the 4:15pm show.