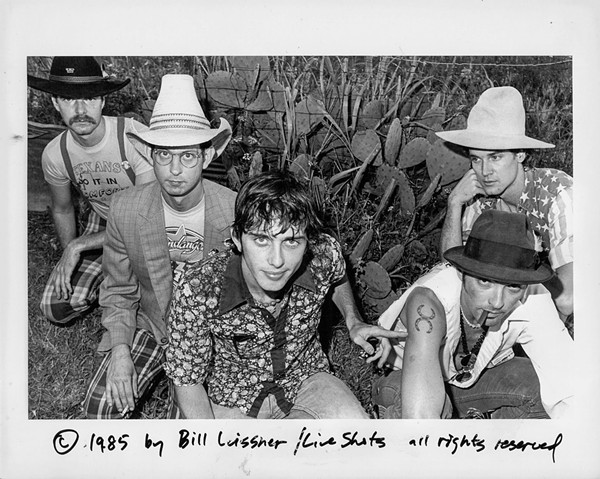 courtesy Jeff Smith
Hickoids as cute BBs
After surviving numerous lineup changes, tweaks in sound and the death of guitarist Davy Jones, the Hickoids are gearing up for a two-day celebration of their 35 years as a band with one show in Austin and another in San Antonio.

Based on its energetic live show and theatrics, the band became a mainstay in Austin's and San Antonio’s burgeoning underground music scenes. After touring relentlessly and releasing a few records via the label Toxic Shock, however, the members called it quits by 1990.

courtesy Jeff Smith
The Hickoids tearing it up in front of an enthusiastic crowd.
But after playing a sprinkling of reunion shows, Smith and Jones officially reunited in the 2000s. They hit the road again — hard — playing something like 500 dates across North America and Europe until Jones lost a battle with lung cancer in 2015.

“We’ve always been getting the band back together since it started,” Smith said with a laugh. “The band has had 30 people in it ... The whole thing is a monument to stubbornness.”

After an induction to the Austin Music Hall of Fame and a few more lineup changes, the band is still together and with Smith firmly at the helm.

“I’ve said jokingly, 'They can have my microphone when they pry it from my cold, wet Depends,'" Smith said. “I plan on playing as long as I’m physically capable of doing it and as long as people still show up and I have some people willing to play with me.”

Celebrate the life and longevity of the Hickoids at the Bang Bang Bar on Saturday, March 30, alongside no-holds-barred country act the Beaumonts, proto-punkers the Next and youthful rock and metal act Z-Pocalypse.