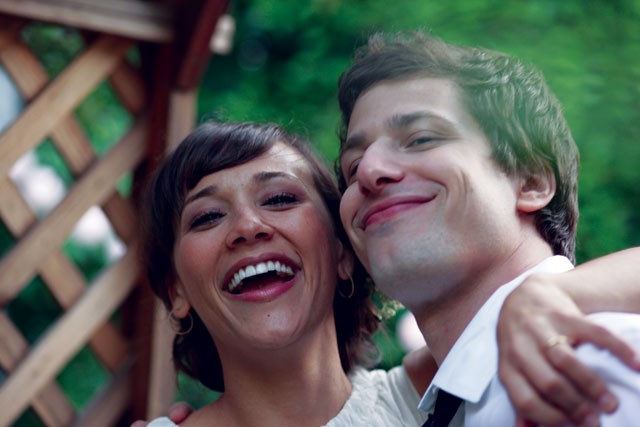 As someone who loathes the conventions and clichés of most modern-day romantic comedies as much as I do, actress/writer/producer Rashida Jones (TV's Parks and Recreation) just might be the perfect woman — at least the perfect woman to spend a day with at the movie theater. Suggest watching something where Katherine Hiegl flips her hair, stumbles around in heels, and falls for a hitman, and she probably wouldn't be shy about rolling her eyes at the idea.

In the independent rom-com Celeste and Jesse Forever, Jones, who co-wrote the screenplay with actor Will McCormack (TV's In Plain Sight), seems to have made a concerted effort with him to avoid what makes many of these boy-meets-girl narratives feel exactly like the one that came before it. C&JF isn't flawless in its attempt by any means, but with some clever dialogue that doesn't overload on adorableness and an honest performance by Jones herself, there's enough proof here to believe the genre doesn't always have to feature a pre-packaged love story.

Directed by Lee Toland Krieger (The Vicious Kind), C&JF stars Jones and Andy Samberg (That's My Boy) as the title couple going through a divorce but attempting to save the friendship. As a successful marketing trends partner, Celeste has always quietly disapproved of Jesse's starving-artist lifestyle. "He doesn't have a checking account or dress shoes," she criticizes. When both start dating again, the two must come to terms with their break-up by letting go of one another and moving on with their lives.

While the set up sounds like somewhat of a network sitcom, C&JF's script takes some unique angles at familiar situations and allows the nerdy chemistry between its leads to play out naturally. Not all rom-coms have to be When Harry Met Sally or Annie Hall, but it's nice when they don't make it a point to be the exact opposite.