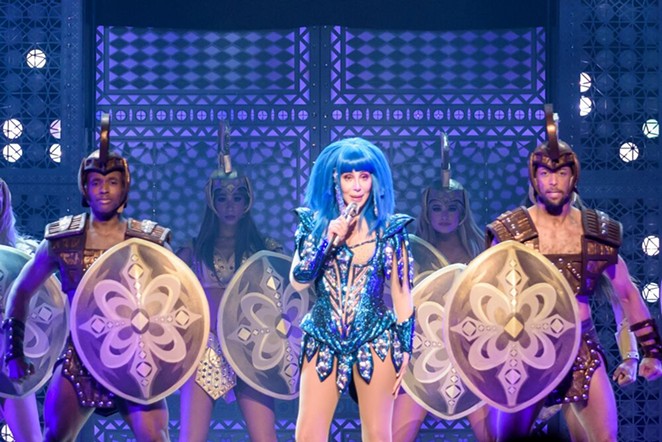 Jaime Monzon
When Cher makes an appearance in your city, it’s not a show to miss.

Sure, she's a multi-faceted performer whose career has spanned six-decades, but her her show Tuesday night at the AT&T Center proved she's not only a pop icon but a living legend.

Sequined outfits sparkled amid the sea of people packing the arena to see the 73-year-old singer. The audience included teens, seniors, straight people, gay people, drag queens and everyone in between.

Nile Rogers and Chic opened the evening, performed an hour of disco-era hits including “I’m Coming Out,” made famous by Diana Ross, and “Lucky,” popularized by Daft Punk and Pharrell Williams.

After Chic finished, the lights dimmed and Cher emerged, suspended high over the stage in a blue wig and Vegas show girl-inspired costume. She belted out  “Woman's World” from her 2013 album Closer to the Truth.

After the number, Cher talked to the audience, sharing humorous stories including how she reluctantly agreed to go on the Late Show with David Letterman, even though she found the host condescending.

“Dave looks at me and says, ‘Tell me, Cher, why have you never wanted to come on my show?’ and my head exploded,” she told the crowd. “Because in those days — you know, back in the caveman days — you weren’t allowed to say bad words on TV. So, my brain was going so quickly, ‘How do I do this? I don’t want to be a liar. He’ll know, and everything will just turn to shit.'"

Cher continued, "So, as I was thinking of all the ways I could get out of [answering the question], I didn’t realize I had said out loud, 'Because I think you’re an asshole.' He said he was traumatized for five years.”

Jumping back into the music, Cher dazzled the audience with an array of costume and set changes as her band and dancers kept up with her through a career-spanning retrospective. And yes, she was actually singing and dancing. (Take note, Britney).

The set included “Strong Enough” and “All or Nothing” from 1998’s Believe and “If I Could Turn Back Time” from 1989’s Heart of Stone. She even performed a tear-jerking rendition of “I Got You Babe” as a video projection of Sonny Bono accompanied her.

As Cher closed the evening with the auto-tuned fan favorite “Believe,” the sold-out AT&T Center erupted in applause.

But the claps and cheers didn’t feel like they were for Tuesday’s show alone. The audience seemed to be applauding Cher as an icon — as part of American history, as someone we invited into our living rooms and families. As someone writing the soundtrack to our lives.