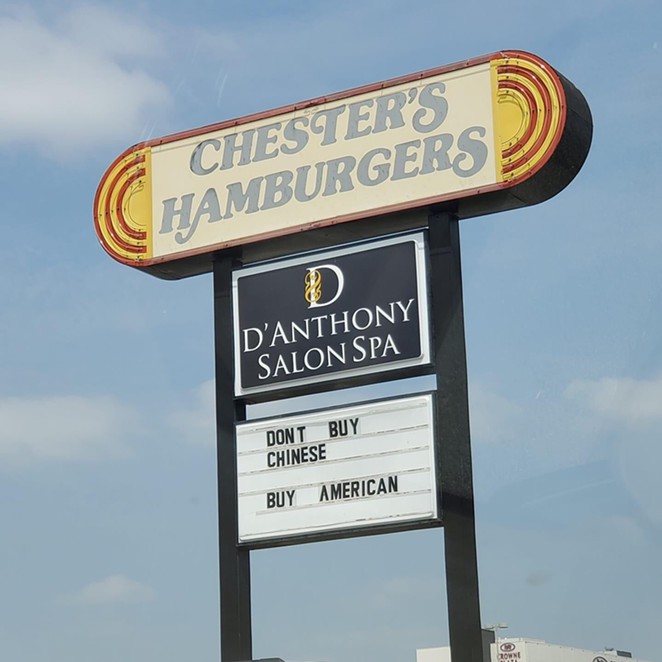 Twitter / DeniseFlores
Rather than advertise the tastiness of its own takeaway food, Chester's Hamburgers decided it had a more important message to share with San Antonio: "Don't Buy Chinese. Buy American."

At a time when racist attacks targeting people of Asian descent are at an all-time high — stoked in large part by racist messaging from the Cheeto in Chief — the local burger joint located at 1006 NE Loop 410 updated its sign with the anti-China message.

When queried by MySA, Chester's owner Dale Mabry not only confirmed that the message was from the restaurant but doubled down on the message.

"Regarding the marquee at Chester's Hamburgers, there is no implied meaning other than to buy American products and not products from communist China," Mabry told MySA in an email.

However, Mabry also admitted that the marquee had been changed, perhaps in light of the social media backlash from locals who consider it xenophobic bullshit.

While MySA was unable to confirm whether multiple Chester's locations splashed the message on their marquee, a little digging on Twitter appears to show the restaurant's 9980 W. Interstate-10 location sported the same verbiage:


Luckily for folks sensitive about such matters, there are plenty of other burger options in San Antonio. Those hankering for a patty that isn't basted with bigotry can check options available for to-go, delivery and curbside on the Current's Good to Go directory.