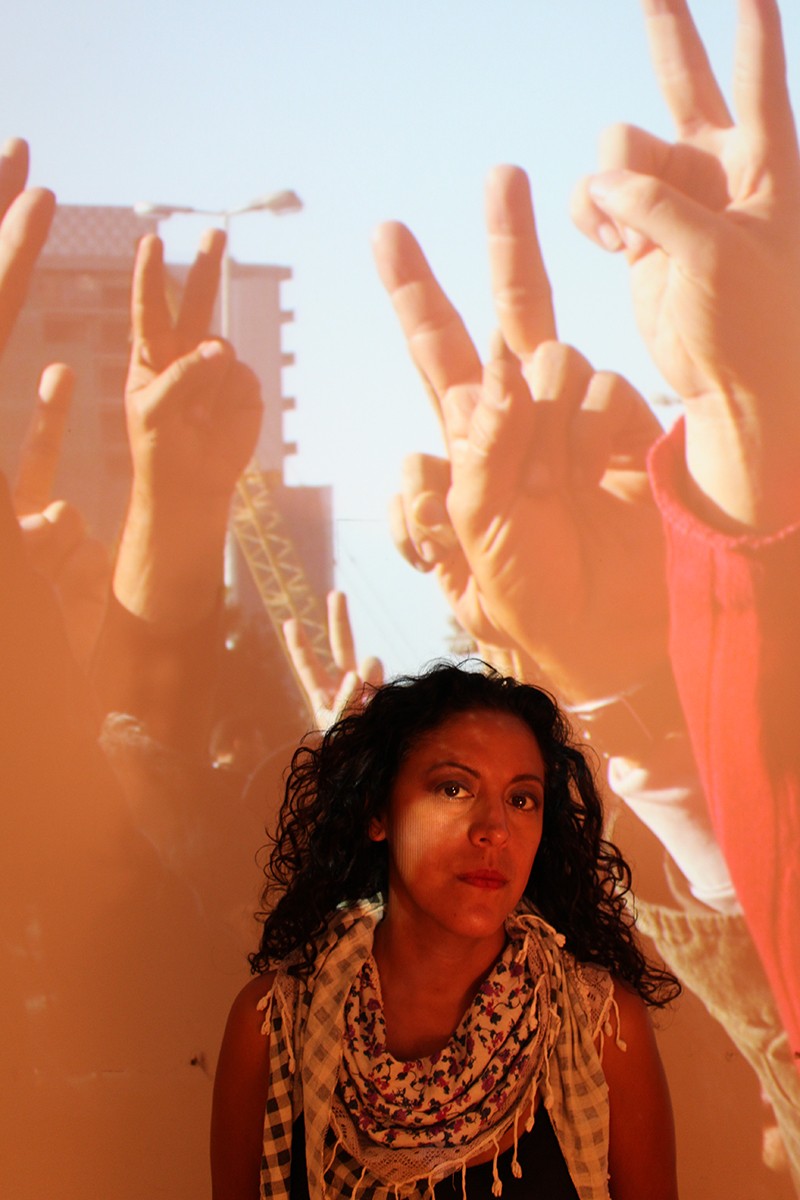 Doyle Avant
Anna De Luna started as a performer but wanted to be a playwright in her own right.

Their stories began with perseverance. Anna De Luna, 19 and painfully shy, fumbling through her first audition, only to audition again and again until she finally got a part. Marisela Barrera, a girl with a lisp clad in a handmade costume, forgetting her lines in the junior high play, eventually obtaining a BFA in acting and serving as director of the theater program at the Guadalupe Cultural Arts Center. Despite their successes, the fact remained that Chicanas were hardly represented onstage. Today, their stories continue with the perseverance to change that and give voice to a new kind of theater.

For Anna De Luna, things changed about 10 years ago; San Antonio's roles for Latinas suddenly seemed to disappear (a fact she attributes to Barrera leaving the Guadalupe). Frustrated but not beaten by the sudden loss of work, she turned inward and developed Chicana Atheist, a solo show that explores her own identity. Later, she transformed her work with the San Antonio AIDS Foundation into The AIDS Lady, a piece that has been performed in Walgreens parking lots and beyond to promote HIV awareness and testing. Her latest work, My Arab Fall, chronicles her time as a tourist in Egypt after their Arab Spring, positioning her view as a Westerner alongside that of an Egyptian activist.

Marisela Barrera plays many roles — director, writer, performance artist — but regardless of the title, she's always a cultural worker. She has worked with Jump-Start, the Witte, the Guadalupe and others in an effort to unearth and document Chicana stories. Today, she is working toward an MA and an MFA in creative writing, literature and social justice at Our Lady of the Lake University. Her play, Cuero, la Ruby Red, y el Big Bird is a trio of stories infused with urban legends, daydreams of Selena and all the mystical richness of Barrera's own Rio Grande Valley childhood.

What do you hope will be the audience takeaway of the show?

I know you started as a performer. What made you to decide to transition into the role of writer or director?

I love acting, and I used to always wish, "Wow, I can't wait to meet that great playwright who's going to make all these great roles for me." And it wasn't happening, because there aren't a lot of roles being written for Latinas. But at the same time I was like, "I'm waiting for this playwright to write me all these great roles but maybe I need to start doing this myself." ... I would tell people stories about things that had happened to me and I would think, "this is a show" or "this is a monologue." And I just started forcing myself to write.

Oh my gosh, the best thing — the thing that helps me the most is actually just getting up and improvising on my own or with someone else. I can't just sit at the computer and tap away. I have a boyfriend and he's just click click click click clickety click and I just want to strangle him. Why can't I do that?

You've performed roles that other people have written and then you've performed your own. Is there any difference in the relationship you feel to the audience when you perform something you've created yourself?

When you were at UTSA, you said you joined the theater because you simply had to. What happened?

What happened was I think I was a freshman and I had always wanted to do it when I was in high school, but I just didn't have the courage. And I remember I was in the University Center and I saw some fliers for an audition for Arsenic and Old Lace and I was like, "Damn it, I can't take it anymore, I've got to audition." I was so nervous, and I went to the bathroom to put on makeup or fix my hair or something and there was this other young woman in there ... and doing all her vocal exercises and I was just like, "Oh my god, I'm going to be terrible." So I went in there and I did the audition. I really flubbed up because I was trying to read the lines, then do the audition and just act like someone else. It was awful ... But after that I auditioned again and again and it got easier. But I just had to do it.

If you had a hope for theater, what would it be?

I think that for this area in particular we would have more schools for theater, especially for Latinos, to get them started at an early age. There also needs to be more professional development for artists that do decide to stay in San Antonio ... We have a lot of people that have really amazing stories to tell, but maybe they don't have the skills to write them down, so more writing workshops, playwright contests. We're just so rich with stories here ... I would like to see more infrastructure set up for the arts so in the end it would impact the theater community as a whole.

What advice would you give a first-time writer who wants to tell their story?

Get a deadline so it gets done. A very scary deadline. Meaning it's going to be performed and you have to sit down and do it. You can't procrastinate (or you can procrastinate but then you really have to do it). And ask for help from friends. Get some other people to read it and give you advice, people you trust. Jump in, do it, have fun.

Bryan Rindfuss
Marisela Barrera, who's working on her MFA at Our Lady of the Lake, brings a show based on her border region upbringing.

Tell me a little bit about your show. It's three acts?

Yes, it's three different stories and in the past. I really love Chicana literature, so I've adapted several of my favorite books and short stories to the stage in the past. Sandra Cisneros, Anna Castillo and some others. So this is the first time using my own literature to adapt to the stage.

Describe that process of self adaptation. Are you bringing in a script to the actors or are the actors devising it based on what you've previously written with the short stories?

We have the short stories because that's what we started from, but we're not deviating from the text. There's no improv. The adaptation comes with what we cut, sort of changing the tense sometimes ... [The rehearsals have] been about getting it up on its feet and testing stuff out. I've discovered a lot of things that I think [will] enrich it ... because what I want to do is go back to the short story form with what I learned through this piece. I think one of the challenges here with the teatristas in this region, myself included, is we don't do a good job of documenting our work. Part of this is my test in terms of creating a living script after the play is over that maybe will carry on. So if the story is compelling enough then perhaps other people will want to read it.

As a theater maker you're playing all of these roles — you're an actor, you're a writer and you're a director. Can you describe what it's like to be playing all these parts?

It's actually by default ... It's a struggle. It is hard. That's why I call myself a worker: a cultural worker. It's work and when people come and they say, "Hey what are you doing tonight?" And it's like, "Well, I have rehearsal." And they're like, "Oh, well come have a shot with me before." And I'm like, "Hell no — this is work." Sure, I'll have a tequila afterwards, but it is work. I'm wearing many different hats and many of us do in this, because of money. It's sparse. The infrastructure is not what it needs to be in this city ... And I'm not narcing on San Antonio because throughout the United States, it's a huge challenge. You know, we want to better reflect our demographics, tell those stories, and document them in a way that will be marketable for other theaters ... It is a struggle, it is work, it is not a hobby ... You have to be obsessive about creating teatro.

Tell me about your transition from being an administrator and a curator into being a creator and what made you do that?

That's an interesting story. Back then it was really important to have a lot of female voices on the stage, I stepped away from that position at a time when it was undergoing a lot of transitions. It was like whoa, it's all about the transition and not about the work anymore. So I had to take a break from that, so I did ... It's been very liberating making that transition. It's scary too, because the reality is I don't have a regular paycheck. People might perceive that I work a lot in the community, which is true, but it's really like hustling too, you know, it's like I do as much hustling and getting paid for my work as I do volunteer work which is sort of good and bad ... So sometimes it's frustrating, which is why I went back to school to give back to myself and improve my work and get more disciplined in terms of generating work and documenting it.

What is your one hope for theater for your daughter's generation?

She's already living it because she's at Bonham Academy and she has a nicer facility than I work at. It's so cool, it's only K-8, so maybe that's how they got away with creating a black-box theater on campus ... I'm not saying she has to do theater, but I just hope that whatever she decides to do it's not demanding, but it's actually fun. So I'd like to share that and bring more people into the loop of breaking down the facade of theater being brainy. It's actually not. It can actually be super lucha libre. It could be anything really; you break down that fourth wall and you just go for it. But you have to figure out what story is compelling and which one is the one you could see at midnight on the Lifetime channel.