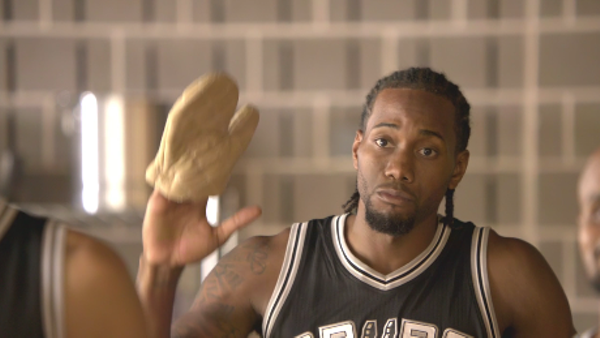 Raise your hand if you are ready for some laughs.

The San Antonio Spurs' 2015-16 season opener against the Oklahoma City Thunder is this Wednesday in OKC, and fans are getting a special treat.

The Spurs and H-E-B will premiere of this year's crop of H-E-B commercials, which have a cult following nationwide. The always crowd-pleasing ads will air during the game on KENS5. Tip-off is scheduled for 7 p.m.

The 2015 @HEB Spurs commercials are coming! Tune in to #SASatOKC this Wednesday on @KENS5 for the World Premiere! https://t.co/1puBuTG5dg

Wanna watch the new @HEB Spurs commercials at the game? RT for a chance to win 2 tickets to Friday’s home opener! https://t.co/yb6LwN1yci

Usually, H-E-B produces around four commercials each year, but as we reported earlier, the grocery giant is airing a total of seven commercials this season. The first batch will air for the first time Wednesday night. The rest will air during the Spurs' first home game of the season on Friday night, which will air on Fox Sports Southwest. Friday's game starts at  New Spurs Star LaMarcus Aldridge joins Tim Duncan, Tony Parker, Kawhi Leonard, Manu Ginobili and Patty Mills for this year's ads.

On Friday, you can visit heb.com/spurs to view all seven commercials and vote for your favorite one.

Here's a sneak peek of behind the scenes photos from this year's shoot.

Back in action with the @HEB gang ✊🏾Who's excited to see this years commercials? #classic #comedy #laughsfordays