Here are a few short reviews of movies that will be released at San Antonio theaters, on Netflix and on VOD June 14. 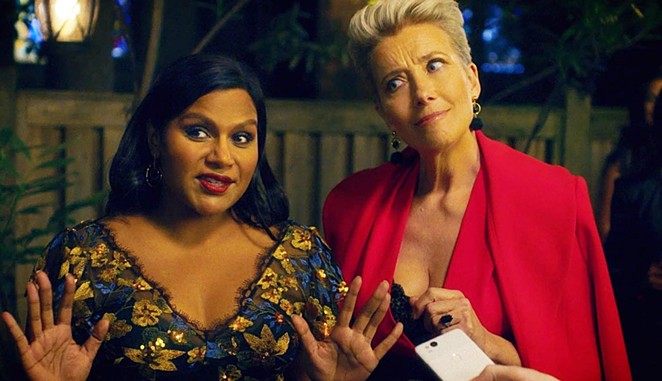 Amazon Studios
From a comedy standpoint, the script that actress/screenwriter Mindy Kaling penned for Late Night is a delight—a smart and playful narrative that is at its best when Kaling and two-time Oscar winner Emma Thompson (Sense and Sensibility) share the screen. It does, however, run into a few problems when it comes to the realistic landscape of late-night TV, which is surprising since Kaling was once an intern on Late Night with Conan O'Brien and is well-versed in the TV industry as a writer on The Mindy Project and The Office. In Late Night, Kaling stars as Molly Patel, a chemical plant worker who wants nothing more than to land a job as a writer for a late-night TV show. Molly gets her opportunity when the industry’s only late-night female host Katherine Newbury (Thompson) demands her producers hire a female writer for the first time in the show’s history. Katherine has just been notified that she is being replaced – after more than 30 years – by a hipper host. To combat the executives’ decision, she decides to reinvent her show to see if she can save her job with the help of Molly, who knows nothing about working in a writers’ room but seems to be the only one with fresh ideas. While Kaling’s script is rife with wittiness and humor, the idea that someone as green as Molly would make her way into a coveted position on a national TV show is highly unlikely, especially in the serendipitous way it plays out. While we’re at it, it’s not very believable that Katherine’s late-night show, with its steady decline in ratings and disregard for the changing TV trends, would have survived for three decades. Based on what Late Night reveals, Katherine would’ve been given the ax years ago. While Thompson is wonderful in her role, the character feels out of place – like it belongs in a whole different movie. Maybe it’s because it models Meryl Streep’s Draconian Miranda Priestly from The Devil Wears Prada too closely. Instead, Katherine should’ve been written as a David Letterman- or Ellen DeGeneres-type of character, not like a British Judy Sheindlin. It’s beyond implausible that someone as austere as Katherine could’ve sustain her high-profile career as a comedian and host for as long as she did. Still, Kaling’s screenplay charms its way out of most of its flubs and receives high marks for confronting an industry-wide issue (the lack of female representation in certain areas of the entertainment world) in such an insightful and funny way. Late Night opens nationwide June 14.
3 stars out of 5 stars

Columbia Pictures
Honestly, what’s the point of rebooting a popular movie franchise after its last installment hit theaters seven years ago, if there’s nothing remotely new or exciting for audiences? Ignore the rhetorical question. The answer is box-office dollars. After 15 years and three films, the sci-fi action comedy trilogy has pulled in more than $1.6 billion worldwide. So, why would anyone mess with what’s proven to be reliable? The answer is because Men in Black’s storytelling has grown stale. It’s not enough to recast the movie with a female co-lead and call it a day. Screenwriters Matt Holloway and Art Marcum, who have shared script duties in the past on projects like Transformers: The Last Knight, Punisher: War Zone and the original Iron Man, seem like they’re in a creative rut. Men in Black: International, which replaces Will Smith and Tommy Lee Jones with Chris Hemsworth (Thor: Ragnarok) and Tessa Thompson (Creed), is a bloated mess with no style, imagination or reason to vaporize alien scum with its stockpile of tri-barrel plasma guns. In the film, Thompson plays Agent M (remember when Michael Jackson wanted to be Agent M in Men in Black 2?), a young woman who has spent her entire life tracking down the mysterious organization known as the MIB after witnessing her parents get “neuralyzed” (they’re memories of alien and MIB activity were wiped clean) when she was a child. When she is finally able to infiltrate the group, she is partnered with the charming Agent H (Hemsworth) and the two are sent on some random extraterrestrial assignment and must later hunt down a sleeper agent in their midst. Battling to save the universe from a generic pair of villains, Hemsworth and Thompson’s lead characters are wasted through dull action scenes, below-average special effects and an obvious twist in the third act that confirms the movie’s overall banality. If anything, Men in Black: International will have many moviegoers wondering what ever happened to that batshit crazy idea the studio once had to produce a Men in Black/21 Jump Street crossover movie with Channing Tatum and Jonah Hill donning the slick MIB suits. Absurd as some might think the idea is, at least it had the potential to be weird and different. Men in Black: International opens nationwide June 14.
2 stars out of 5 stars 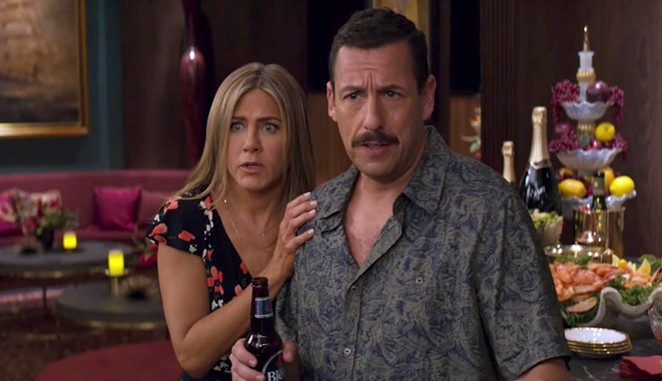 Netflix
Of all the Adam Sandler comedies released on Netflix since 2015 (five in the last five years, not counting The Meyerowitz Stories because – let’s be honest – what devout Billy Madison fan actually sat through the Noah Baumbach dramedy?), Murder Mystery is at the top of the pile. Without revealing what kind of pile we’re referring to, that’s not saying much. Sandler’s contributions to the streaming service have been some of the worst of his cinematic career. From The Ridiculous 6 (zero out of 5 stars) and The Do Over (1 out of 5 stars) to Sandy Wexler (1 out of 5 stars) and The Week of (1.5 out of 5 stars), Sandler’s Netflix output makes Anger Management look like 12 Angry Men. While Murder Mystery is slightly better than the aforementioned Netflix garbage, mostly because Sandler keeps himself grounded, the whodunit comedy doesn’t do Sandler or co-star Jennifer Aniston (We’re the Millers) too many favors. Sandler and Aniston star as Nick and Audrey Spitz, a married couple who are caught up in a murder investigation during their European vacation. Although there is an entire group of people who were at the scene when the murder takes place, Nick and Audrey, the only Americans at the party, are forced to prove their innocence when they become the prime suspects. Far less enjoyable than other crime-inspired comedies like 2001’s Gosford Park, 2005’s Kiss Kiss Bang Bang and even something as silly as 1985’s Clue, Murder Mystery is annoying and lazily written by James Vanderbilt (Independence Day: Resurgence). Sandler and Aniston have some good comedic timing with one another, but those few scenes that actually click can’t make up for the script’s worn out formula. Murder Mystery debuts on Netflix June 14.
2 stars out of 5 stars 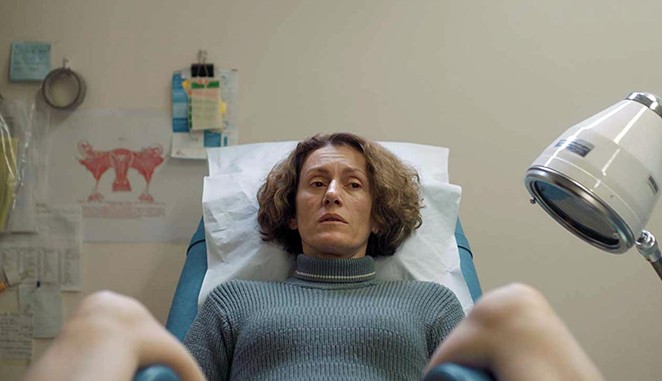 Subliminal Films
Middle-aged housewife Elpida Agapiou (Stella Fyrogeni, or the Greek Frances McDormand) has started menopause. “Symptoms are more or less normal for someone of your age,” her doctor tells her before running through a laundry list of things she may experience – from vaginal dryness to mood disorders to itchy skin. It’s news she takes in stride. Her life is such a bore, at least itchy skin will give her something to do. Elpida’s daily routine consists of cleaning the house, cooking and tending to her fat, helpless and inconsiderate husband Costas (Andreas Vasileiou). Elpida is overworked, resentful and sexually frustrated. She begins to fantasize about what it would be like to stand up for herself. Her thoughts are harmless at first (cutting Costas’ TV cord when he plays the soccer game too loud) but they soon turn into more hostile daydreams when he decides to sell her car, her only possession that made her feel truly independent. Directed by first-time feature filmmaker Tonia Mishiali, Pause is a darkly funny, clever and sad character study of a woman trapped in a life she does not want and pushed to the breaking point. Mishiali’s confident direction and Fyrogeni’s subtle and genuine performance are impressive. Pause is a foreign-language film from Greece, but the themes of isolation and the desire to feel love and respected are universal. If an independent Hollywood studio ever decided to remake it for American audiences, it’s a guarantee that the best actresses in their 50s would lobby hard for the role. It’s that good, and Fyrogeni gives it depth and nuance to make it come alive in some very surprising ways. Pause hits VOD platforms June 14.
3.5 stars out of 5 stars