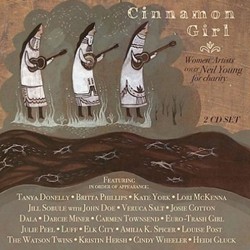 The covered tunes are the usual suspects: “Ohio” (twice), “Heart of Gold,” “Helpless,” “The Needle and the Damage Done,” “Like A Hurricane,” etc. After all, Young’s catalog is deep enough to support a box set without exhausting the “A” list of available material. And while his songs have received their fair share of decent covers over the years, no one’s ever stolen a tune from him the way, say, Hendrix walked off with Dylan’s “All Along the Watchtower.” And no one’s likely to in the future.

Tunes rich in traditional songcraft, like “Only Love Can Break Your Heart,” are best heard in Young’s sketchy, broken-hearted whine. But that should never stop one from trying. Amilia K. Spicer does “Heart” no disservice here, while Dala’s piano ballad version of “Ohio” mutes the song’s rage in favor of illuminating its haunting melody. In fact, nothing here makes me want to throw bricks at the stereo, unlike, say, an emo collection of Bob Dylan songs that once dared physical retribution.

If anything, the overall prettiness causes a vague numbness — although the Watson Twins’ super-restrained “Powderfinger” defies all odds and clicks. Lori McKenna’s “The Needle and the Damage Done,” however, shouldn’t be this soothing, while Britta Phillips virtually disappears in the Mazzy Star-like reverb and gentility of “I Am A Child.” Then again, Kristin Hersh uses an otherworldly sphere to spike up “Like A Hurricane,” and Heidi Gluck maintains a substantial kick for “Walk On.”

So, is it the singer or the song? More like a case-by-case basis and the results are as unpredictable as Neil himself.