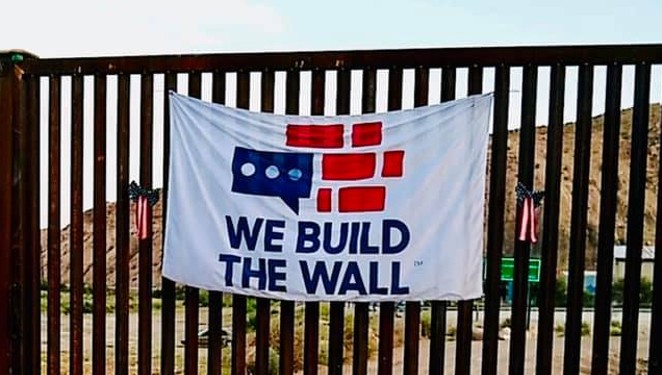 Twitter / @WeBuildtheWall
After prosecutors indicted former Trump advisor Steve Bannon on fraud charges, the ACLU of Texas is demanding the White House turn over information clarifying its relationship with the alleged scheme.

Yesterday, the U.S. Attorney's Office for the Southern District of New York charged Bannon and three others with misusing funds raised by We Build the Wall, a private group promising to build a wall along the U.S.-Mexico border like the one President Trump has called for.

"Multiple Trump administration officials publicly endorsed We Build the Wall, and the Department of Homeland Security, at the urging of President Trump, even awarded a $400 million contract to a company affiliated with the group," ACLU Texas Legal Director Andre Segura said in a statement.

In December, North Dakota-based Fisher Sand and Gravel — a company that President Trump urged military officials to hire for work on the wall — received a $400 million federal contract to build part of the barrier through an Arizona wildlife refuge.

Late last year, the ACLU of Texas filed a Freedom of Information Act Request with the Department of Homeland Security seeking information about the federal government's relationship and dealings with We Build the Wall.

"But when we demanded answers about the administration's relationship with this group, we got nine months of silence," Segura said. "The Department of Homeland Security must immediately turn over all records accounting for its suspicious dealings with We Build the Wall."

The ACLU has also detailed its probe into the murky relationship between the Trump White House and We Build the Wall in a December 20 blog post.