Civil Attorney From Mexico Moves To SA For The Arts 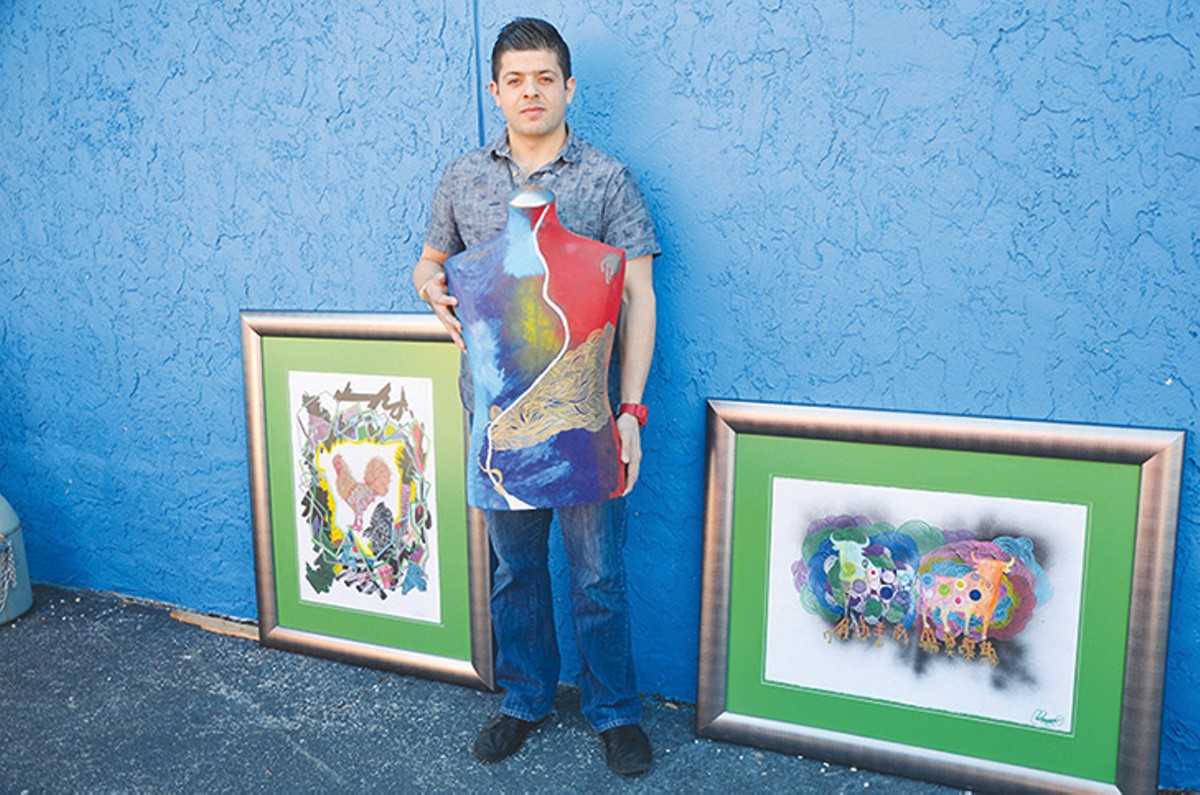 Carlos Guerrero learned his craft from a well-known border artist, not a university. Photo by Bryan Rindfuss

Carlos Guerrero is like a lot of creative types from the Rio Grande Valley. He moved to San Antonio in search of a better life — as an artist.

He's from Matamoros, a border city in Tamaulipas, Mexico, across the Rio Grande from Brownsville.

Guerrero is following his passion. He's been in the Alamo City for five months and is getting by as a cook at a North Side restaurant.

"Well, it took me like five years to make this decision, because I was not sure," he says. "OK, I have my day job as a lawyer. On the weekends I want to be an artist. And you cannot sell anything over there."

He uses oil and acrylic paints, and paint markers to create vibrantly colored images of animals fused with geometric shapes and patterns, playing with lines and structure as he finds his way through compositions.

"I don't really think I have a defined style. I get bored if I'm not trying new stuff and learning new techniques all the time," Guerrero says. "My artwork is a constant journey of discovery for me, and I think the central idea behind my work is constant evolution."

One of his go-to animals to illustrate, however, is the bull.

"For me, it is such a precious animal," Guerrero says. "One of the things that manifests in my art, is I don't like the killing of the bulls they do in Spain."

Guerrero, who never attended college to study the arts, was lucky as a child. His mother encouraged his creativity.

"We were three children — one-year difference in each of us. We were like a storm for her. We were very hyper," he says. "The one thing my mom did, is she put us in the art [sic], the three of us, so she could have a rest for two or three hours and we can go crazy doing art. And we did, for 10 or 11 years."

"Well, where I live, he is a famous painter in my city. My mom used to sell his art because my mom is an art lover, and he would teach us," Guerrero says.

Quintana's influence on Guerrero is apparent when listening to him speak about his teacher. And a quote from a June RGV Beyond Arts Magazine story about a show at the Harlingen Arts and Heritage Museum sheds light into Guerrero's big leap to follow his work as an artist in San Antonio.

"Nobody chooses to be an artist, for art is a calling; a vocation. But art cannot be rushed. Nobody should expect instant success, for a college degree is only a license to initiate the process of maturing skill," Quintana said during an interview with the magazine.

The other big take-away from Quintana for Guerrero is how he goes about creating a composition.

"My teacher once said, 'Whatever you put there is whatever you are feeling inside, just go with it,'" Guerrero says.

And he certainly does.

"If I am stressed or I have problems, instead of doing something stupid, I go grab my paintings and just start to draw and paint," he says. "And I go with whatever emotion it will let me out on. If I get frustrated or stressed, I just start to draw."

That's one side of it, but the other is that Guerrero says he is a "hyper" person, and there are just so many different ways to create art, which fits well into his method.

"He [Quintana] told me there's a thousand ways to do paintings, but it's your time of expression," he says.

While he hasn't been in San Antonio long, his decision to pursue a future north of the border has already bloomed a positive for his artistic endeavors.

"I had [my first show] at the Pipe Corner at South Alamo Street. It went good," Guerrero says. "I sold two paintings. That was my first exhibition ever."

Guerrero says he plans to continue trying to show his paintings and will ultimately pursue a law degree so he can practice in the states.