Send a News Tip
Update 9/22: The story has been edited to include a statement from Codeup CEO Jason Straughan.

A local coding company is under fire after a San Antonio man took to Facebook to share his frustrations with the company's advertising.

Facebook user Walt E. Perry Sr. shared a photo of a Codeup billboard that had a picture of a woman, Sukari S., and the words "Hair Stylist" crossed out.

Here's what Perry had to say about the billboard:


Took a picture of this billboard off I-35/Walzem Rd...
Whoever is in charge of Marketing and promotion should be replaced. This is clearly stereotyping and misleading information. I showed my wife who's been a LICENSED COSMETOLOGIST for almost 20yrs and she didn't like it either. Geesh! Talk about "Coding Up"! So I guess doing hair isn't a REAL job. :/
Don't "(Color)Code Up"...#SUITUP 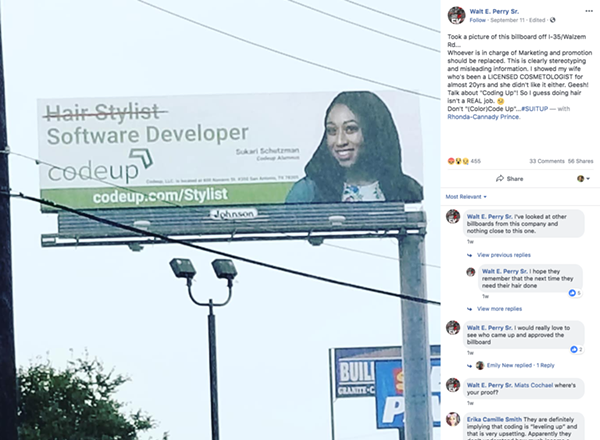 Others agreed that Codeup was snubbing hair stylists and suggesting that cosmetology was not an adequate profession.
The "TAKE THAT BILLBOARD DOWN!!!!" petition on Change.org called for 1,000 signatures and is nearing 800.

The company did indeed take the billboard down, but not due to online outrage.

"These billboards are rotation. It came down as scheduled. The local TV news was duped into believing this story, but that statement is pure fabrication," said CEO Jason Straughan.

Codeup has since responded to the criticism, saying that they didn't mean to upset or offend anyone. Instead, the company said they were just trying to encourage individuals of any background to venture into software development.