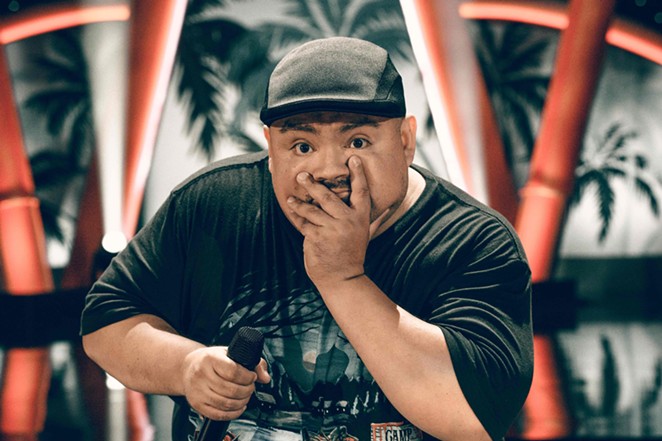 Netflix
Funnyman Iglesias says residencies such as the one he’s doing in San Antonio typically take place only in Las Vegas or Atlantic City.

For comedian Gabriel “Fluffy” Iglesias, 2020 felt like he was under house arrest.

With no live shows for more a year, he waited for someone like Dr. Anthony Fauci — the comic calls him “Dr. Foochi” — to come on TV and tell him what the next steps were and to listen for any hints about when he could get back in front of a live audience.

“I’ve never taken a vacation, and I never take breaks,” Iglesias told the Current during a recent interview. “I come from that mentality that if you stop working, someone’s going to take your job. I didn’t even have the option of going out of the country because the whole planet was shut down.”

It turns out when you’re one of the most popular comedians on said planet, job security isn’t something you really have to worry about. On his first leg of his 2021 tour, Iglesias has made his way to San Antonio, where he started a nearly one-month stand at the Tobin Center for the Performing Arts. The run kicked off June 23, and he’s performing there until July 17. During his time in San Antonio, he will record a new Netflix comedy special. He did his previous special, One Show Fits All, for the streaming service in 2019.

During the interview, Iglesias talked about what it’s been like being stuck at home for the past year, why he would never create an OnlyFans page and what he hopes fans bring him if they end up going to his July 15 show, which falls on his 45th birthday.

It’s one thing to make a comedy tour stop for a weekend or even a couple of weeks in one city, but you’ll be in San Antonio for almost a month. Are the tacos at Garcia’s — your favorite Alamo City Mexican restaurant — that badass?

(Laughs.) Nice. You know what, they really are. I wish they would expand their business. I’ve actually talked to them about possibly investing or doing something, but they’re trying to keep their business very much in-house. The quality is amazing. That place is in the ‘hood. I’m still willing to risk the safety of the people with me and the cars they are driving to eat there.

But in all seriousness, a comedian staying in one city for almost a month is pretty unique, right?

It only happens in Las Vegas or Atlantic City, where entertainers will do residencies. When the idea of going back to doing standup [post-COVID-19] came up, we thought, “Where do we kick this thing off?” Then, of course, you have to take under consideration what places are open. Clearly, Florida doesn’t care … and Texas is right behind them. It’s no secret that San Antonio is one of my favorite cities, if not the favorite city outside of being home.

Have they named a plate after you at Garcia’s yet? Fluffy’s Flautas Special, maybe?

Hey, you know, they’ve got plenty of things that are fluffy there already. But I’d be honored if they did name something after me.

During 2020, how did you get that immediate fix that most comedians need from a live audience? Was there a way to fill that void?

Alcohol and throwing fits. I had to find other things to do. I’m really strong with my social media, so I just interacted with people that way. I didn’t want to do any virtual shows because no. I didn’t sign up for an OnlyFans account. I’m a comic. I need people in front of me. I’m not going to talk to my computer screen and try to entertain people. That’s not a comedy show to me. The new generation of comics might disagree. But I still need people and a microphone and a stage. That’s what I’m good at, so that’s what I’m going to stick to.

But you do know how much Cardi B is making from her OnlyFans channel, right?

That’s Cardi B. I’ve got some impressive features myself, but no one needs to see that.

Courtesy of Gabriel Iglesias
"I still need people and a microphone and a stage," Iglesias says of his decision not to perform any virtual shows.
Besides not being able to perform, what was the most difficult part of the pandemic for you?

Adjusting to it and the unknown part. If you break your leg, you can mentally prepare for the things you’ll be able to do as you get better. But [with the pandemic], we didn’t know. It started off like, “Ah, it’s only going to be two weeks.” My manager and agent kept trying to plan, but I was like, “How are you going to plan? We don’t know! Might as well schedule the moon while you’re at it.” Not knowing when we could plan something, that was very frustrating.

In your last comedy special, One Show Fits All for Netflix, you mentioned how your son Frankie, who was around 21 at the time, likes watching videos of other people playing video games. So does my four-year-old son. Are you saying I have at least 17 more years of this?

Who knows where we’re going to be and what the technology is going to offer? I came from a time of having a Walkman and a Game Boy. But now, you’re dealing with virtual reality, and people making money and winning cars playing video games. Back when I was doing it, my mom was like, “Stop doing it, you’re wasting your time!” If you can win a car playing video games, I’m pushing my kid to play video games too.

You’ve embraced social media, but not Switch yet. Why not?

I don’t play video games, so that one is probably not for me. I know that other entertainers are using that platform to get their stuff out there. I have a friend who’s a DJ who started going live on that platform. As a comedian, I have to stick to what I can engage with the most. It was a big stretch for me to start doing TikTok, which I feel is a very young social media [platform]. I thought when Snapchat came out, I was done. I told all my friends, “Anybody that’s doing Snapchat, we don’t need to be hanging out.” But TikTok, man. JLo’s on it. Shakira’s on it. I’m like, “Yeah, I can make stupid videos too.” I had no idea how crazy that media platform was. It surpassed all my other platforms.

What’s the last video game that you played?

I actually played the new Mortal Kombat — the one that requires you to take a tutorial to learn all the moves. We come from a time when there were two buttons [on a game controller]. There was an A and a B. Then, the Super NES came out and there were four. Now, there’s more buttons than you have fingers.

Before I forget, you’re going to be turning 45 when you’re here in San Antonio — July 15. What do you want for your birthday?

Regalos (gifts). They can hook it up with gift cards from Garcia’s or Mi Tierra. I’m not hard to shop for. Gift cards. I’ll use them. Starbucks. Dunkin’ Donuts. Shit, H-E-B. Just give me some gift cards!