Coronavirus Test Results in Texas Are Taking up to 10 Days 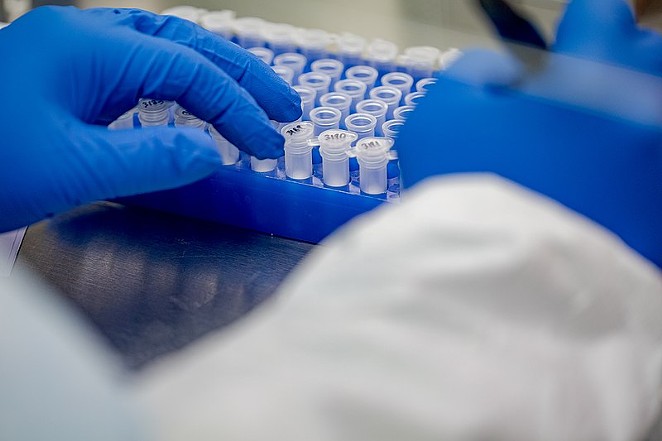 Wikimedia Commons / governortomwolf
A lab worker tests samples for coronavirus.
At first Chris Woodruff thought it was a routine asthma attack. But when the North Texas businessman started running a fever, he moved out of the house and eventually got tested for COVID-19, the disease caused by the new coronavirus.

Last week, he got his results back — positive — and went on “extreme” lockdown as doctors instructed.

But it took 10 days to get the results.

Woodruff, now recovering, is far from alone. Though Texas has dramatically increased its testing capacity, many who have been tested are waiting days on end for the results, and sometimes a week or more, according to interviews with patients and health care professionals. Those delays, along with the relatively low number of tests conducted so far, mean no one really knows the true picture of the coronavirus spread in Texas, and patients aren’t getting the timely information they need to respond accordingly, patients and experts say.

In addition, Texans might not take isolating themselves seriously — or their friends and family might not take extreme precautions — until they have confirmation of a positive case.

“As long as there are these lags with testing, we're not going to know the actual numbers, and I'm worried that there's a tendency to underestimate the severity of the epidemic — pandemic at this point,” said Dr. Shelley Payne, director of the University of Texas at Austin's LaMontagne Center for Infectious Disease.

Testing is done by health care facilities, commercial and public laboratories, making it difficult to know how common cases like Woodruff’s are. State authorities say the time it takes to get results depends on which lab a patient’s test went to, and, for private laboratories, where they’re located.

As tests have surged nationally, federal officials have acknowledged possible shortages of materials like swabs and reagents that health care providers and technicians require. Even the private labs that process a majority of Texas cases have suggested there may be delays triggered by the surge in demand.

“We cannot accommodate everyone who wants testing and meet tight turnaround time expectations,” said Quest Diagnostics, a commercial lab behemoth, in an online statement. The company’s ability to “rapidly” expand capacity is being outpaced by demand, the statement said, and supplies for COVID-19 testing are a “global industry- and government-wide issue.”

Testing for the novel coronavirus had a botched rollout that included problems with test kits and the U.S. declining to use an existing World Health Organization test. Private labs were initially side-lined, and hard-hit states like New York and California were a bigger priority than Texas, state officials say.

The number of tests in Texas has leapt to at least 25,260 as of Saturday, a ten-fold increase from the week before, and a newly authorized test could soon deliver test results in as little as five minutes.

State authorities downplayed the effect test results could have on the state’s preparedness and response to the outbreak.

Texas currently lags some 35 other states in the number of tests it’s recorded relative to its population of 29 million, according to a New York Times analysis of estimates from the COVID Tracking Project. New York, with 19.5 million people, had recorded 122,104 tests as of Friday.

In mid-March, when Woodruff was tested in Granbury, tests were scarcer in Texas than they are now. In fact, that same day the Texas governor announced, amid rising protests over a lack of testing capacity, that Texas would see an exponential increase.

Woodruff had been on an extended road trip for work — in Las Vegas and Hawaii — and returned to Texas on March 1. He started feeling sick about a week later.

Though he had most of the classic COVID-19 symptoms — fever, chills, shortness of breath, a dry cough — Woodruff thought it was probably the flu. Still, he felt bad enough to go to an emergency clinic on March 16. When his flu test came back negative, he was instructed to go immediately to a brand new drive-thru testing site nearby.

They told him he was one of the first people in his small North Texas county to get the test, Woodruff said. It wasn’t until March 26, 10 days later, that he found out he had COVID-19 after all. Woodruff was already staying away from his family and avoiding other people, but he was still driving and visiting his ranch.

“Was it as extreme as I am today? No, because I didn't know,” Woodruff said. “It would be great to get (the results) sooner. Absolutely. Everybody would admit to that.”

His wife, Annette, said they figured he had come down with the flu — which their kids had already experienced — and they weren’t all that concerned.

“But if we'd have known that it was corona, we probably would have been a lot more careful around him before the fact,” she said.

Chris Woodruff applauded public health authorities in Texas and Washington for their response to the quickly spreading disease, and said he hopes people will panic less after learning how he contracted and then overcame COVID-19. He said most Texans are recovering, but people aren't necessarily getting that message.

“I went through it. Yeah, I had a tough time breathing. Yes, I had a fever for eight days, 10 days. I went through it and apparently I’m going to be fine, but where’s my number? I want to see (the) number … of us that are getting through it. That’s the hope that people need to understand and see.”

While confirmed cases like Woodruff’s are added to the total number of Texans who have come down with COVID-19, the long lag time means that the data disseminated to health care providers, government leaders and the general public is out of date.

That not only makes it difficult for epidemiologists combating the disease to quickly access the accurate information they need to understand how the virus is spreading, but also can complicate the job of medical professionals across the health care system.

It’s “critically important for the treating physician to be able to know what's going on in that patient that is laying down in a hospital bed in front of him or her, and to know it as quickly as possible so that they can make the needed changes in therapy or attention or focus and get them better,” said Dennis Perrotta, a retired state epidemiologist.

Case in point: a 17-year-old cancer patient who needs chemotherapy to combat aggressive bone cancer but was told to wait for the results of his COVID-19 test. Nine days later, he was still waiting, according to NBC News.

Gaven is 17. He needs surgery & chemo ASAP to kill the cancer spreading unchecked through his body.

But he had a fever last week, so doctors wanted him tested for COVID-19 first.

He’s still waiting for the results.https://t.co/kjrSSscCFj

Gov. Greg Abbott said Thursday that Texas is “administering every test that we get,” and was on a "very good trajectory in the increase of the number of people we are testing and I expect that increase to continue."

“While test results are important for overall surveillance, they don’t have a significant effect on preparedness and response activities or the medical treatment of individual patients,” Anton said.

The rapid ramp-up in testing and a shortage in needed supplies have been blamed for testing backlogs across the country.

“It takes time to gear up for” testing on this scale, said Payne, the UT infectious disease expert. “I think that there was a sense that we weren’t at such a high risk when the first cases appeared in the U.S., and we didn’t start [to prepare for wide scale testing] at the time. So now, everyone is scrambling to get all of the reagents, the tools that are needed, and to make sure people have the proper protective equipment” when testing.

Neither LabCorp nor the state said they are not running short on supplies. The Texas lab has ordered swabs and reagents, received “partial shipments,” and has enough supplies to test for a few weeks,” Anton said.

She did not provide a specific timeframe in which test results are returned. Texas’ 10 public health labs can together analyze close to 700 “specimens” a day, Anton said, and prioritize high-need patients and those who “will tell us the most from a public health perspective about what’s going on with the outbreak in Texas.” That includes people who have a doctor’s order, COVID-19-like symptoms, and either require hospitalization, are at high-risk of serious illness or have traveled from a country rampant with the virus.

Quest pegged its test turnaround time at 4-5 days on average, but said it can vary across the country, ranging from “a day or two” to “about a week from specimen pickup” elsewhere.

A LabCorp spokesperson said patients receive their test results in 4-5 days, on average, after the “specimen” is picked up for testing. The time frame can “vary based on demand,” depending on how long it takes to transport the sample to LabCorp’s test facilities and the order in which patients are prioritized, said spokesperson Mike Geller.

Amy Sanders, a UT-Austin associate professor, said she was tested on Monday, after running a low-grade fever for days, receiving negative flu tests and returning “curiosities” with her vital signs.

A health care provider outfitted with a plastic face shield administered the test, an uncomfortable swab that scraped the inside of her nose, and then told her, “the labs that can process these tests are backed up. So it will likely be 7-10 days before we have a test result for you.”

Sanders was self-isolating at home and still waiting as of late this week.

“The governor made lots of promises a week ago about ramping up testing, and ramping up testing is important,” she said, “but if it takes someone seven to 10 days to get results, we're never going to have an accurate picture.”

Disclosure: The University of Texas at Austin and Quest Diagnostics have been financial supporters of The Texas Tribune, a nonprofit, nonpartisan news organization that is funded in part by donations from members, foundations and corporate sponsors. Financial supporters play no role in the Tribune's journalism. Find a complete list of them here.