Cosby Lindquist, My Little Taco House (Night)
At a time when many San Antonians are cringing over the thought of a plexiglass wall surrounding Alamo Plaza (wouldn’t that be fun to clean?) and other bizarre missteps in Philadelphia-based Preservation Design Partnership’s “Master Plan” promising to “Reimagine the Alamo” (subtitle: “A New Vision for Sacred Ground”), artist Cosby Lindquist’s small but powerful FL!GHT Gallery exhibition “Not Much Larger Than a Taco Bell” looks and feels especially relevant. Although it doesn’t directly reference the highly controversial, $450 million plan City Council unanimously approved on May 11, Lindquist’s ongoing photographic series does in fact “Reimagine the Alamo” by depicting an eclectic assortment of establishments modeled after our iconic “Shrine of Texas Liberty.”
click to enlarge

Cosby Lindquist, Many Pawn and Jewelry
An Ohio native who teaches photography, lighting and Photoshop at both the Art Institute of San Antonio and The Camera Exchange, Lindquist moved here with admitted “preconceived ideas about Texas” and rightly assumed he’d find “numerous buildings that look like the Alamo” across the Lone Star State. Since scouting his first location (Alamo Federal Credit Union off Interstate 10), Lindquist has relied on tips from friends, Google Maps, online discussion threads and forums dedicated to the Alamo (and John Wayne) to track down additional Alamo-inspired sites.

Cosby Lindquist, Alamo Custom & Collision
Often captured on Sunday mornings, these images are curiously devoid of humans and vehicles, which gives them a cinematic, even painterly quality and also magnifies odd characteristics — decorative cannons flank the entrance of Alamo Custom & Collision; Alamo Mobility boasts a thoughtful abundance of handicap parking; Many Pawn & Jewelry retains signage from former occupants the Robert Gentry Museum and Sweet Dreams Publishing Co.; and My Little Taco House (renamed PapaGayos for its appearance in the 1997 biopic Selena) looks as if its Alamo theme was something of an afterthought based on a makeshift add-on parked on top of the building. 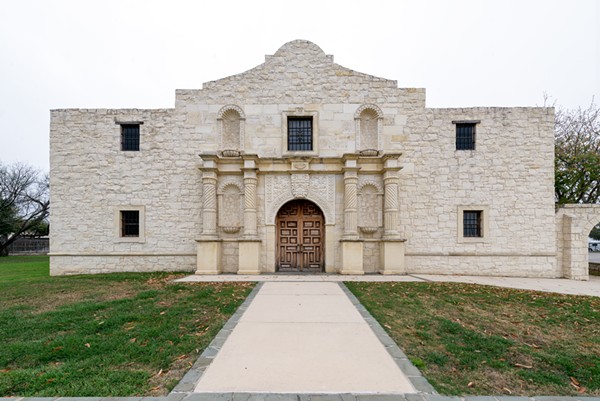 Cosby Lindquist, Alamo Federal Credit Union
Still actively working on the project, Lindquist hopes collectors will snap up his 13” x 19” prints ($400 unframed, $500 framed and mounted) to help fund trips to photograph other locations on his radar (in El Paso, Dallas and Laredo). Best known as the set for John Wayne’s 1960 movie The Alamo, the former tourist attraction Alamo Village in Brackettville remains a “white whale” for Lindquist. “It’s impossible to access without permission and the area is crawling with border patrol,” Lindquist told us. “If anyone knows the owners and can get me in, let me know!”
click to enlarge Cosby Lindquist, Kwick Kopy Headquarters
Offering a humorous and telling complement to these photos are framed tourist “reviews” of the Alamo that Lindquist “plucked” from the internet. “I was really fascinated by the way people compared their expectations with reality,” Lindquist said. “It’s humorous how people describe their disappointment. I don’t really understand how people can leave a review for a historical site like it’s a restaurant on Yelp.” While one reviewer found the Alamo to be “nothing special … literally a small, beat-up building made of sand and rock,” another critiqued its size, claiming “It’s small and can be viewed in minutes. It looks like a Taco Bell restaurant” (hence the exhibition title).
When it comes to the looming Alamo “Master Plan,” Lindquist is not a fan. “While the current layout might not be perfect, the new plan removes the communal aspect of the space,” he said. “The space is used as the community sees fit, and that includes everything from selling ice cream, panhandling, preaching, and protest. I think the walls will do a lot to curtail freedom of speech.”
click to enlarge Cosby Lindquist, Factor Paintball
FL!GHT Gallery’s “senior creative co-conspirator” Ed Saavedra also has thoughts on the matter that will likely be voiced during a gallery talk with Lindquist scheduled for Wednesday, June 14. “Only a few weeks ago, despite widespread heterogeneous opposition, City Council unanimously shoved the ‘Reimagine the Alamo’ boondoggle one step closer to its nightmarish reality,” Saavedra told us. “The ‘Master Plan’ still calls for the removal of centenarian live oak and anacua trees from what doubles as the state’s number one tourist attraction as well as our city’s premier public civic space. But if we piss away tens of millions to evict the First Amendment from the Plaza — and permit carpetbagger consultants and short-sighted politicians to ruin our weird little Alamo — at least Cosby Lindquist knows where we can find more.”