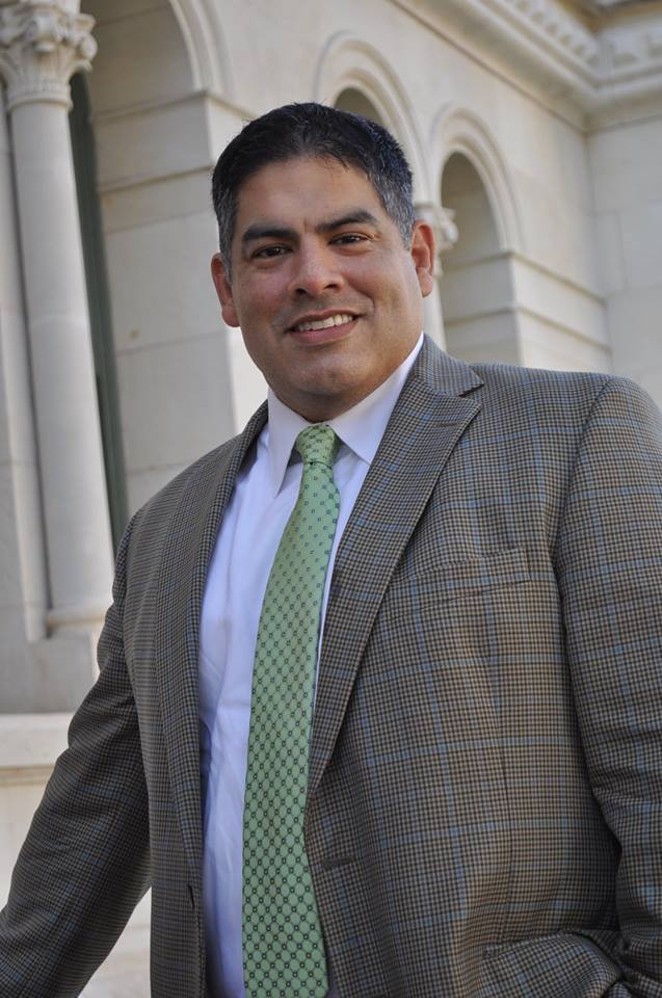 Courtesy
Editor's Note: The following is Their Town, a column of opinion and analysis.

Councilman Manny Pelaez doesn’t put much effort into hiding his feelings, and he has a strong one about Michael Amezquita, head of the Bexar County Appraisal District.

“It’s annoying how smug this guy is,” Pelaez said. “Every time you raise a concern, his response is, ‘If you want something changed, go to the state.’ His attitude is, ‘You can kiss my ass.’”

Amezquita cultivates a tough-minded, no-nonsense persona – especially when he’s addressing politicians – and talks about his job in black-and-white terms. “My job is to see that there’s parity, that everybody’s appraised at market value,” he said. “My job is spelled out in state law. I don’t have a choice.”

Pelaez and Amezquita publicly clashed in February – on Valentine’s Day – over how the district calculates property values. The District 8 councilman didn’t let it go after the city council meeting. Two weeks ago, he won the support of council’s governance committee for an examination of BCAD’s property valuation practices and how they affect economic development and the city’s affordable-housing crunch.

Part of what has Pelaez so worked up is that residents are complaining to his office about hikes in their property appraisals, which mean bigger tax bills. Overall, the taxable value of properties throughout San Antonio jumped this year by 9.2 percent, according to BCAD. The year before, the increase was 8.3 percent.

The city takes in about 22 percent of all property tax dollars collected in Bexar County, compared to 48 percent for public schools.

“For every single city and county official, there isn’t a week that passes where a constituent doesn’t call and say, ‘I got screwed over by BCAD again. What are you guys doing about it?’” Pelaez said.

The answer is very little. The appraisal district has a six-member board of directors, including city, county and school district appointees, with the power to hire and fire the chief appraiser and to set BCAD’s budget. But directors don’t have a say over how homes and business buildings are appraised.
Which is fine. Honestly, would you really trust politicians to fairly and accurately determine property values if they had the power?

But with BCAD set up as it is, council members are in a bind. Many of their constituents are angry and assume their council reps have the political muscle to make the process, in their view, fairer. They don’t.

What politicians do have is the power to put public pressure on Amezquita, which is Pelaez’s prime objective in pursuing a city examination of BCAD’s work.

One of his beefs is with the district’s taste for court fights.

Between 2012 and 2016, BCAD was sued 3,850 times over high property valuations, according to statistics provided by Pelaez’s office. The district settled 49 percent of those cases. That might sound like a lot, but not compared to settlement rates in Dallas and Harris counties – 92 percent and 88 percent, respectively.

Since appraisal districts in general have a terrible record at trial, Pelaez questions why BCAD fights it out so much in court, running up legal expenses on cases it’ll probably lose and accepting judgments that are harsher than the settlements it could have negotiated.

Pelaez also blames BCAD for frequently over-doing it on property appraisals. He cites how much commercial property owners and homeowners succeeded in lopping off their 2015 valuations – $1.6 billion and $475 million, respectively.
What is Pelaez’s endgame?

“To bring BCAD in line with other counties where property owners aren’t getting fucked as often,” he said.

Pelaez has garnered letters of support from the San Antonio Manufacturers Association, San Antonio Restaurant Association, North San Antonio Chamber of Commerce, neighborhood organizations and others. Mayor Ron Nirenberg, who chairs the governance committee, voted for his push for an examination of BCAD.

He shrugged off the litigation numbers that Pelaez referred to, calling them self-reported, statistically meaningless snapshots. “The notion that the settlement rate is indicative of anything is silly,” he said.

The bigger issue for Amezquita is San Antonio’s torrid real-estate market. Existing-home sales – which usually push up the values of neighboring properties – recently hit yet another all-time high. Referring to a house on Mistletoe Avenue that originally sold for about $60,000, Amezquita said, “I can’t help that this [property’s] market value is now $600,000… We follow the market.”

He also said he welcomes the city examination, noting his office has already passed muster with the Texas comptroller’s office.

Amezquita then got in his own dig.

Elected officials, he said dryly, always have the option to slash property tax rates if they feel their constituents are overburdened – leaving local government with less money to spend.