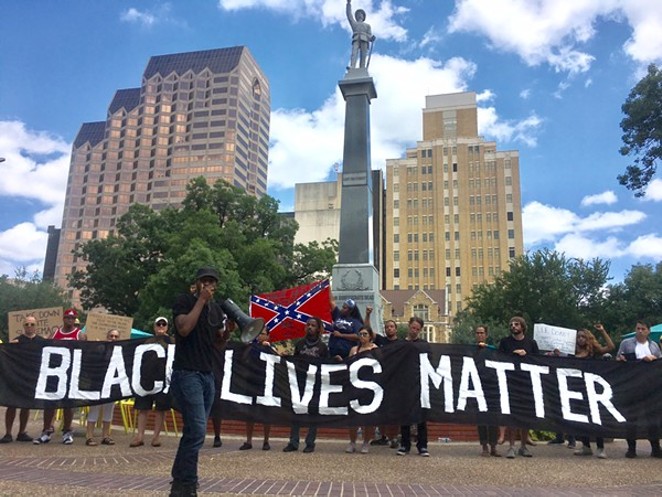 Michael Barajas
The San Antonio City Council's return from its month-long July recess was jump-started Monday with a somewhat controversial policy request.
Councilmen Roberto Treviño and Cruz Shaw filed a Council Consideration Request (a document recommending a new city policy) to move the Travis Park Confederate monument to a new location. The councilmen asked that a committee – consisting of community members and various city boards, like the Office of Historic Preservation – choose where to relocate the monument.

The city's Confederate monument has been a hotly contested topic for years with some saying that moving the monument erases Texas history, while others believe that the statue reflects a history of racism and exclusion. Activists say this recent call to remove the statue was inspired by New Orleans' recent removal of every Confederate statue.

“The relocation of this monument is not an attempt to wash away the hard truths of our history, but rather to ensure that our diverse array of citizens and tourists can enjoy Travis Park, one of the city's most prominent parks," Treviño said in a Monday press release from the city.

The councilmen said the figure should be moved into an area that integrates educational context, such as a museum. Local grassroots organization, SATX4, which works to expose systemic racial injustices, says that the "history of white power belongs in a museum, not in the heart of our city." Shaw says that relocating the monument from its downtown location will ensure that the city's public spaces are inclusive for all.

“Context is key when it comes to our history, so relocating this statue to a space more fitting to educate the community is a step in the right direction," Shaw said in the city's statement.

Activists told the Current in early July that they hoped the appointment of Mayor Ron Nirenberg would help green-light the relocation. Previous Mayor Ivy Taylor was not supportive of moving the monument saying that doing so would ignore the historic struggles of minorities in the nation. Nirenberg, however, has taken a different approach, saying that Confederate monuments and statues — that are not placed in proper historical context — glorify slavery.

The official request to move the 118-year-old monument has sparked plans for protests. The Texas Freedom Force, a group that believes moving the monument erases the state's history, is planning to rally at Travis Park on August 12. SATX4 has planned "No Hate, No Fear" a counter protest that will continue to petition for the removal of the statue. The city council is expected to hear the proposal as soon as next week.