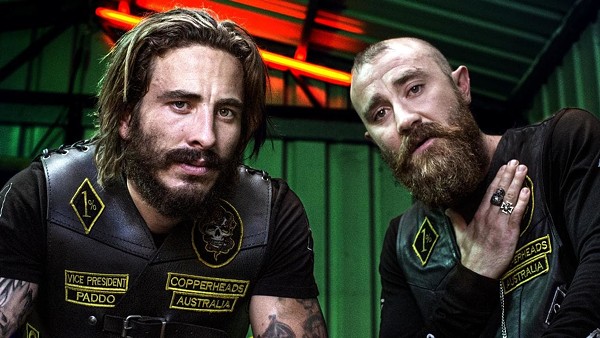 It’s taken two years for the Australian biker flick Outlaws to find its way out of cinematic limbo after debuting at the Toronto Film Festival in 2017 to little fanfare. Still, independent studio A24, whose track record has been mostly phenomenal since forming more than six years ago, picked up Outlaws’ distribution rights for a limited theatrical release and what basically looks to be a discreet video-on-demand dump this week.

Although A24’s catalog in the last few years has included award-winning films like Moonlight, The Florida Project and First Reformed, the indie company does have a handful of unwatchable flops like Sea of Trees and Woodshock. Unfortunately, Outlaws fits in nicely with those latter two titles. It’s an amateur attempt at making a gritty, testosterone-infused thriller that ultimately implodes because of how serious it wants to be considered.

Originally titled 1% — a term used to describe the percentage of bikers who are not law-abiding citizens — Outlaws tells the story of a power struggle taking place inside the ranks of a criminal biker gang known as the Copperheads. After three years behind bars, Knuck (Matt Nable, who is also the film’s screenwriter) returns to his motorcycle club to reclaim his role as president. He gets enraged when he learns his temporary replacement Paddo (Ryan Corr) has been plotting to get the club to go into business with a rival gang.

When the Copperheads renege on the deal, Paddo becomes scared for his life and the lives of his girlfriend Katrina (Abbey Lee) and his slow-witted brother Skink (Josh McConville). With a competing gang leader breathing down his neck, Paddo must decide if he should overthrow Knuck and take back the throne before things become a biker bloodbath.

Directed by first-time filmmaker Stephen McCallum, Outlaws plays out like a really bad, ultra-violent and sexed-up episode of the popular motorcycle drama Sons of Anarchy. It also feels like screenwriter Nable wrote his script after reading John Steinbeck’s 1937 novella Of Mice and Men and chose to adapt some of the obvious themes into a world far removed from it. The final product isn’t impressive, however, when the screenplay is a stereotypical and senseless exercise — one that Nable seems to have thrown together without much thought about dialogue or characterizations.

If Nabel and McCallum tried to do what writer/director S. Craig Zahler did with two of his films, 2015’s Bone Tomahawk and 2017’s Brawl in Cell Block 99, and simply made ridiculous but fun grindhouse trash, maybe Outlaws could’ve found something to latch onto. Instead, it aims for the level of another Australian film, 2010’s remarkable thriller Animal Kingdom, and wipes out.