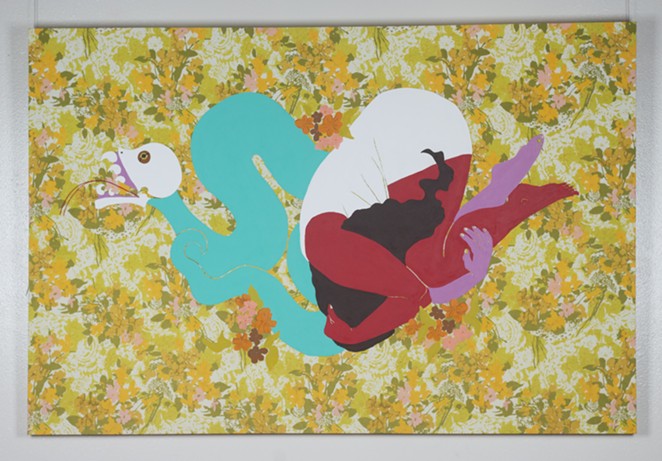 Courtesy of Audrya Flores
Like many San Antonio creatives, self-taught artist Audrya Flores believes strongly in rasquache — a DIY practice rooted in repurposing whatever materials might be at hand.

“I believe in using what you have right at your fingertips to make what you want to see,” Flores explained. A self-described “nature nerd” raised in a family of storytellers, Flores often turns to organic materials — cactus pads, lava rocks, marble chips and coffee beans among them — when creating artwork that puts an almost mythological spin on her own life experiences.

Born in Brownsville, Flores moved to San Antonio as a child when her father was hired to help build SeaWorld.

“We fell in love with it instantly and stayed,” she remembers.

After graduating from Holmes High School and earning an education degree from UTSA, Flores spent more than a decade teaching elementary school at a small charter school. Although she’d always drawn casually, Flores didn’t begin to take art seriously until her son was born eight years ago. During an admittedly hard time, she began to use art as a form of therapy to address personal struggles. Her early work resonated with the since-disbanded Chicana art collective Más Rudas, which curated her into the inaugural exhibition at Sarah Castillo’s Lady Base Gallery in 2013.

Since that pivotal moment — with materialized in a self-portrait painted on collaged brown paper bags — Flores has exhibited her work at galleries throughout San Antonio, Austin’s Mexic-Arte Museum and the Contemporary Arts Museum Houston. Standing out among the highlights are a snaking installation created for the group show “XicanX: New Visions” at Centro de Artes, a well-received solo show at Central Library last summer and “Angel Baby,” a haunting collaboration with fellow Rio Grande Valley transplant Lisette Chavez that put a feminist spin on the local urban legend of the Dancing Devil.

In the midst of self-isolation, Flores chatted with us via phone about her bordertown roots, her fascination with serpents and projects she has on the horizon. 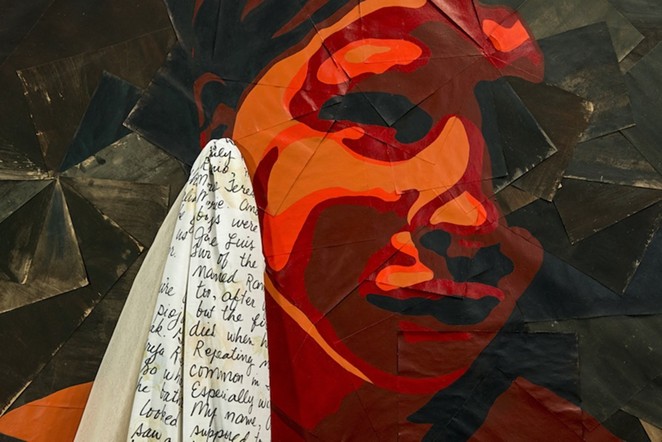 Courtesy of Audrya Flores
What was it like growing up in Brownsville?

I was only there until I was five, but I have really fond memories of it. I think being really close to the ocean shaped a lot of who I am. A lot of our family stories are linked to the power of the ocean — I come from a family of fishermen. We understood that where we were living wasn’t just a border between two countries, but we also met with the ocean. So, we understood that it was this powerful, maybe magical place, but a little scary too. I think we were in awe of where we lived. We were raised to have respect for the magic that was there. We knew that it was a sacred place.

When did know you wanted to pursue art?

I’ve always done drawings, little comics. I’ve always told stories. That’s a big thing in my family … but it didn’t become something serious for me until after I had my son. I had a really hard time — which I think is pretty normal for a lot of women. I felt like I had lost my identity … I couldn’t recognize myself anymore in a lot of ways. Not my body, my brain. You know, you totally reorganize your life to support this child, to keep this baby alive. It’s a huge responsibility and I felt lost in that process. [That’s] not to say I wasn’t super happy and super in love with my child. All of that was amazing. But I felt really lost, so art became this very serious tool for me to look back in and pull out who I was.

What can you share about your first exhibitions in San Antonio?

My first exhibition was in 2013, not long after I had my son. That was through Lady Base Gallery and it was curated by Más Rudas. … They were huge supporters of my work, and they kind of forced me into that [laughs]. I was super uncomfortable, but that was a catalyst for me. I felt like making the work and showing it and talking about it was really grueling. It was like torture [laughs] but then afterwards, when I was able to speak with people, [they] responded to the work. The work I made for the show was about being a mom who had a rough time having her baby and recovering. It was amazing connecting with people that [the work] resonated with. I was able to heal a little bit through that and [I realized] this is important: I need to keep pursuing this. [After that] Más Rudas curated me into Mexic-Arte Museum’s Young Latinx Artists (YLA) show in 2014. It was the 19th [edition], and it was all Latina artists. It was my first real museum setting, and there was a catalog and all of that. So that was huge. I’ve done other stuff through Lady Base and Más Rudas … they’ve been huge supporters of my work and pushed me a lot — into uncomfortable areas [laughs].

What did you contribute to the YLA show?

Two self-portraits. They were paintings, but they were on a collage of these upcycled pieces of cardboard. The paintings had fabric coming out of them that went down onto the floor. I had family stories written on [the fabric] reflecting my ties to my family and where I’m from — crazy, weird anecdotes from my childhood, scary stories, funny stories, problematic stories that my family told that helped shape my identity growing up.

How do you source the materials for your assemblages? Are they recycled or do you hunt them down?

Both. I believe in using what you have right at your fingertips to make what you want to see. I believe in not spending money, or a lot of money, if you can make it work in some other way. That’s huge for me — very rasquache. But I’m also a huge nature nerd, so a lot of the organic materials that I use, I don’t just pick them because they look beautiful. Well, I think they’re beautiful — they can stand on their own. A cactus pad, for example, is gorgeous on its own, but I try to really think about that plant’s role in nature and its characteristics and what it symbolizes if I’m using it in my work. … A lot of my paintings I do on sheets, like vintage bed linens, because I think there’s power in something that’s had a life before. They’re like ghosts in a way. They have their own residual energy that is very powerful. I like to weave that into telling my own stories.

Are those from thrift stores or from your family?

Both. I’m from a long line of hoarders [laughs]. It’s horrible. And there are a lot of fiber artists in my family, like quilt-makers. So, we don’t part with fabric. But I do go hunting — I’m an avid, avid thrifter. 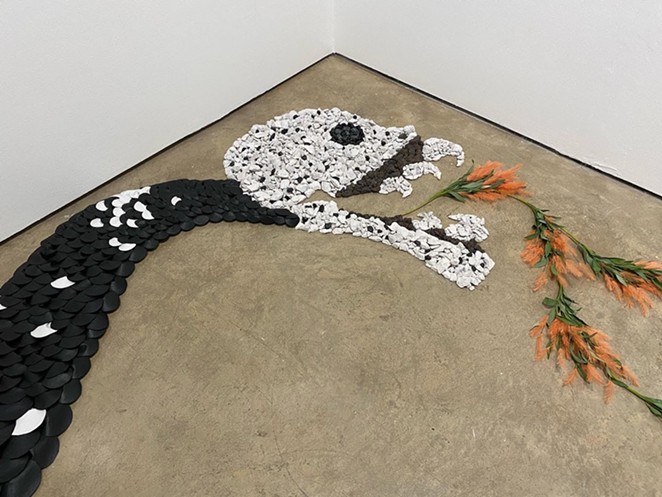 Courtesy of Audrya Flores
In your artist’s statement, you mention trauma, anxiety and healing as key concepts. How have those themes influenced your work?

I see my work as documentation of the work I’ve done emotionally. … Since becoming a mom, I’ve really wanted to get my shit together and be a person who was trying to continually grow, and that’s hard to do when you have a lot of unresolved trauma, when you have a lot of things that you refuse to look at. So, I’ve been on this crazy, healing, inward journey. I’ve done a lot of therapy and a lot of work on myself. A lot of work in the dreamworld, a lot of work with healers, a lot of work through meditation, and guided imagery and hypnotherapy … to resolve those issues and help me grow, so I can be the best mom that I can be — but also for myself. So, [in] my artwork, I try to document that. I try to tell those stories of those journeys and those wounds being healed with symbols — animals and plants. It’s my way to share what I’ve been through.

What do serpents mean to you? And is there a message behind the human skulls you place on them?

The serpent is such a complicated symbol. … It can have a lot of negative connotations, and I think it strikes fear in all of us, even if we’re fond of serpents. To me, it’s a very feminine symbol. It’s something that is constantly shedding and changing as it grows. … When I think about a snake shedding, I think about it rubbing itself against rocks and trying to rid itself of [its skin]. It’s a very traumatic thing that they go through, but that’s the only way to get into this new, beautiful, shiny form — the only way to move forward. And [with] the women in my life, myself, I’ve seen that. To survive that trauma and shed that skin and … get through these obstacles in order to move forward. I also think the serpent symbolizes life and death. … I think that’s really beautiful. … The life and the death, the light and the dark: that’s all part of this perfection that’s nature. For this particular body of work, I placed the skull on the serpent because I wanted people to really see themselves in it. [It’s] to remind us of our own mortality, but I also wanted it to look fearsome. The serpent in all the self-portraits I did [for the Central Library show] answered my cry and it came to me to devour my trauma, to devour my pain, and to devour me. And then I go on to become a newer, shinier, smoother form of myself. I just thought, if I was to call on something, and beg of something to help me devour my trauma — which is this huge monster — I needed something fierce and fearsome, something scary and slightly disturbing and creepily beautiful [laughs].

And you’re also fascinated by the occult. Have you always been?

Oh, yes. Growing up in the Valley, it’s nonstop scary stories [laughs] — spooky this, and devil this and witch this. And I’ve always been terrified. I’m a huge chicken. I’m afraid of everything, but I’m also extremely drawn to it. I find it exhilarating. So, anything dark, anything that goes against my Catholic upbringing [laughs], anything that’s creepy, spooky, scary, yes.

Do you and Lisette Chavez watch scary movies together?

[Laughs] We connect in so many ways. I cannot wait to see her solo show. It’s gonna be so good. She’s such a creepy girl, and I love her so much. Yeah, we’ve seen scary movies together, definitely.

What’s next for you and your work?

In the next month or so, I’m finishing up a painting for a show [organized by] the city. It’s scheduled for June 18 at Culture Commons Gallery at Plaza de Armas, and it’s called “The Status of Women in San Antonio.” There was a report commissioned by the City of San Antonio in 2019 on the status of women in San Antonio, and there were all these dimensions that were analyzed. They asked us to pick one of the dimensions, [and] my painting will be focused on domestic violence. Later in the year, for Second Saturday in October, I’m doing a strange dollhouse installation at Studio Fantomas, which I’m super excited about.