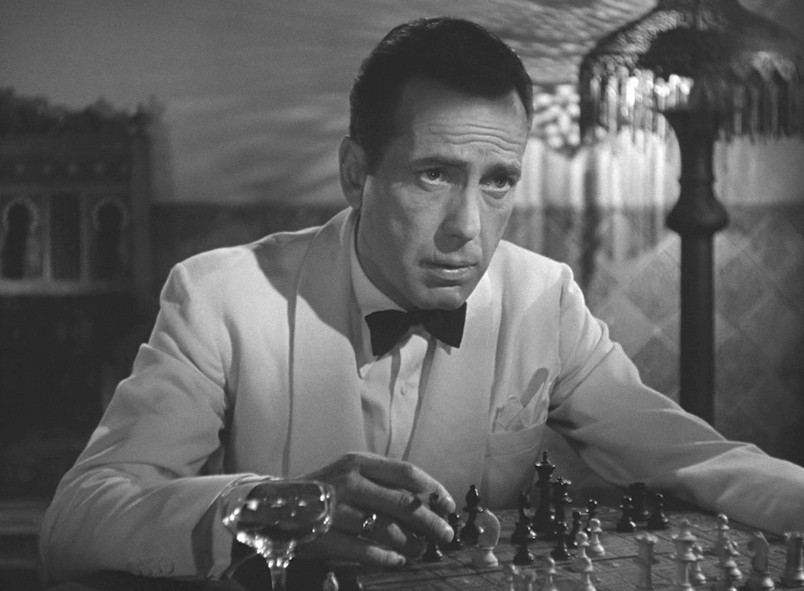 Like “As Time Goes By,” the wistful tune that Sam, the pianist at Rick’s Café Américain, plays again, Casablanca grows richer with repetition. While Citizen Kane remains the most admired American film, the one that grownups love the most might well be Casablanca. Though set in North Africa (but shot in California), it is very American, not simply because during the bleakest hours of World War II it unabashedly roots for victory over the Nazi foe. The United States is presented as a haven for the oppressed (though American borders were in fact closed to refugees), and English is spoken, implausibly if also imperfectly, by everyone in its celluloid Morocco. Casablanca, which kicks off this year’s Cinema Tuesdays series presented by Texas Public Radio, is a Hollywood Western transposed from Tombstone to a lawless frontier town in North Africa. Most of its scenes are set in a saloon.

The saloonkeeper, Humphrey Bogart’s Rick Blaine, is, like Shane (Alan Ladd’s 1953 character from the Oscar-winning, eponymous western), a solitary outsider who saves the community and then moves on. Though Rick feigns callousness, his native benevolence is exposed when he arranges for a desperate woman to win at roulette. But he insists that: “I stick my neck out for nobody,” demonstrating that cynicism is disappointed altruism. A frustrated idealist who supported underdogs in Ethiopia and Spain, he has come to Casablanca not for the waters, but to salve psychic wounds. During the fall of Paris, he was unaccountably jilted by Ilsa Lund (Ingrid Bergman), the love of his life, who now shows up with her husband, Victor Laszlo (Paul Henreid), a valiant leader of the Nazi resistance. Rick is stunned: “Of all the gin joints in all the towns in all the world, she walks into mine.”

Global catastrophe thus provides the stage for an equilateral romantic triangle. Rick, Ilsa, and Victor are each so sympathetic that the ending comes as a shock on each viewing and the screenwriters themselves could not decide whether Ilsa would go off with lover or husband until after shooting began. As if to undercut the mawkishness that might have overwhelmed a film that dares endorse love, friendship, courage, and devotion, Rick reminds Ilsa that: “The problems of three little people don’t amount to a hill of beans in this crazy world.” Bean-counters wield more clout than artists, but as long as a perfect balance of wit and sentiment counts for much, we’ll always have Casablanca.