Cruz-Trump 2016 Ticket? You Betcha SNL Would Beg For It 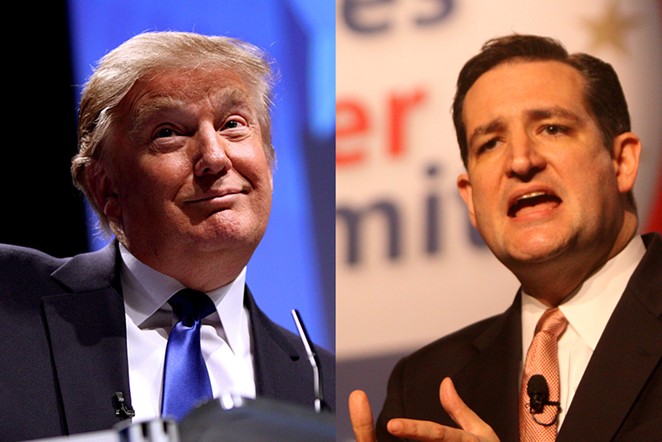 Wikimedia Commons
How's this for a Dream Ticket?

Probably wouldn't get far in a general election, but wouldn't it make for something most definitely entertaining to watch? Why, they'd serve up at least a year's worth of SNL skits just by announcing.

Tempting scenario, but even in the circus-like atmosphere that the GOP primary is already turning into, there's actually a much more realistic – and likely previously worked out – strategy between the two loudmouths.

He may still act all tough, but Trump has already publicly admitted not expecting the mega blowback he has received since unleashing his tirade against Mexican immigrants when he announced his run for the White House.

Trump has started feeling it in wallet, as numerous businesses have told him he's fired.

And though at first tepid, the backlash in political circles – particularly within the GOP – has also intensified. Other leading GOP presidential candidates chastised Trump, mostly for his poor choice of words.

Indeed, it has been mostly solo sailing for Trump since he came out with this campaign announcement and maintaining a steadfast defense.

Emphasis on mostly – Texan Ted Cruz has come to The Donald's rescue.

The Canadian-born and Houston-raised son of Cuban émigrés has become the lone public defender of the embattled billionaire, telling people Trump has a flair for "colorful language" and that his political stance is a sound one.

From the get-go, Cruz welcomed Trump to the ever-growing field of candidates vying for the GOP nomination, praising "his experience as a successful businessman and job creator."

But Cruz didn't stop there. Amid the barrage of attacks on Trump, Cruz put himself front and center as his personal shield.

The truth, such as basically saying millions of Mexican immigrants trekking north are criminals and rapists.

"I don't think you should apologize for speaking out against the problem that is illegal immigration," said Cruz, who is notorious for side-stepping the issue, particularly on specific steps on how to deal with it.

Trump was quick to recognize the Texan's overture, sending a heartfelt merci beaucoup through his 3.1 million Twitter followers.

Say what you will about Cruz, but it's highly likely that he didn't simply want to Trump to keep getting trumped by his critics. No, actually, there could be a political strategy brewing here.

It could possibly be the makings of the aforementioned Cruz-Trump ticket, though the more plausible scenario involves Cruz predicting that Trump will eventually head for the exit and, hey, he does actually have millions of diehard supporters and, well, they would need someone still in the race to support.

And they would not need to hesitate. They'd turn to Cruz, the only one who dared back Trump when everyone else threw him under the bus.

And obviously Cruz is in Trump's good graces already. In fact, Cruz is just about the only person whom Trump praises these days.

"I respect Ted Cruz for the view he's got. He was really out there and strong on it," Trump said on CNN, still trying to explain his immigration stance. "I shouldn't say this because, I assume, he's an opponent, but the fact is he was very brave in coming out."

Shrewd guy, that Cruz. Maybe a better politician than people think. Still unlikely he could win the GOP primary, never mind the general election, but props to him for keeping things lively.