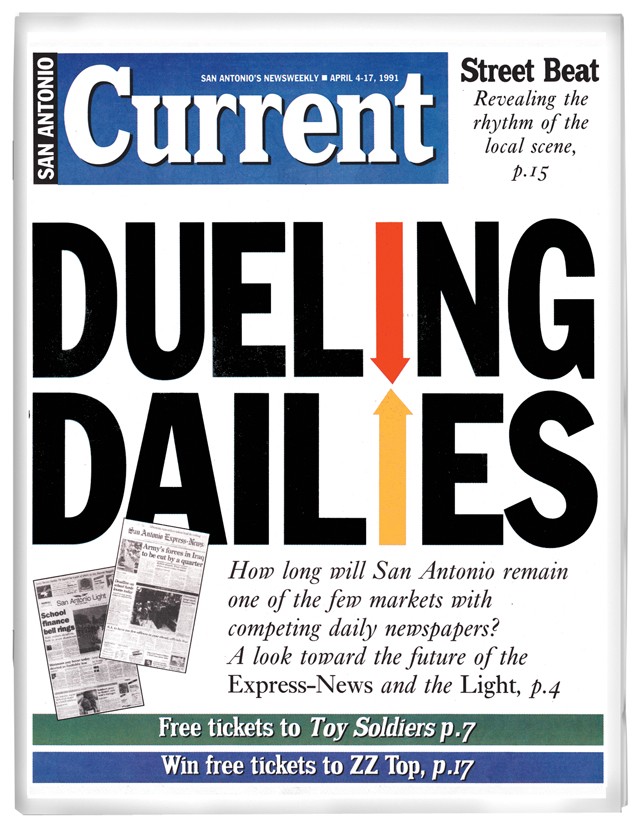 In October 1992, there were still 42 major U.S. cities with competing daily newspapers. Three months later, that number dropped by one as the Hearst Corporation axed its own San Antonio Light, making way for its newly acquired San Antonio Express-News.

Media mogul Rupert Murdoch purchased San Antonio’s News and Express newspapers in the ’70s, and by the mid-’80s had merged them into one operation, the San Antonio Express-News, hoping the consolidation could squash the competing Light. Former Light publisher Bill Thomas told the Current in 1992, “The first thing [Murdoch] did when he came in was tell us that he was going to have us out of business within the first year.”

The Light held on longer than Murdoch expected, and it was the Hearst Corporation that wound up shuttering its own paper. As Hearst’s media holdings grew, so did its appetite, and in 1992 the company announced it had struck a deal with Murdoch’s News Corp to buy the Express-News for $185 million.

To meet Justice Department anti-trust standards, the Hearst Corporation promised to launch an earnest search to find a buyer for the Light — though many critics at the time said the search was merely perfunctory. In 2004, former Light city editor Fred Blevens told the Seattle Times that the Hearst Corporation followed a media-buy strategy that would become all too common in the years to come — buy a competing newspaper at a premium, shut it down, boost ad rates, and then reap the benefits.

Two years after Hearst stopped the Light’s presses, Blevens, then an associate dean of the University of Oklahoma’s College of Journalism, authored a study looking at media conglomeration and captive newspaper markets. In that study, he challenged the Hearst Corporation’s claims that it approached dozens of potential buyers but couldn’t get a bite. Justice Department documents Blevens gathered for his study showed the company only seriously evaluated one potential buyer, and when the Newspaper Guild found a buyer willing to float the Light under a joint operating agreement with the Express-News, the Hearst Corporation rejected it.

Three months after Hearst announced the Express-News buyout, the Justice Department approved the sale and Hearst closed the Light, laying off some 650 employees. The Hearst Corporation is now a top-ten print media company, according to freepress.net, with 15 major newspapers and dozens of magazine titles.