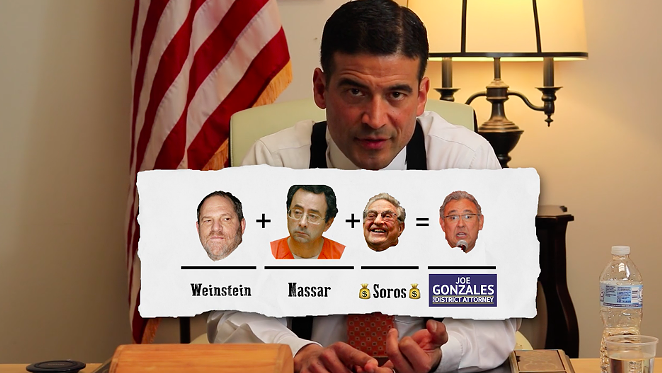 In March, Bexar County residents will vote on whether or not they'd like to see District Attorney Nico LaHood serve a second term as the county's top prosecutor. While the final decision will come after the November general election, the March primary will decide which Democratic candidate will make it to the next round: either LaHood or longtime criminal defense lawyer Joe Gonzales.

It's first important to understand the two attorneys' shared history. Both men were close acquaintances until March 2017, when a murder trial placed the lawyers on opposite sides of the courtroom. After LaHood disclosed at the last minute that one of his office's staffers had a sexual relationship with a witness in the case, Gonzales and his defense team called for a mistrial. LaHood's team then met with the lawyers in the judge's chambers to discuss the next steps with District Judge Lori Valenzuela. That's when LaHood allegedly threatened to "destroy" and "shut down" Gonzales' law practice if the defense continued to pursue a mistrial. Valenzuela has confirmed these threats taking place — while LaHood has consistently denied it ever happening.

According to an interview with the San Antonio Express-News, this confrontation ultimately inspired Gonzales to run against LaHood in 2018.

Since his initial campaign for office in 2014, LaHood has made a name for himself by taking down "bad guys" — like former San Antonio nurse Genene Jones, the man charged with killing a San Antonio Police Officer in broad daylight, the federal government (for promoting vaccinations he believes cause autism despite scientific evidence that they don't) and, now, Joe Gonzales.

In the video released Tuesday, LaHood (in his signature suspenders and slicked-back hair) addresses the camera with a stoney glare.

"I was hoping that it wouldn't get to political and personal attacks," LaHood says, before personally attacking his opponent in the campaign video.

Waving a glossy campaign mailer from the Gonzales camp, LaHood informs viewers that Gonzales has received out-of-state funding from notorious Democrat campaign financier George Soros. And then, LaHood turns to his opponent's career.

"[Gonzales] has specialized in defending people who rape women. He specializes in people who sexually assault children," LaHood said.

It's true, Gonzales has been paid to defend clients charged with rape or sexual abuse of a minor. But coming from LaHood, a former defense lawyer who once ran ads looking for clients accused of “any type of sexual offense,” the attack rings hollow.

He then takes it a step further.

"What does a rapist, a child molester and a billionaire by the name of George Soros all have in common?" LaHood asks, seeming to be setting up a deeply offensive joke. "They want Joe Gonzales to be DA of Bexar County."

Four photos pop up in front of LaHood as he speaks: one of Harvey Weinstein (accused of raping multiple women in Hollywood), one of Larry Nassar (convicted of sexually assaulting child gymnasts), one of Soros and then, Gonzales.

Without context, it would be dangerously easy to assume these headline-grabbing sexual predators have made the unusual decision to endorse a Bexar County District Attorney candidate.

"Please pass this information along," LaHood asks his viewers.