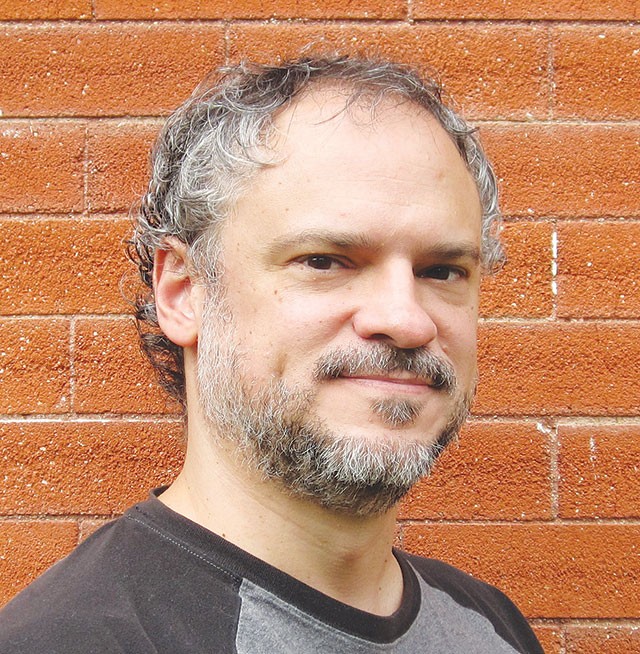 David Davalos says that his goal in writing Wittenberg, which opens November 1 at the Cellar Theater, was “to ruin Hamlet for anyone who sees it after this.” Davalos’ witty and wise theatrical mash-up, subtitled A Tragical-Comical-Historical in Two Acts, imagines the Prince of Denmark in college before the tragic denouement in Elsinore—not only torn between to be or not to be, but unable to decide on a major. Two famous professors, pious Martin Luther and skeptical John Faustus, contend for his allegiance.

Wittenberg received its world premiere in Philadelphia in 2008 and has been staged in 19 other cities, including New York, London, Berlin, Vancouver and Melbourne. The playwright—who is pleased that, as he says, “There have been no dog productions yet”—is in San Antonio not to intimidate director Bill Gundry and his cast during two weeks of rehearsal, but to play the part of Doctor Faustus. It is also a homecoming for Davalos, who caught the acting bug at Eisenhower Middle School and Churchill High School. He received a BFA in theater from University of Texas at Austin and an MFA in theater from Ohio University. He’ll be joined onstage by high-school chum Andrew Thornton, playing Martin Luther, in the Playhouse’s production.

Born in Alabama, where his father, Rudy, was assistant coach of the Auburn University basketball team, Davalos moved to Texas when Rudy was hired to be assistant coach of an ABA team that had just moved from Dallas—the San Antonio Spurs. In a career that earned him a place in the San Antonio Sports Hall of Fame, Rudy took over as UTSA’s first athletic director in 1976. Paternal legacy might have influenced a scene in Wittenberg in which Hamlet and Laertes face off in tennis.

Davalos had plenty of practice plundering literature and history for theatrical concoctions before crafting Wittenberg. He conflated Hamlet and Death of a Salesman for a piece titled New Yorick, New Yorick and had Leonardo da Vinci conversing with Lucrezia Borgia and Niccoló Machiavelli in Daedalus. Darkfall was written as a modern sequel to Paradise Lost. Over lunch at Green, he recalled playing Rosencrantz in a production of Hamlet and, during the long intervals offstage, pondering Shakespeare’s play in new ways. A couple of questions tantalized him: “What was Hamlet doing in school before Hamlet?” and “How did Hamlet get to the scene in which he spies on Claudius praying?” Davalos became convinced by Stephen Greenblatt’s contention, in his 2001 book Hamlet in Purgatory, that: “Hamlet is a Protestant play haunted by a Catholic ghost.”

Tom Stoppard’s Rosencrantz and Guildenstern Are Dead, which promotes two minions to leading men, is the classic of Shakespearean mash-ups, but Davalos rather pays tribute to Stoppard’s Travesties—“the Ur-play for an entire genre mixing the fictional and the historical. I just fell in love with that play.” He also has experience directing Steve Martin’s Picasso at the Lapin Agile, in which the Spanish artist and Albert Einstein meet at a bar in Montmartre. Crucial to Travesties, which throws together James Joyce, Vladimir Lenin and Tristan Tzara, is the specific setting, 1917 Zurich. Davalos became intrigued by Renaissance Wittenberg, where Hamlet spent his student years, but also where, on the entrance to All Saints’ Church, Martin Luther nailed the 95 Theses that launched the Protestant Reformation. “It was a time and place somewhat like Berkeley in the 1960s, a center for intellectual ferment,” says the playwright. By having Hamlet, Faustus and Luther interact in Wittenberg in October, 1517, Davalos casts light on and makes light of the philosophy, theology and politics that vexed the 16th century.

Rich in linguistic jest, Wittenberg would seem to defy translation, but Davalos reports that the Berlin production was performed in German, in a translation by Dorothea Renckhoff, who also rendered The Complete Works of Shakespeare (Abridged) into German: “If she could handle that, she could certainly translate my play.” He also notes that the American Shakespeare Center in Virginia has scheduled Wittenberg for its 2013-2014 season, in repertoire with both Hamlet and Marlowe’s Doctor Faustus.

Most plays live—if at all—only on the stage, but Wittenberg is alive on the page, in an edition published in 2010 by Dramatists Play Service. San Antonio audiences will be able to determine whether it also works in production. “By creating plays designed for both readers and spectators, Shaw, Shakespeare and Stoppard were able to bridge that gap between text and performance,” Davalos believes.

Davalos, his wife and young daughter live in Boulder, Colo., a university town not unlike Wittenberg. When not playwriting, he works, freelance, in corporate communications. His current theatrical project is to update the Divine Comedy. It is easy to think of contemporaries who ought to go to hell, but only a gifted playwright can imagine anyone from recent times who has earned a place in heaven.