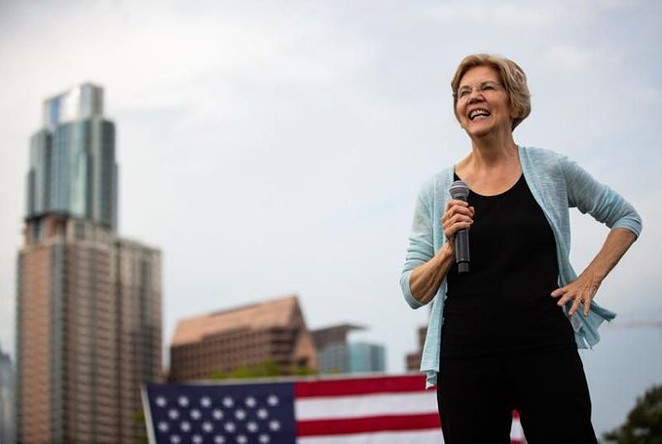 @keranews
Elizabeth Warren address the crowd during a campaign event in Dallas.
Democratic presidential candidate Elizabeth Warren's campaign will open San Antonio and Austin offices this weekend as part of an early focus on organizing in the Lone Star State.

Texas for Warren will open the offices Saturday, December 14, and host training for supporters interested in working with the campaign. Dallas, Houston and Fort Worth offices will follow in the next few weeks, according to a press announcement.

Warren ranks third in national polling for the nomination, behind Joe Biden and Bernie Sanders. Her early emphasis on Texas, long considered a write-off for progressives, could be another sign Dems think demographic changes have put the state into play.

Longoria worked on presidential campaigns for both Barack Obama and Hillary Clinton. She also serves on the board of Battleground Texas, a key Democratic voter mobilization effort.

Since hiring Longoria, Warren has brought on more than two dozen full-time senior staffers and organizers in San Antonio, Dallas, Fort Worth, Houston, Austin and the Rio Grande Valley, according to the campaign.