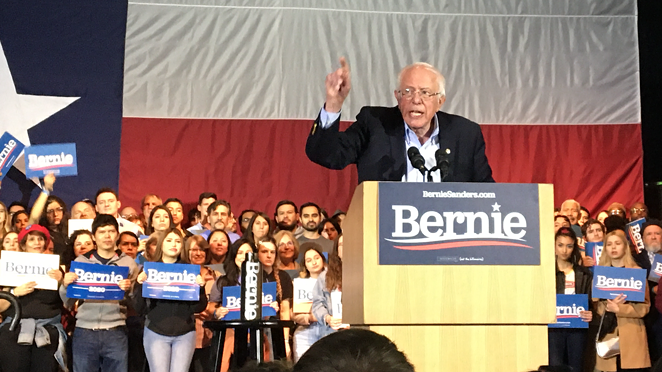 Mike McMahan
Democratic presidential candidate addresses the crowd at Cowboys Dancehall.
Fresh off a week that saw him cement his status as Democratic frontrunner, Bernie Sanders barnstormed through Texas with four stops that included a Saturday night rally in front of a receptive San Antonio crowd.

Sanders delivered an impassioned speech at the packed, 1,500-capacity Cowboys Dancehall, the audience periodically punctuating his talk with approving roars and chants of “Bernie!”

Event attendees were greeted by campaign volunteers, known as Berners, who directed traffic and guided people into parking around the venue. The vibe resembled more of an outdoor concert than a political event, and given Sanders’ popularity among younger “alt” types, the presentation was fitting.

The music thumping through the PA skewed contemporary, though it also included a few shoutouts for non-Millennials and Gen Zers, including Rush’s “Closer To The Heart” and Pearl Jam’s “Yellow Ledbetter.” SA-based Tex-Mex punk act Piñata Protest warmed up the crowd with a 20-minute set highlighted by vocalist Alvaro del Norte’s light-speed accordion lines.

After several guest speakers, including Kendrick Sampson of HBO’s Insecure, the man of the hour took the stage.

Sanders spoke in front of a massive Texas flag and introduced his wife Jane as “the next First Lady.” To anyone familiar with the candidate, the 25-minute speech probably felt like a greatest hits set. He skewered Trump’s corruption and lawlessness and called for social and racial justice. He also hit on key campaign promises: a $15 minimum wage, more funding for teachers, erasing college debt, healthcare reform, action on climate change, legal pot, enshrining Roe v. Wade as law and ending Trump’s “racist” immigration policies via executive order on his first day in office.

“Twelve years ago, we bailed out the crooks on Wall Street,” Sanders said. “Now it’s their turn.”

Attendees were also treated to the surreal sight of Nevada caucus results rolling in on the screen behind Sanders as he spoke, not to mention live CNN coverage of the very event they were attending. No fake news there, people.

Sanders walked offstage to Neil Young’s “Keep on Rockin’ in the Free World,” and the roar of the crowd showed approval both for the song and the candidate many seem to think embodies its timeless message.