Dennis Quaid Talks About His New Podcast, The Dennissance, and Filmmaking in Texas 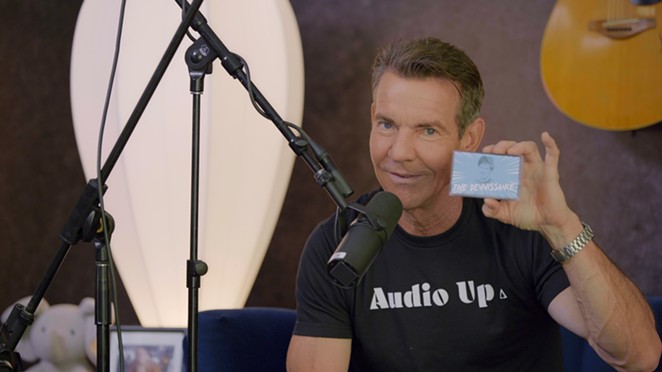 Audio Up Media
Add podcasts to film and TV actor, musician and avid golfer Dennis Quaid’s list of interests. The Houston-born native launched his first weekly podcast, The Dennissance, in April as part of his newly created podcast studio, Audio Up Media.

Ten episodes in and Quaid, so far, has interviewed a handful of his celebrity friends, including baseball star Albert Pujols, musician Clint Black and fellow actor Gary Busey.

Quaid jumped on the phone with the Current last week to talk about his new creative outlet and filmmaking in Texas.

When was the last time you were in San Antonio?

About five or six years ago. I have a place in Austin, so I’m always going down there. [My band] went on tour and at 4 a.m. in San Antonio, we stopped to look at the Alamo.

Your Breaking Away co-star Jackie Earle Haley lives here now, so we like to try and claim him as much as possible.

(Laughs.) Yeah, he’s a great guy. I talked to him a few weeks ago. We were trying to do a Breaking Away reunion, but so far, it’s not happening.

So far, 2020 has been a crap year. Can listening to the Dennissance get us back on track?

(Laughs.) Well, I don’t know if that’s going to solve all the world’s problems. But it has been good occupational therapy for me and keeping me busy. It’s been something we had been planning for a while. The Dennissance is only part of a whole slate of shows that we’re doing. I look at it almost like a movie studio, but instead of movies, we’re making podcasts across all genres.

What resonated with you about this kind of platform and made you want to host your own podcast?

I didn’t even listen to a podcast until a couple of years ago. Then, I was asked to do a podcast called Bear and a Banjo, a fictional story about America’s music through a couple of nefarious characters. We did it with T Bone Burnett and Bob Dylan and Jason “Poo Bear” Boyd and it wound up being the No. 2 music podcast. We had a blast doing it. It was like an old-time radio show. It really got me interested in listening to others.

How is hosting a podcast like acting, if at all?

Well, my favorite part of acting is researching a role to find out what makes that person tick. I bring that same sort of research to my podcast. I get to know something a little different about the people I know.

When you started listening to more podcasts, which ones did you gravitate to the most? I’m assuming the music ones caught your attention.

The music podcasts were very interesting. There is also something about history podcasts that I really love a lot. And true crime – who doesn’t love that?

So, now that you are more familiar with the podcast world, do you listen to them more than you do the radio when you’re driving around?

I still listen to the radio for news, but on trips, especially when you’re with somebody in the car, I like to listen to a story on a podcast and experience it with them.

So far, you’ve chatted with a couple of guests some listeners might consider a bit controversial, like Billy Bush. Is that what you’re looking to do with this podcast – to stir the pot a little?

Are you calling in favors right now to find guests? Is that how it starts?

A little Quaid pro quo? (Laughs.) There’s been a little bit of that, but I’ve been really lucky. I’ve been lucky in life. I’ve met quite a few people.

Are there any topics you’ll try to avoid? Politics, perhaps?

I don’t try to avoid any issue, actually. I’d like it to be open and raw and be able to let people talk. I’m kind of fed up with being politically correct.

Back in 2007, you stood next to then-Texas Gov. Rick Perry when he signed into law some film incentives to lure filmmakers to shoot more projects in the state. He said at the time, "I hope one day Texas will be the culture capital of the world. For now, I'll take not losing to Louisiana." Unfortunately, since then, Texas hasn’t figured a way to keep those incentives as attractive as states like Louisiana, New Mexico and Georgia. Has that been disappointing to see the state fall so behind in the last decade?

It really has. There used to be so many movies made in Texas. I did The Rookie and D.O.A. in Texas – in all, about six or seven movies. I love working in Texas. They had such great crews in the 80s and 90s and aughts. It just seemed to fall off the maps because [other states] are offering such great tax incentives. In Texas, I understood where Gov. Perry was coming from. It’s hard to get people out in West Texas like ranchers to understand that a movie [studio] would be getting a tax break. But these movies do bring a lot of money into the state and the tax breaks really are for the crew. I would love to see moviemaking come back to Texas.