Dentists and Wives Living Their Best Lives in San Antonio 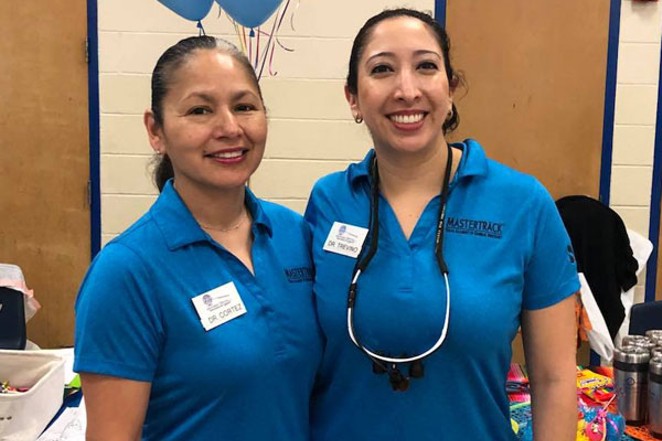 Photo via Facebook
This article was originally published by our sister publication Out In SA.

Once old age renders you ineligible for a sticker at the end of your visit to the dentist, there is little joy involved. That won’t stop the best of dentists from trying, however.

For example, Dr. Natalee Treviño Cortez, 36, will go so far as to sing mariachi songs to patients as she works on them. She is the official vocalist at Modern Dental SA.

Dr. Sandra Cortez, 54, is less confident in her singing abilities but will occasionally sing along with the radio. As a former navy corpsman, it is military-style leadership that she brings the table.

Both women are excellent dentists who also happen to be married to each other.

Treviño is a San Antonio native from the West Side. Eager to avoid working in a lab after earning a degree in chemistry from Texas Lutheran University, she worked as a dental hygienist before earning her dental degree from the Baylor College of Dentistry.

Dr. Cortez, from Brady, Texas, served in the navy for four years as a hospital corpsman before earning her dental degree from the University of Texas Health Science Center in San Antonio. The pair became a couple in 2007 and have been together ever since, traveling across the globe (Puerto Rico, the West Indies, and Hawaii are a few past destinations) and building their practice together.

While their relationship does not take up any spotlight at work, the doctors are proud to be queer and are adamant that patients know everyone is welcome. “We’d like to be a safe haven for our guests,” says Cortez. “We’re here to help. It’s just who we are. We’re here, we’re female, we’re gay, we’re taking care of families, restoring confidence, and helping our community.”

In addition to ensuring that all guests feel comfortable at their practice, the doctors are determined to be an active presence in the community. They have held food drives and provided free oral cancer screenings at local festivals. Most recently, they donated custom mouth guards to football players at Marshall High School. “We put their jersey numbers and school mascot on the guards. We met a lot of families and the boys were really excited. I gathered that no one had done that for them before,” Treviño says.

Both doctors recently received master’s degrees from the Academy of General Dentistry, a feat only one percent of dentists have accomplished. “It makes you a very well rounded doctor. I want to be able to take care of anything that comes through my door. It’s important that we do excellent dentistry. There’s a lot to learn,” Treviño says.

Treviño’s hard work has paid off. She is one of nine dentists in Texas who have been nominated for the New Dentist of the Year award by the Texas Academy of General Dentistry.

Commendations aside, it is clear from talking with both women that they don’t put in all this work for awards. They are passionate about helping patients, boosting confidence, and reducing pain.

“There’s a lot of gratitude that you get from people,” Treviño says. “Sometimes they’re really scared. You get to walk them through everything and help them. Some people are also really embarrassed and ashamed. Restoring their confidence is huge. It’s an amazing feeling.”