Don Pasquale at The Josephine 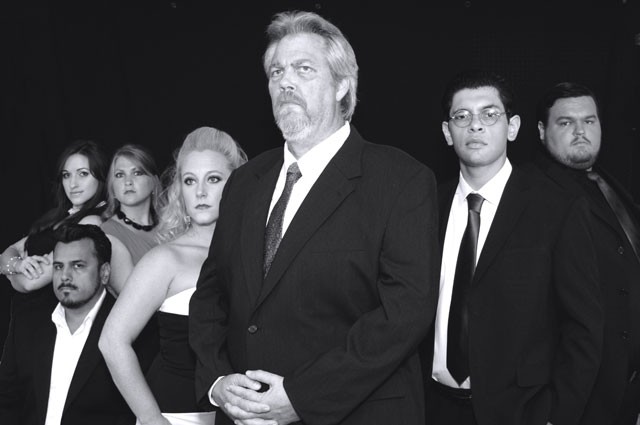 The show began with a chair squeak. High pitched and quickly echoed throughout the intimate Josephine Theatre, it served as starting gun for an equally high pitched performance of Gaetano Donizetti’s comic opera masterpiece, Don Pasquale. The culprit? An anxious member of the orchestra, directed by maestro Kristin Roach, settling in for two and a half hours of well-oiled accompaniment, no doubt.

“A usual orchestra for Donizetti would be about 45 and we did it with 10,” says Mark Richter, former kingpin of the now defunct San Antonio Opera and founder of Don Pasquale’s mothership, Opera Piccola.

The overture was mesmerizing; Roach and her 10 musicians teasing the 180 opening night audience members with bits of songs that were to come. Melting into their expressive yet intricate melodies, viewers became so entranced with the orchestra that it came as a surprise when the curtains finally lifted.

Led by Cynthia Stokes, director of the San Diego Opera, Piccola’s take on Donizetti’s Don Pasquale is certainly unique and shows the fledging company’s affinity for breaking the mold.

Ronald Ulen portrays the titular buffoon, Pasquale, as the big dumb lug that he’s meant to be. Bumbling about his mansion while muttering in a melancholy bass, Don Pasquale is, in this modernized English-sung version of the Italian bel canto classic, a New Jersey based mob boss. Don Pasquale indeed.

“An opera that’s over 200 years old just screams to be updated,” muses Richter. “My favorite movie is The Godfather and my favorite TV show is The Sopranos. Cynthia just went with it.” While at times disjointed, the result is certainly amusing.

While the famous comedy retains its basic plot, the modernization is apparent. Old oafish bachelor Pasquale plans to leave his family fortune to guido nephew Ernesto (portrayed by world renowned tenor Sergio Blázquez) and the wife which he has chosen for him. Ernesto poo-poos his uncle’s plan, instead falling in love with a blonde diva over a cup of Starbucks. Enraged, Pasquale decides to marry and produce his own heir in order to punish his rebellious nephew.

Unfortunately for him, his track-suit-loving physician Dr. Malatesta, played by the exquisitely voiced University of Cincinnati master’s student Brandon Morales, is in cahoots with Ernesto’s blonde vixen Norina (Aria-authority Clare Mortimer) to overthrow the old man. Malatesta passes the wily Norina off as his innocent little sister to Pasquale, who immediately weds her. Silliness ensues, epic songs are sung, etcetera.

While the innovative take on this classic comedy is fun and refreshing, the attempts at modernization come across as awkward at times. The “New Joisey” accent is almost non-existent, only appearing when the characters say “New Joisey.” Perhaps an entire opera sung in a Jersey accent would have been too much, but go big or go home, right? Also, the appearance of cell phones, Chanel bags and use of modern jibes such as “biatch,” seem a bit contrived when sprinkled between dainty interludes and arias. Then again, these touches certainly elicited some laughs and served as a reminder that we’re in 2012.

Overall, Opera Piccola’s second season opened with what is an innovative take on opera as an art form. Performed in the intimate setting of the Josephine Theatre with a minimalist set, this is not the opulence that comes to mind when one thinks about the opera. “It’s a no binoculars required kind of thing,” quips Richter.

Don Pasquale continues to break the mold with a tequila tasting before its September 13 performance. Tickets to that will be an extra $10. If you can’t make that, catch the show September 15 or 16 for just $30.