Don’s Plum: The DiCaprio Movie That Leo Doesn't Want You to See 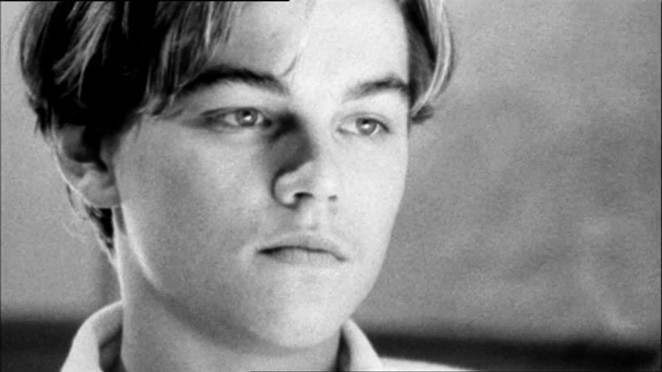 It’s the movie Leonardo DiCaprio and Tobey Maguire don’t want you to see, so much so that the two Hollywood superstars successfully sued its filmmakers, making it illegal for Don’s Plum to be shown theatrically or on home video within the United States and Canada. However, after 18 years of inaction and compliance on his part, producer Dale Wheatley has taken it upon himself to present Don’s Plum, in its entirety, via the Internet, making it now possible for DiCaprio and Maguire’s fans to finally witness this infamous and forgotten film.

Shot in just six days in 1995 and 1996 before Leo and Tobey had become household names, Don’s Plum centers around a group of friends who join together at the titular diner and after-hours bar to pontificate on life, demeaning both themselves and others in the process. The dialogue and actions of its characters are largely improvised, which may account for the rampant misogyny that permeates the film’s narrative. When one isn’t speaking with a filter that a written script affords, everything and anything can escape the actors’ mouths.

And yet, no matter what is said during this 80-minute conversation, the vitriol that spews forth from these young men’s tongues does not serve to amuse or to conventionally entertain. Their childish behavior, full of epithets and actions that blindly conform to the outdated machismo male archetype, is clearly indicative of scared human beings who desperately want to grow up but don’t know how to catalyze the maturing process. This pent-up frustration with their current stations in life, to these young men, is reason enough to justify their angry outbursts towards the opposite sex. The women in the booth are routinely referred to as “cunts” or “bitches,” and are repeatedly commanded to “shut up.” DiCaprio’s character is particularly vehement towards females as he throws a glass mug in the direction of a fleeing Amber Benson, the only woman who actually challenges these men on their degrading and primordial viewpoints.

So why do the remaining women continue to publicly ignore these aggressive verbal assaults? The answer isn’t that they are ignorant of the situation. The answer isn’t that they have the low self-esteem that would foster a self-destructive adherence to abuse. No, the answer resides in the filmmaker’s narrative decision to intercut the raucous and raunchy diner scenes with intimate moments in the diner’s restroom where each character speaks to themselves in the mirror, alone, and verbalizes their own personal reactions to what was said in the restaurant, feelings they don’t yet have the courage to voice when surrounded by their chosen peers.

It is in these sparse moments that we learn that these women don’t agree with how the young men treat them; these females’ coming-of-age confusion manifests itself through passive conformity rather than the outward aggression of their male counterparts. It is in these confessional moments that we understand these men’s own self-loathing and internal confusion on how to find their true selves, a process that will only gradually come in time. It is in these moments that the theme of Don’s Plum becomes apparent. The blatant misogyny and subjugation of women laced throughout the film may overshadow its filmmakers’ timely intentions, but at its heart, Don’s Plum is an ode to the growing pains inherent in the life transition from adolescence to adulthood. The young men in the movie might model their behavior after the man of old, but as the strong, insightful women of Don’s Plum know, these male characters are just “boys” made impotent and insignificant by the desperate desire to grow up too quickly in the fast-paced Los Angeles environment.

Don’s Plum is Swingers without the witty punchlines and upbeat, hopeful ending. It is a well-made American independent film (shot in black and white) that would have been embraced by the Sundance Film Festival audience at the time. However, the gritty, impromptu aesthetic of Don’s Plum, a signature aesthetic that was highly popular at Park City in the first half of the 1990s, has since given way to a more professional and polished presentation. As world-renowned filmmakers have begun to consistently premiere their films at Sundance, fewer micro-budget, independent films are admitted into Utah’s preeminent festival. It seems as if the days of no-budget films like Clerks and El Mariachi making waves at allegedly independent film festivals are behind us. Due to DiCaprio and Maguire’s successful legal actions, this film critic feels as if Don’s Plum has sadly missed its window of opportunity for reaching its maximum cinematic effect.


With that said, if you are a fan of Leonardo DiCaprio, Tobey Maguire, or '90s independent cinema, then it would be well worth your time to invest 80 minutes of your life to view Don’s Plum online.  But be swift in your viewing actions. You never know when DiCaprio or Maguire might successfully sue to stop Mr. Wheatley from distributing this lost film within the online arena.