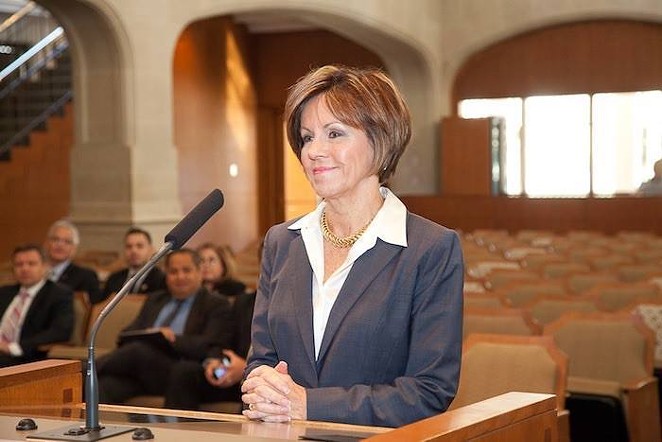 Here are the three proposed amendments to the city charter that have been the subject of so much hyperventilation over the last several months.

PROPOSITION A
Shall the City Charter be amended to expand the types of ordinances that may be subject to referendum including appropriation of money, levying a tax, granting a franchise, fixing public utility rates, zoning and rezoning of property; increase the number of days within which a petition may be filed seeking a referendum on an ordinance passed by council from forty to one hundred eighty days after passage of the ordinance; and to provide that no more than twenty thousand signatures of registered voters are required for a referendum petition instead of ten percent of those electors qualified to vote at the last regular municipal election?

PROPOSITION B
Shall the City Charter be amended to limit the term the City Manager may serve to no longer than eight years, limit the compensation of the City Manager to no more than ten times the annual salary furnished to the lowest paid full-time city employee, and to require a supermajority vote to appoint the City Manager?

PROPOSITION C
Shall the City Charter be amended to provide the International Association of Fire Fighters Local 624 with unilateral authority to require the City to participate in binding arbitration of all issues in dispute with the Association within forty-five days of the City’s receipt of the Association’s written arbitration request?

This is as they appear on the November 6 ballot.

The first one would have the most direct effect on how city government operates. When opponents fret about “mob rule,” as Tech Bloc did in advertising for its anti-proposition rally on October 11, this is what they’re talking about. The amendment would make it far easier to put far more types of city business to a public vote.

Don’t want to pay that SAWS rate increase those knuckleheads on city council approved, or think the utility didn’t make a strong enough case for the hike? Hate that rezoning decision that allows a massage business where the “therapists” use CBD oil to move into your neighborhood? Those kinds of actions aren’t challengeable under the city charter today, but they would be if voters approve the amendments on Election Day. And while you’d have to collect 70,000 signatures of real-life registered voters and have 40 days after passage of the ordinance to do it under current rules, you’d have four and a half months to gather more than two-thirds fewer valid signatures if Prop A passes.

But let’s get real here, San Antonians. You don’t want that stinky pot-oil massage parlor down the block from your house, and nobody has to ask you twice to rail against it on your neighborhood’s Facebook page or Nextdoor. But are you going to put in the time and money to collect signatures for a referendum? Probably not.

If Prop B passes, the opposition’s argument goes, the mantra for hiring San Antonio’s next city manager won’t be “the best and the brightest” but “the adequate and the most affordable.”

As of August, capping a new city manager’s compensation at 10 times the annual income of the lowest-paid city employee would translate to $290,000 per year, according to local economist Steve Nivin’s analysis. Compare that to the $325,000 starting salary of Austin’s city manager or the Dallas city manager’s 2017-2018 pay of $375,000. Both cities are economically more successful, but also smaller than San Antonio.

Do you expect great things from your most powerful city official? Pray for a whiz kid willing to take relatively lower pay to make a name for him- or herself in the nation’s seventh-largest city – before moving to a city government that pays real money. Or a talented native San Antonian – maybe a deputy or assistant city manager under Sculley – who would accept the pay cap for the chance to improve his or her hometown.

The limit of eight years on the job would mark a big shift in power between the city council and the city manager. Among the stuff you never hear about in public is the fact that council members are at the mercy of City Manager Sheryl Sculley and her staff for a lot of the deliverables they want for their districts – for the timing of street repairs, for example, or the opening of that new park. Most council members work to maintain friendly, agreeable relations with Sculley and her people in part because they don’t know how much longer she’ll be around – it could be years to come for all they know. That uncertainty is one of her strengths. The result is council members falling in line far more often than asserting themselves. An eight-year term limit would upend that state of affairs, which is exactly what the fire union is trying to do with Prop B.

Prop C is the most nakedly self-interested amendment pushed by the San Antonio Professional Firefighters Association. It would block the city from taking a contract dispute with the fire union to court.

Here’s the city attorney’s office’s take on the proposition: “Under the proposed measure, the Union could call for binding arbitration before participating in any good faith labor negotiations with the City which could have substantial negative impacts on the City’s budget.”

The proponents’ answer has essentially been: Better that than allowing the city to waste more than $1 million in taxpayers’ money to fight a losing battle against the union, as it did over the last several years with a lawsuit to end the “evergreen” clause in the fire union’s contract.


Coming Out in the Wash

Underlying all of the campaign stuff – the TV ads and the Facebook videos and the mailers – put out by the business-backed Go Vote No campaign is this argument: These three charter amendments would create a lot of uncertainty about all kinds of municipal spending, including for streets and other basic services, and the city’s financial condition – and that’s bad for business.

Opponents routinely describe the propositions as politically akin to a meteor strike that will kick up so much debris that it’ll block the sun and plunge us into a new ice age. An economic impact study done by Nivin and commissioned by the city estimated the potential damage of the three propositions at somewhere between $382 million to $4.2 billion over the next 20 years.

Nivins’ report raises the specter of employers thinking twice before considering San Antonio as a place to invest in and create jobs. Wall Street also detests uncertainty, which is why a couple of credit-rating agencies have warned of cuts to the city’s AAA bond rating if voters approve the propositions, which would cost millions every year in higher interest rates.

In other words, Wall Street likes the status quo.

Now, if you vote for council and mayoral candidates because of their good judgment and because they have their communities’ interests at heart, this proposition doesn’t make much sense. But our faith in institutions such as City Hall had been eroding for decades. Then along came Donald Trump, and, well, you know…

Unique to San Antonio, however, are concerns about Sculley, who’s been on the job for 13 years. The fact is, a lot of San Antonians believe her compensation is too rich – she earns $450,000 and her most recent performance bonus was $75,000 – even though she manages a 12,000-employee enterprise with an annual budget of $2.8 billion. They’re also worried she has amassed too much power – see, for example, her decision in March to overrule the Historic Design and Review Commission to clear the way for an apartment project next to the Hays Street Bridge.

The fire union is trying to harness those fears to keep any future city manager – and the city’s budget – on a short leash. Theirs is a raw, demagogic power play that would wind up damaging San Antonio’s future prospects, though maybe not to the tune of $4 billion, if voters OK the propositions.

But this outcome too would be harmful to San Antonians: If the Go Vote No campaign prevails and, as a result, elected officials and business leaders might feel justified in continuing to ignore legitimate complaints about Sculley and the lack of transparency at City Hall.