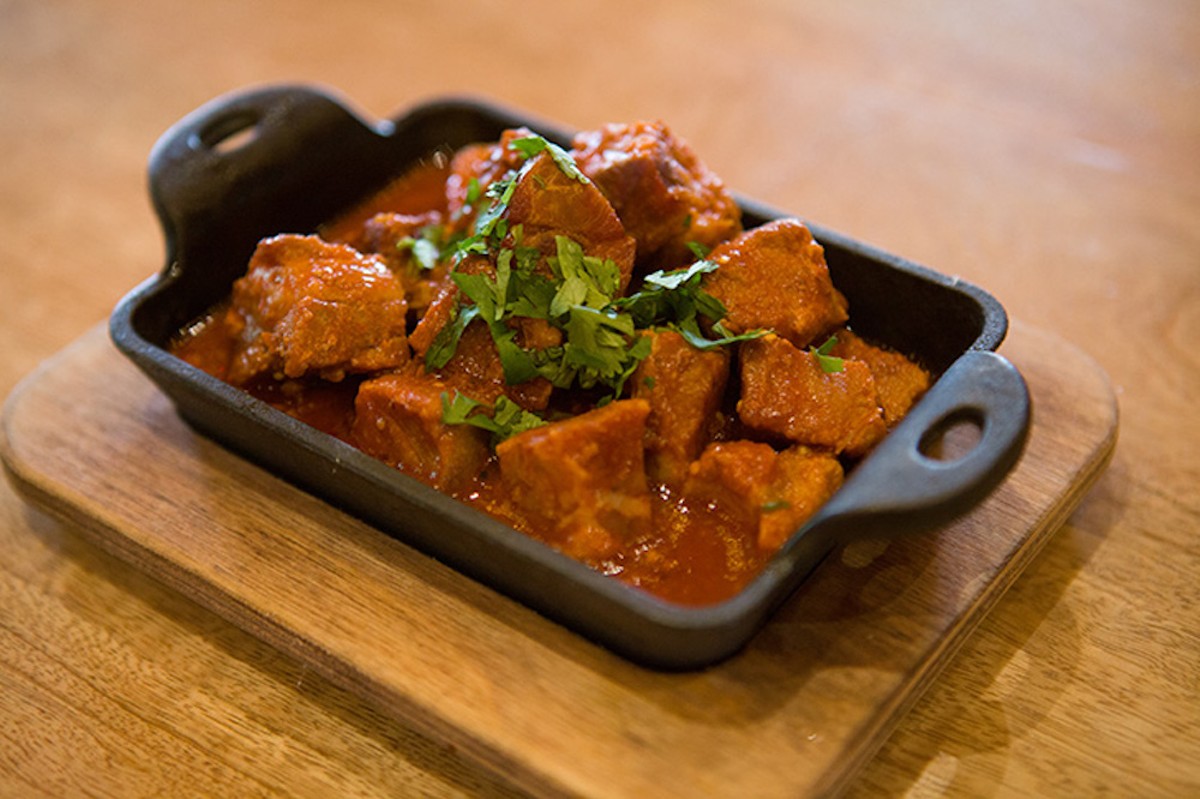 Give the cazuelitas a chance.

Viva Villa is the Cortez clan's latest venture in the family compound that is Market Square. Filled with rustic woods, exposed brick, nostalgic photos and a catch-all collection of light fixtures, it's flashy, fun and more than holds its own with venerable Mi Tierra next door — an institution that has had generations to evolve into a beloved caricature of itself. It's also helmed by a this-gen family member, Cariño Cortez, who just happens to be a graduate of the Culinary Institute of America-Hyde Park and the kitchens of the equally impressive restaurants of Jean-Georges Vongerichten in New York and Rick Bayless in Chicago.

Step right up to the counter and place your order. Unlike other Cortez operations, this one's quasi-cafeteria style, so if something doesn't look appealing to you on the line, give it a pass. This is what I should have done with the esquites, the grilled corn that is a staple of street corners all over Mexico. Shaved from the cob long before it was served (this was admittedly toward the end of an evening), the charred kernels were cold, dry and chewy, relieved primarily by a modest dusting of queso fresco and a few bits of cilantro.

Green chile con queso comes to you in a clay cup flanked by a raft of chips. The name suggests that chile will dominate — or at least participate equally. You will now have guessed that it doesn't. There are just a few strands on top of the melted cheese mixture. That mixture, however, is an unexpectedly rewarding blend of sharp cheddar and avocado — smooth, creamy and in need only of a little more thermal heat and the zing of a few more rajitas de chile. This could easily become the perfect bar snack with one of Viva Villa's craft or Mexican beers on tap or in bottles or cans. (The drink list is otherwise confined to wine and wine-based margaritas.)

The strong suit of two visits was decidedly the puerco en chile colorado. Served in a small cast-iron cazuelita, the price ($10.25) may seem a tad steep for a dish without a grain of rice or a smear of refried beans, but the lustrous sauce was deep, dark and magical, the cubes of pork were tender and flavorful in their own right, and they were plentiful enough to satisfy. Somewhat less successful were the hongos en chipotle meco. The mecos are normally smokier in flavor than the darker, redder morita chipotles we see more frequently, but that smokiness didn't come through. Instead, the quartered button mushrooms floated in a kind of tan gravy that was creamy, lightly spicy and pleasant — though maybe better over rice than in a tortilla. All cazuelitas (ribeye and cochinita pibil are among other possibilities) come with tortillas for your taco-making pleasure. Convinced that it's harder to turn out good corn tortillas than flour ones, I always go for corn as a test. Though they are said to be made in-house, the de maiz models I picked for the puerco prove the point.

For its part, the flour tortilla cradling my Pancho Mercado taco was almost crackery in its delicacy. Consisting of chopped carne asada with sliced avocado, grilled onion and beans with bacon, the mix may have been missing its advertised queso blanco, but it was flavorful and good regardless, with crisp and salty parts balancing the moister bits. Balance was at the heart of the excellent puerco al pastor street tacos, too. Here, the contrast to the crusty shaved pork came from the fresh pineapple, onion and cilantro. The street-size corn tortillas are way better than their big sisters, by the way, but understand: This is a DIY effort. The tortillas line the bottom of a canasta with the chopped mix ladled over them, jumbled-nacho style. More than some assembly is required. As a reward for my inevitably messy efforts, I briefly contemplated a Big Red soft serve ...

I did, however, try the coconut tres leches cake. As best I can tell, the coconut designation comes from a few wisps of the toasted variety adorning the twist of whipped cream atop this dessert assembled inside a plastic container. (If coconut milk is involved, it's not apparent.) Cubes of pretty plain white cake fill the cup, and as all the good, milky stuff is on the bottom, you are advised to dig deep before taking that first bite.

The Skinny: Viva Villa adds to the Cortez complex in Market Square with a cafeteria-style operation centered on tacos and cazuelitas.